Algeria: Are We on the Brink of Another Arab Spring? 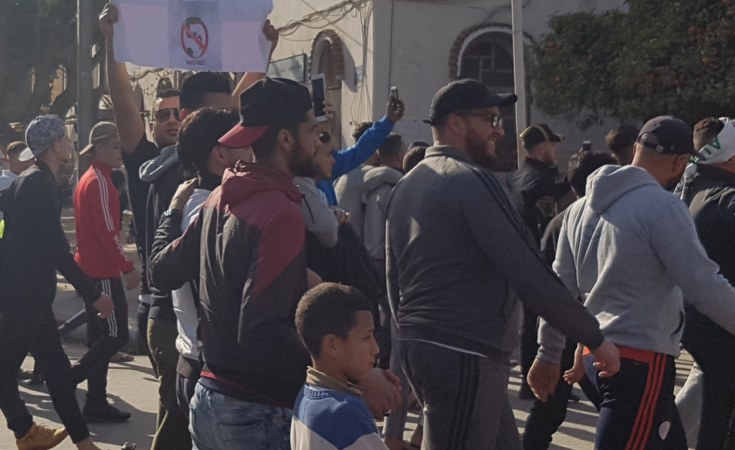 Are anti-government protests in Algeria the herald of an Arab-spring sequel? Some regional autocrats appear to fear so and are cracking down on even the mildest of dissent, say analysts.

For weeks now in Algeria, tens of thousands of protesters drawn from all walks of life have been chanting the Arab-spring mantra, “The people want the regime to go.”

Their hopes of seeing an end to the 20-year-long autocratic rule of President Abdelaziz Bouteflika, who’s rarely been seen in public since suffering a stroke in 2013, have been boosted in the past 24 hours by the intervention of the Algerian army.

Algeria's army chief of staff demanded Tuesday the president be declared unfit to rule, saying he considered the people's demands to be valid and that the presidency should be vacated. “We must find a way out of this crisis immediately, within the constitutional framework,” said Gen. Ahmed Gaed Salah, speaking on national television.

The protests against Bouteflika began last month after the president said he planned to stand for a fifth term.

But it isn’t only in Algeria that protesters in North Africa and the Middle East are venting their anger and once again taking to the streets to demand change.

Protests have also been staged in Iran, Tunisia, Iraq, Jordan and Morocco.

And in the Gaza Strip, anti-Hamas protests have erupted recently against tax increases amid demands for better living conditions. Hamas, the militant Islamist movement that controls the coastal enclave has resorted to beating up and detaining demonstrators and arresting journalists.

“The conditions are there for the re-emergence of an ‘Arab uprising’ narrative,” according to Marc Lynch, a political scientist and author of the book "The Arab Uprising: The Unfinished Revolutions of the New Middle East." In a commentary, he added: “Many activists online have again attempted to craft one, built around solidarity among different Arab societies.”

The grievances now appear to be the same as those that fueled the Arab spring — lack of economic opportunity for the young, rising joblessness, stagnant economies, impoverishment and harsh security policies, say analysts.

Sudan’s latest protests were triggered by the government’s decision to triple bread prices. Food prices have jumped since January after the government stopped state-funded wheat imports.
Despite the lifting of U.S. economic sanctions on Sudan, the Sudanese pound has plunged in value against the dollar and international banks remain wary of doing business there.

Algeria has suffered economically with the halving of oil prices. Corruption has reached unprecedented levels and social inequality has increased. A quarter of Algerians under the age of 30 are unemployed and have little prospect of securing work.

As in the Arab spring, regimes have not been slow to crack down on the emerging protests, which as before appear spontaneous and are largely leaderless. Even mild, peaceful dissent is earning punishment. In Bahrain the relatives of an outspoken rights activist, who’s living in exile in Britain, have been jailed after being accused of planting a fake bomb in the kingdom. Rights groups and the United Nations say the case is trumped up and a means to take revenge on the exiled activist.

But there are differences from the Arab spring, too.

Protesters in one country aren’t seeking solidarity with counterparts in neighboring countries in the way they did before. This is both a conscious choice, say some observers, as well as a reflection of how regimes are now better at policing the internet and social-media sites.

Another element that’s different is that Arab satellite channels are less forthright in their coverage of the demonstrations and are treating them as isolated local events rather than a regional phenomenon, according to Marc Lynch.

“Arabic broadcast and social media were key factors in transforming Tunisia’s and Egypt’s 2011 uprisings into broader Arab uprisings. Media allowed Arabs across the region to view events there as part of their own story,” he argued in a commentary for the Carnegie Endowment, a Washington DC-based think tank. “Broadcast media, above all Qatar’s pan-Arab satellite television station Al-Jazeera, were critical for bringing this protest narrative to a mass audience,” he says.

He believes the coverage is shaped by politics and that every regime in the region is anxious about an Arab spring sequel, understanding they all have something to lose. So they are all restraining their pan-Arab stations, even when it means losing the opportunity to embarrass regional foes and rivals.

Protesters seem to understand that. They are also being more controlled. In Algeria, anti-government activists are “aware of the risks of an escalation” and are being careful to remain non-violent, argues Youcef Bouandel, an academic at Qatar University.

Algerians Protest for Sixth Week, As Army Calls for Bouteflika to Go

Algerian President Bouteflika Resigns
Tagged:
Copyright © 2019 Voice of America. All rights reserved. Distributed by AllAfrica Global Media (allAfrica.com). To contact the copyright holder directly for corrections — or for permission to republish or make other authorized use of this material, click here.