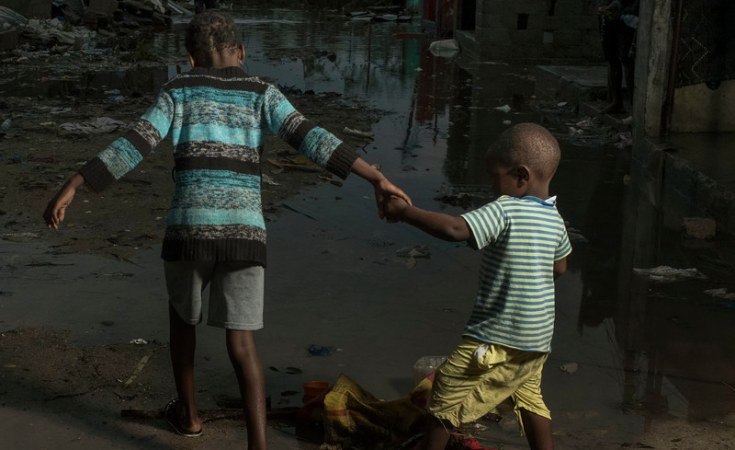 Josh Estey/CARE
Praia Nova Village was one of the most affected neighborhoods in Beira. Being a located on the coast, this shanty town of loosely built homes were extremely vulnerable to the high winds and rain. Following the cyclone families are returning trying to pick up the pieces of their lives.
Thomson Reuters Foundation (London)
By Nita Bhalla

Nairobi — Thousands of children who survived a cyclone in southeast Africa face fresh risks in its aftermath - being sold into slavery by human traffickers or forced into early marriage by families struggling to survive, aid workers say.

Traffickers often prey on lone children caught up in chaotic scenes such as Cyclone Idai, they said, while parents might marry off their young girls as they struggle to eke out a life.

At least 678 people have died and nearly 3 million have been affected after Cyclone Idai hammered Mozambique's port city of Beira on March 14 before moving inland to neighbouring Malawi and Zimbabwe, the United Nations said.

Idai's winds ripped apart homes, schools and medical centres and torrential rains triggered floods that inundated vast swathes of farmland in one of the worst climate-related disasters to hit the southern hemisphere.

With the U.N. estimating up to a million children affected in Mozambique alone, aid workers are particularly concerned about orphaned children and those separated from their families who are fending for themselves almost two weeks on.

"In crises like these big, natural disasters, children and parents can easily lose one another," Rik Goverde from Save the Children charity told the Thomson Reuters Foundation by phone from Chimoio, 200 km (125 miles) northwest of Beira.

"Children are out there on their own - without the supervision or care of a trustworthy adult. They can easily fall victim to sexual violence or human trafficking. We are aware and very concerned about it."

Goverde said that one mother he met had lost three children, swept away in flood waters, while other colleagues had come across children who had seen their parents die.

The charity's helpline had received about 10 calls from families reporting missing children, he said, though this was likely "just the tip of the iceberg" as some telecommunications and power lines were still down.

Reports of missing children and unaccompanied children are being registered by the International Committee of the Red Cross (ICRC) on their website, he said, with the priority being to reunite families as quickly as possible.

About 350 people registered on the website - either looking for missing relatives or marking themselves as safe. About 24 children are registered as missing, with teams on the ground collecting more names of the lost and missing.

Mozambique is a source, transit, and, to a lesser extent, destination country for men, women and children who are trafficked into forced labour and sexual slavery, according to the U.S. State Department's 2018 Trafficking in Persons report.

Children are often forced to work in sectors such as farming and mining. Women and girls are often lured to cities in Mozambique or South Africa with promises of employment, only to be sold into domestic or sexual servitude, it added.

The breakdown of social institutions makes it hard to find food and humanitarian supplies, leaving women and children at risk of kidnapping, sexual exploitation and trafficking.

Aid workers say young girls could also be forced to wed as parents who have lost homes and crops are pushed to the brink and seek ways to ease the burden on the rest of the family.

"Mozambique is already among the top 10 countries in the world with the highest rates of child marriage - around 48 percent of girls are married before 18," said Anne Hoff, Plan International's Country Director in Mozambique.

"We do know that when there is a drought and there is a lack of food, we tend to see an increase in early marriages. There is a high risk it could happen as the crops have been destroyed and it will be very difficult for people to recover."

Nearly Half of Cyclone Idai's Victims Are Children

Over A Million Children Still Reeling From Cyclone Idai's Impact
Tagged:
Copyright © 2019 Thomson Reuters Foundation. All rights reserved. Distributed by AllAfrica Global Media (allAfrica.com). To contact the copyright holder directly for corrections — or for permission to republish or make other authorized use of this material, click here.