Nigeria: Osinbajo Blames Past Govts for Nigeria's Lack of Progress 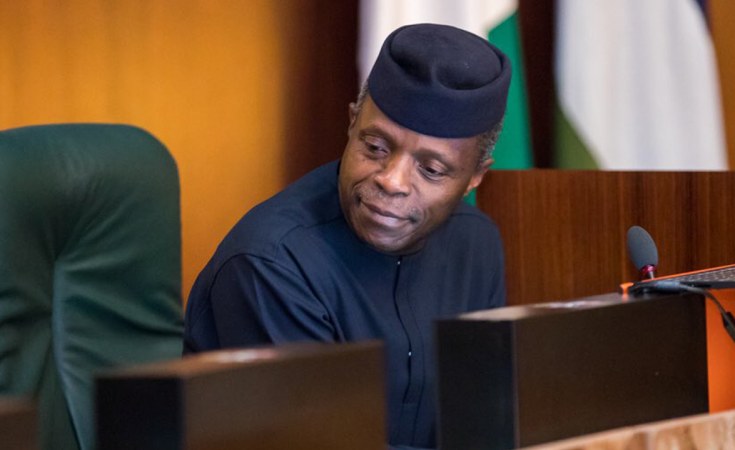 The major problem facing Nigeria is lack of integrity on the part of its leaders, Vice President Yemi Osinbajo has said.

Mr Osinbajo said the ugly trend reared its head more especially with past leadership of the country.

He made these remarks while speaking at the 11th colloquium of the All Progressives Congress (APC) leader, Bola Tinubu, on Thursday.

He blamed past governments for being wasteful in times of abundance.

"I have said it before, Nigeria's main problem is not a lack of ideas, it's not. Most of the time, especially with the leadership of the past, it is lack of integrity in leadership and corruption in particular and it is the reason we are finding it difficult to make any progress.

"That is why we earned $383 billion in four years - 2010 to 2014 - the highest ever in the history of our country and yet Lagos-Ibadan expressway not done, all of what is being done today not done.

"We cannot point to a single major project, a single major infrastructure project that was completed in the ten years period despite the high wealth, including power. So, a government coming after so many years of waste must be a government that first, emphasises fiscal prudence, a government that emphasises integrity in public finance so that we manage the little resources we have to achieve the maximum that can be achieved and that is what President Muhammadu Buhari has set out to do."

Mr Osinbajo, who served as Attorney-General and Commissioner for Justice in Lagos State during Mr Tinubu's administration, eulogised the APC leader

"We do it (the colloquium) in celebration of a man who has spent the last 30 years of his life in creative public service. Right from the days of being Lagos governor, he provided clarity of thought and rare vision in all aspects of life.

Mr Osinbajo thereafter reeled out the aspirations of the Buhari administration under the next level mantra.

Describing it as biggest in Africa, he said the government is working to expand the Social Intervention Program (SIP).

IMF Cautions Nigeria, Others on China Loans
Tagged:
Copyright © 2019 Premium Times. All rights reserved. Distributed by AllAfrica Global Media (allAfrica.com). To contact the copyright holder directly for corrections — or for permission to republish or make other authorized use of this material, click here.

It's a Date! Kenya to Open Schools on October 19
Governance