Nigeria: Tinubu to Buhari - Give Nigerians Better Life in Your Next Term 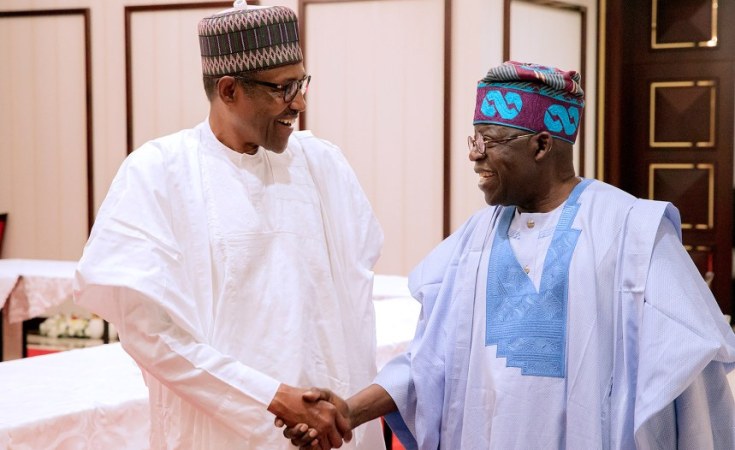 All Progressives Congress, APC leader, Asiwaju Bola Ahmed Tinubu, yesterday, charged the Muhammadu Buhari administration not to burden the citizenry with foreign economic models that bring penury as it projects towards the next level.

Tinubu spoke at the 9th Bola Tinubu Colloquium that was hosted as part of his 67th birthday anniversary.

The event which was marked with the attendance of some of the country's leading political figures was, however, not physically graced by President Muhammadu Buhari and Governor Ibikunle Amosun, two party stalwarts who were present at the pre-election 8thColloquium held in Lagos last year.

Tinubu, whose speech was entitled, "Work for the people that the people may work for themselves", pointed out that in a bid to achieve the desired economic boom for Nigeria, the government must resist the temptation to blindly follow the economic path of other nations.

Tinubu also warned against the planned increment of taxes by the government, saying it would worsen the poverty levels of the common people.

The former Lagos governor suggested that the government could widen its tax nets rather than raising taxes in order not to exacerbate the plight of the people.

After assessing the economic models and performance of many leading countries and highlighting the challenges associated with them, Tinubu counselled Buhari that a conscious effort must be made to build the Nigerian economy to work better for Nigerians as he assumes his second term in office.

What Buhari must do in Next Level

Tinubu said: "Our pursuit of the Next Level cannot be achieved by blindly following the economic path of other nations. That would be tantamount to racing to live in a building just as its long-term occupants were frantically rushing out, screaming that the edifice was mean and crumbling. If we are smart, we dare not enter.

"Instead, we must construct our Next Level on a progressive ideology and vision that will take our people out of penury, diversify our economy more aggressively, and empower and retrain our youth.

To be the great nation we purport to be, we must reform and retool our economy according to our definition of what is best for our own people. We cannot assign that duty to anyone else.

"We must amend our basic ideas about the economy. We must divorce ourselves from our fixation with GDP rates and similar statistics. These things were initially intended to be indicators, suggestive measurements. However, we have misinterpreted these road maps by treating them as if they were the destination itself.

"This has caused us to distort the organic relationship between the people and the economy. This dominant train of thought has made the people servants to the dictates of abstract economic theories. In a more effective system, the economy would be fashioned to serve the concrete needs and legitimate aspirations of the people.

"Our economy must be redefined to be an efficient yet moral social construct with the primary goal of optimizing the long-term welfare of the people through the sustained, productive and full employment of labour, land, capital and natural resources.

"In the current global context, the best translation of laissez faire economics is "let's stay poor" economics. To believe that we are at our best when everyone focuses solely on maximizing their own position is to believe that one hundred hands can clutch at the same naira note but no one will get scratched.

"To pull the nation from poverty, government must play a decisive role. It must at times direct and even develop markets and opportunities. This is nothing novel. I am only restating what the established economies did when they were young and assumed their trajectories toward growth.

Yet, how do we organize ourselves to meet this task?

While praising Buhari for taking bold steps to improve the economy, he nonetheless pleaded with him to dedicate his second term to changing the very structure of the economy for the better.

Tinubu also identified the provision of infrastructure as the single most important sector which the government must pay priority attention to, saying the provision of stable power would speed up development across the land.

He stated: "Affordable and reliable power will drive the industrialization that shall provide jobs in our cities and produce needed goods for all our people. In a more poetic rendering, it will take our people out of the dark ages and bring the nation into the light of a better day.

"I believe the second Buhari administration will work to increase electricity generation, transmission and distribution by more than 50 per cent within the next four years.

"We require serious and bold reforms to achieve this. What is happening to our gas pipelines? Whatever we have to invest now for our future is a task that must be done boldly. The PDP administration shared out generation, distribution and transmission to their friends and cronies without very deep and thoughtful research and evaluation. It has now become pork chops. This privatisation must be revisited. Put experts together for a more constructive reform to improve generation, transmission and distribution by any means necessary. We cannot afford to be too legalistic about this.

"Also, we should push to end the practice of billing people for electricity they never received. This practice is a vestige of the past that should not accompany us into the future. people should be charged accurately and only for the power that they use.

"Government should continue to aggressively implement its national infrastructure plan. We must commit ourselves to a national highway system linking our major cities and towns, our centres of commerce, with each other. This will save lives, spur commerce, cut costs and bring Nigerians closer together.

How to tackle incessant flooding

"Water catchment and retention systems in strategic locations should also be introduced to end the destructive cycles of flood and drought affecting many areas.

"In working to transform the face of our economy, government must also enact policies that encourage industrialization and modern agricultural practices. We must applaud President Buhari for the historic innovations made in the agricultural sector. We must further encourage him to do even more. Government funded social security for the aged and government backed affordable housing and mortgage facilities are things we must continue to explore in an aggressive manner.

"In the end, our future is uncertain until we enter it and make of it what we will. We can either let the future happen to us or summon the courage to make the future belong to us as other nations have done. I don't think we really have a choice in the matter. We must take the people to the next level. It is a promise made and thus a promise that must be kept.

"Our goal is nothing less than enabling people to enjoy lives free of penury and lack. We seek to constitute a nation where all have basic sustenance and sufficient food on their tables, a sturdy and sheltering roof over their heads and the fair chance and means to sustain and further enrich their lives as they see fit. Let it be that all may live in social contentment and tranquillity with his neighbour as well as with himself. This is what we mean by the Next Level.

Vice President Yemi Osinbajo, who stood in for Buhari at the event, took a swipe at previous administrations in the country for wasteful spending and for leadership deficiency, which resulted in diversion of huge revenue without anything tangible to show for the huge cash.

"I have said it before, Nigeria's main problem is not a lack of ideas, it is not. Most of the time, especially with the leadership of the past, it is lack of integrity in leadership and corruption in particular and it is the reason we are finding it difficult to make any progress.

"That is why we earned $383 billion in four years - 2010 to 2014 - the highest ever in the history of our country and yet Lagos-Ibadan Expressway not done, all of what is being done today not done.

"We cannot point to a single major project, a single major infrastructure project that was completed in the 10 years period despite the high wealth, including power. So, a government coming after so many years of waste must be a government that first, emphasises fiscal prudence, a government that emphasises integrity in public finance so that we manage the little resources we have to achieve the maximum that can be achieved and that is what President Muhammadu Buhari has set out to do."

Osinbajo, who served as Attorney-General and Commissioner for Justice in Lagos State during Tinubu's administration, paid glowing tribute to the celebrant, describing him as a leader who has championed democratic and economic reforms both in Lagos and Nigeria.

The Vice President noted: "We are here today to celebrate a man who has spent the last 30 years of his life in creative public service. Right from the days of being Lagos governor, he provided clarity of thought and rare vision in all aspects of life.

IMF Cautions Nigeria, Others on China Loans
Tagged:
Copyright © 2019 Vanguard. All rights reserved. Distributed by AllAfrica Global Media (allAfrica.com). To contact the copyright holder directly for corrections — or for permission to republish or make other authorized use of this material, click here.