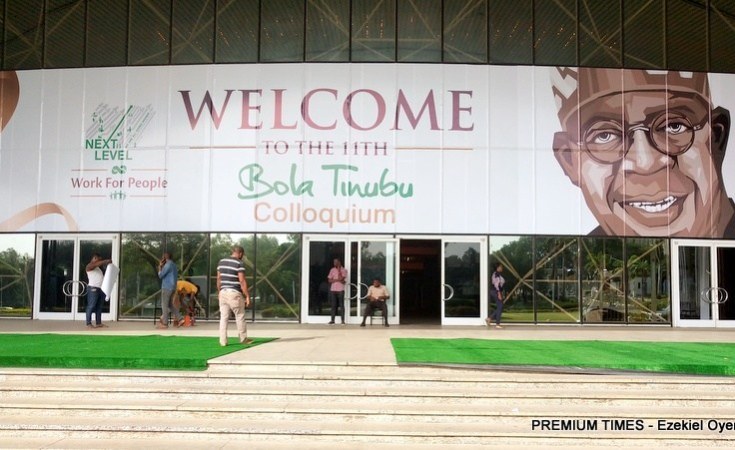 Tinubu gave this warning while making his closing remarks at the 11th Bola Tinubu Colloquium, in commemoration of his 67th birthday at the International Conference Centre (ICC), with the theme: 'Next Level, Work for the People.'

According to the former Lagos State governor, the timing of the proposed VAT increase is wrong, advising the government that instead of increasing VAT in this moment of economic upheavals, the government should rather broaden the scope of tax collection with a view to making more people pay and thus put paid to any planned increase in VAT rate.

He said: "Consumer spending is slipping and this is where I will stop and appeal to Professor Yemi Osinbajo and his team to put a huge question mark on any increase of VAT please. If we reduce the purchasing power of the people, we can further slow down the economy. Let's widen the tax net.

"Those who are not paying now, even if it is inclusive of Bola Tinubu, let the net get bigger and take more taxes and that is what we must do in the country instead of additional layer in taxes."

Tinubu also said the world was at the verge of another economic recession, saying Europe was already grappling with unfavourable economic experience, adding that the forecasters had predicted another round of recession within the next 12-18 months.

He advocated the need to heed this global warning and swiftly rise up to confront it by cogitating and working harder to put the imminent economic crisis under check, pointing out that he was not raising alarm but rather doing the needful by making the information at his disposal available so that Nigeria could proactively evolve necessary policies.

Tinubu explained: "Even without Brexit, the EU itself has entered a rough patch. The Euro zone may already be in recession. Stock markets experience wild swings that speak to an underlying weakness and pessimism about the immediate future.

"Forecasters are predicting a global recession within the next 12-18 months. I render these observations not to frighten anyone but because they ring true. Wisdom requires that we accept reality instead of obscuring it under the cloak of wishful thinking.

"I would be a most wicked friend if I knew a storm was approaching yet convinced you to ready your family for an outdoor picnic under the tallest tree. The truth is always a more valuable guardian than fantasy."

Tinubu also counselled the federal government to reposition the economy more effectively in a way that it can meet the yearnings and aspirations of Nigerians, saying in ideal situations, economies are positioned to meet the legitimate desires of the people.

He further advocated the need to redefine the economy to reflect moral values with the overall goal of improving the long-term welfare of the people and consequently guaranteeing sustained, productive and full employment of the factors of production.

The former governor added that the government must play decisive roles that can lead to the development of market opportunities if it wants to pull the country out of poverty.

According to him, "This dominant train of thought has made the people servants to the dictates of abstract economic theories. In a more effective system, the economy would be fashioned to serve the concrete needs and legitimate aspirations of the people.

"Our economy must be redefined to be an efficient yet moral social construct with the primary goal of optimizing the long-term welfare of the people through the sustained, productive and full employment of labour, land, capital and natural resources...

"To pull the nation from poverty, government must play a decisive role. It must at times direct and even develop markets and opportunities. This is nothing novel. I am only restating what the established economies did when they were young and assumed their trajectories toward growth."

On power, Tinubu canvassed what he described as affordable and reliable power supply to drive industrialisation that will result in job creation and production of needed goods and services for Nigerians.

Submitting that doing so would end years of darkness and bring the country into a brighter experience, he said he expected the federal government to devote its next administration to increasing electricity transmission, distribution and generation by over 50 per cent.

"I believe the second Buhari administration will work to increase electricity generation, transmission and distribution by more than 50 percent within the next four years," he stated,

Also speaking at the occasion, Vice-President Yemi Osinbajo paid tribute to Tinubu's perceived uncom mon qualities, revealing how he acted on his instruction to hire 63 foreign forensic experts, which according to him exposed how the Peoples Democratic Party (PDP) allegedly rigged the defunct Action Congress of Nigeria (ACN) out at the 2007 governorship elections in the South-west.

According to Osinbajo, it was the first time in history that an army of 63 foreign forensic experts would be lined up for only one purpose following his trip to the United Kingdom.

Osinbajo said Tinubu came up with the suggestion against the background of the belief that the ACN governorship candidates in the South-west states at the 2007 elections were rigged out through multiple voting and how it was only through the identification of fingerprints that the alleged rigging could be exposed.

The vice-president, who said he had earlier argued with Tinubu on the impossibility of his suggestion, added that his position was only echoed by a renowned forensic expert, Adrian Forty, when he got to the United Kingdom, explaining how Forty laughed off his idea when he first discussed with him.

He said the forensic expert told him that in about 40 years of his forensic expertise, he had never captured 4,000 fingerprints and wondered how it could be possible to audit over 1 million ballot papers as suggested to him.

However, Osinbajo said the breakthrough later began when Forty called him for discussion over the matter later, saying reopening discussion on the matter resulted in the eventual assembling of 63 forensic experts including 10 of them from the UK Police.

Osinbajo further disclosed that eventually, when the 63 experts began to work, the fingerprint audit they carried out showed how each voter cast his/her vote within five seconds when ordinarily it could not have taken a voter less than five minutes to cast his/her votes.

The vice-president added that it was the forensic audit which helped the ACN to reclaim its alleged stolen governorship mandates one after the other in the South-west with Osun State being the last state recovered from the PDP three years after.

In his welcome address, the governor of Lagos State, Mr. Akinwunmi Ambode, described Tinubu as a man of high political dexterity, courage and political acumen, saying his birthday anniversary this period was timely, coming at the time he just "stirred the party to victory at the general election."

According to the governor, now that the APC has spread its tentacles across the country through the output of the elections, people now look towards the next level, adding that the development makes the theme of the occasion appropriate.

One of the guest lecturers at the occasion and the Minister of Industry, Trade and Investment, Dr. Okechukwu Enelamah, said at the next level of the current administration, Nigeria would be led into the age of industrialisation through the creation of six economic zones in each of the geo-political zones of the country.

According to him, the pilot phase of the special economic zones will take-off in Aba, Abia State (South-east), Funtua in Katsina State (North-west) and Lekki in Lagos State (South-west) with the target revenue of $30 billion.

Enelamah also said the project would grow the gross domestic product (GDP) to the tune of 20 per cent and create 1.5 million jobs which he said would eventually lead to 30 million jobs in future

In his own lecture, Special Adviser to the President of Africa Development Bank (AfDB), Prof. Banjo Oyeyinka, said the next level would involve agri-business, which he said had been projected to guarantee a $1 trillion economy in Africa as he advised Nigeria to strive hard to achieve 20 per cent of this $1 trillion goal.

While stating that the strategy to achieve this goal is agri-industrial processing, which he said would reduce unemployment, he noted that unemployment leads to stunted growth and economic inefficiency while job-driven growth raises the quality of life and consumer spending.

Also speaking at the occasion, a Brazillian, Kleber Guarany, disclosed the recent bilateral development programme that was sealed by Nigeria and Brazil in January with the intention of taking Nigeria from the traditional farming system to mechanised farming.

He listed the features of the agreement to include: $1.11 billion investment in Nigeria, which he said would eventually lead to the creation of $12 billion money in circulation within the next 10 years, adding that 9,302 tractors would be assembled under the scheme.

Tinubu to Buhari - Give Nigerians Better Life in Your Next Term

IMF Cautions Nigeria, Others on China Loans
Tagged:
Copyright © 2019 This Day. All rights reserved. Distributed by AllAfrica Global Media (allAfrica.com). To contact the copyright holder directly for corrections — or for permission to republish or make other authorized use of this material, click here.