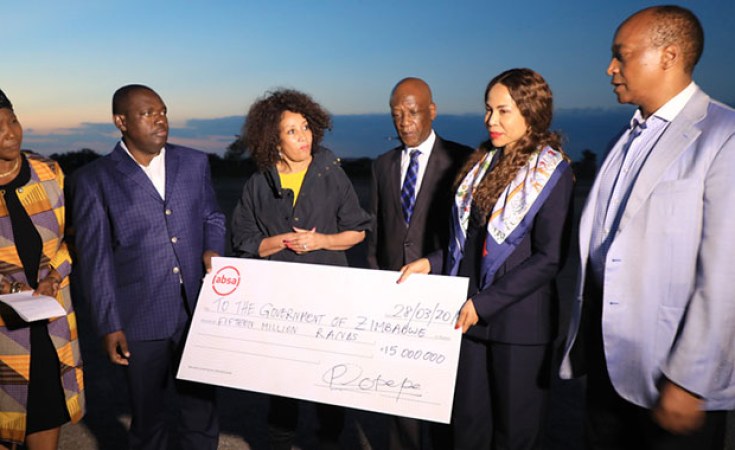 THE government of South Africa and businessman Patrice Motsepe's family yesterday donated a combined R75 million to victims of Cyclone Idai in Zimbabwe.

The cyclone mainly affected Chipinge and Chimanimani in Manicaland Province as well as some parts of Masvingo.

The South African government donated R60 million, while the Motsepe family chipped in with R15 million.

Speaking after the donations Minister Sisulu, who was accompanied by the Motsepe family, said the donations to Zimbabwe followed President Cyril Ramaphosa's call for the people of South Africa to respond to the disaster caused by the cyclone.

"We have decided as a Department of International Relations to make a financial donation apart from other donations that are coming your way," she said.

"This is what we have brought to you at short notice to assist you provide the urgent relief to the affected," she said handing over the cheque to Minister Moyo.

"We are in great pain and what you have done gives us a lot of hope when we find that we have friends around us who have a big heart, big hand who donate both in kind and cash towards the disaster to help us address the challenges our people are facing," she said.

She said the disaster that struck Zimbabwe, Malawi and Mozambique was a wake up call that must never be taken for granted.

"This challenges us to be always prepared for natural disasters as a region and continent and put in place mechanisms to deal with such disasters," she said.

"The donation will go a long way in our quest to provide assistance to the affected people."

He said the South African government and its people had shown empathy.

"We look forward to such kind of interaction, assistance and brotherhood to continue," he said.

Minister Moyo assured the South African government that Zimbabwe would remain grateful for the assistance.

Cyclone Idai has killed close to 200 people and left a trail of destruction especially in Manicaland Province.

Government has released $100 million towards the disaster but it is not enough considering the extent of the damage.

Mozambique's Children at Risk from Trafficking After Cyclone Idai
Tagged:
Copyright © 2019 The Herald. All rights reserved. Distributed by AllAfrica Global Media (allAfrica.com). To contact the copyright holder directly for corrections — or for permission to republish or make other authorized use of this material, click here.