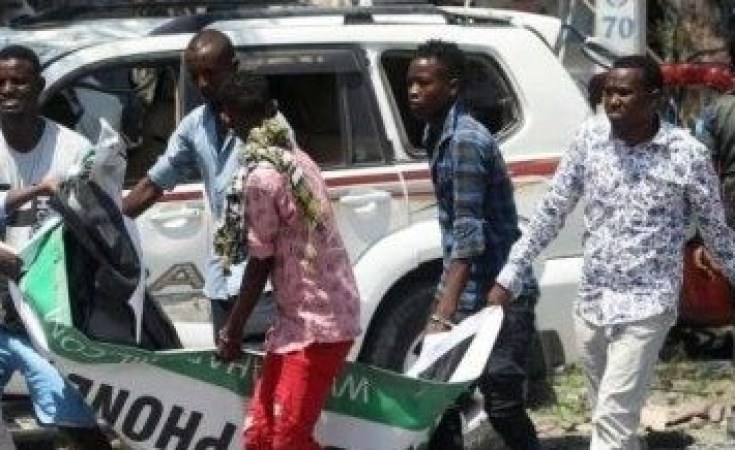 Radio Dalsan
Civilians carry the dead body of a man killed in a car bomb explosion near a hotel in Mogadishu, Somalia, March 28, 2019
Dalsan Radio (Mogadishu)

A man who was denied asylum by the United States and deported back has been killed by a roadside bomb in Mogadishu.

Ahmed Salah had sought refuge, arguing that Mogadishu was not safe enough for him and his family, but the immigration judge declined his plea and ordered him back.

Unfortunately yesterday, he was killed in a roadside bomb, leaving behind a wife and two young children.

Ahmed Salah was one of the victims who died in today's attack in #Mogadishu. Ahmed was recently deported from USA. I met Ahmed in South Africa 7yrs ago bt immigrated to #USA during 2015 xnephobic attack in #SouthAfrica since thn he was in journey passed through 10 countrie... . pic.twitter.com/hm9tCAuqNd

His death adds to the worrying statistics in the recent weeks in which Al-Shabab militants have mounted targeted attacks killing and maiming hundreds of people.

President Donald Trump's reversal of long-standing immigration policies was bound to impact the Somalis, one of the largest African immigrant communities in the US. Over the last few years, Somalis in the US have become the microcosm of the debate surrounding immigration, refugee resettlement, and national security.

During the presidential elections, Trump also singled out Somalis multiple times, accusing them of coming from "dangerous territories," fraying social nets, and blamed faulty vetting processes for allowing a large number of Somalis to come to states like Minnesota, Maine, and Ohio.

Panic in Somalia Over Kenyan Army Pullout
Tagged:
Copyright © 2019 Dalsan Radio. All rights reserved. Distributed by AllAfrica Global Media (allAfrica.com). To contact the copyright holder directly for corrections — or for permission to republish or make other authorized use of this material, click here.