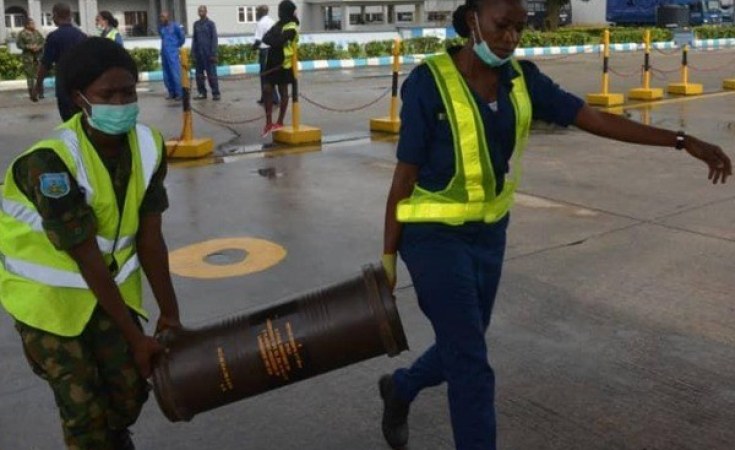 Abuja - Following the circulation of a video showing military officers including NAF personnel, flogging suspected bandits in Zamfara State who were apprehended and disarmed to extract information, the Nigerian Airforce has instituted a board of inquiry (BOI), to ascertain the personnel involved and try them.

In a statement titled, "Re: Reported Flogging of Suspected Armed Bandits in Zamfafara State" the NAF said the action of flogging unarmed bandits is contrary to its directives that the rights of innocent civilians and captured bandits should be respected.

The statement was signed by Air Commodore Ibikunle Daramola, Director of NAF Public Relations and Information.

It said, "The attention of the Nigerian Air Force (NAF) has been drawn to a video and some pictures circulating on some social media and online platforms showing some military personnel flogging suspected armed bandits at Shinkafi Local Government Area (LGA) in Zamfara State.

"The NAF has discovered that some of its personnel were part of the joint team stationed at the Galadi Sub-Sector at the time.

"The joint team had, sequel to intelligence reports, intercepted a group of suspected armed bandits, including some fighters from across the border, at their Sububu Forest hideout whilst they were on the verge of executing an attack against innocent civilians in Shinkafi.

"In the process, the team recovered one AK-47 rifle along with 3 loaded magazines and 3 dane guns from the bandits.

"In an effort to obtain further information on the criminals' plans and the location of their armoury, the troops employed unauthorized, crude corporal methods.

"The NAF wishes to state unequivocally that the troops' actions of flogging and physically assaulting the disarmed suspects were totally unacceptable and not in consonance with the Standing Operating Procedures (SOPs) guiding the conduct of the operation.

"Our personnel have always been directed to respect the rights of innocent civilians as well as captured combatants, no matter the provocation.

"The public is to please note that the NAF has zero tolerance for such human rights violations and has since initiated appropriate action to address the anomaly.

"In this regard, a Board of Inquiry (BOI) has been set up by the Headquarters Special Operations Command (HQ SOC) to determine the remote and immediate causes of the incident with a view to ensuring that appropriate disciplinary action is taken against all NAF personnel found culpable.

"The public will be kept informed on the outcome of the investigations.

Regardless of claims of violence in S/East, S/South, 2019 polls freest since 1959 -- Junaid Mohammed

"The NAF, as an organization, wishes to state that it remains a professional fighting force that will continue to operate within the ambits of all relevant laws and procedures, as well as in line with international best practices, whilst remaining fully accountable to the Nigerian people."