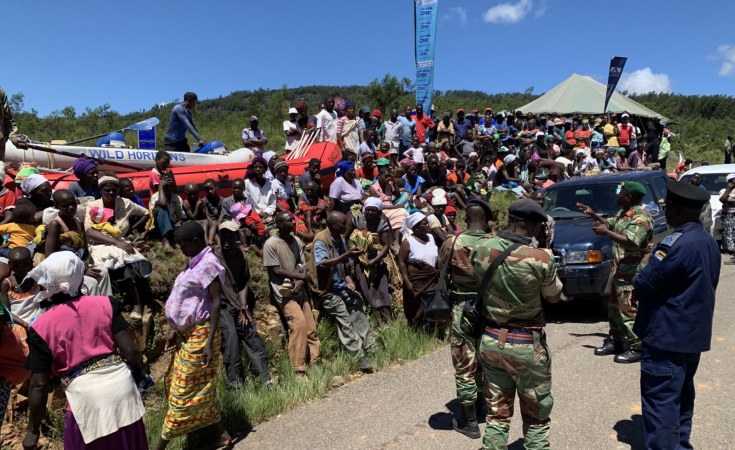 Photo: Columbus Mavhunga/VOA
People in Chimanimani complain to senior army officials in charge of a temporary camp set up after Cyclone Idai that food is not reaching them.
The Herald (Harare)
By Rumbidzayi Zinyuke and George Maponga

A high-level Cyclone Idai reconstruction and resettlement taskforce has been put together to facilitate the effective resolution of challenges faced by the disaster management teams in the affected areas.

The taskforce is chaired by Chief Secretary in the Office of the President and Cabinet Dr Misheck Sibanda.

He is deputised by chairman of the Public Service Commision Dr Vincent Hungwe.

This comes as President Mnangagwa this week leads a delegation of political parties to Cyclone Idai-ravaged areas in Chipinge and Chimanimani, as Zimbabweans bury their differences in the face of the disaster that killed about 200 people and destroyed infrastructure.

Speaking after a full briefing by the Manicaland provincial Civil Protection Unit on Friday last week, Dr Sibanda said the creation of the taskforce was a follow-up to the decisions made by Cabinet after receiving comprehensive reports by the chairman of the disaster management committee.

Dr Sibanda and members of the taskforce were in Manicaland for two days.

"Some decisions have already been made and will need to be implemented, but we thought it prudent to get familiar with what is on the ground first," he said. "At some point, we will visit Masvingo and Mashonaland East as well."

Dr Sibanda expressed concern at the tight procurement procedures in the country which he said would deter the speedy reconstruction efforts in Chimanimani.

He said he would engage President Mnangagwa to allow for the relaxation of the procurement processes in relation to the disaster.

"One issue that has been constraining the reconstruction programme is the tight procurement procedures," he said. "I will consult with the chairman of Cabinet, His Excellency President Mnangagwa, and be authorised to write to the Procurement Authority of Zimbabwe (PRAZ) after consulting the Secretary for Finance, so that we relax the procedures.

"We want to ensure that we take into account the exigencies of disasters such as the cyclone which we have just witnessed. So that is going to be done next week (this week)."

Dr Sibanda said the taskforce would also hold meetings next week on the way forward after visits to the affected areas.

Speaking at the same event, Dr Hungwe said the taskforce would not take over the duties of the provincial disaster management teams.

"This is intended to ensure the heads of ministries at the centre of the disaster become more effective facilitators of processes that are happening on the ground," he said.

"We are not expected to frustrate processes that are actually happening on the ground. That high-level taskforce is not going to supplant you; it will support the issues and interventions and actions you make."

Dr Hungwe said the taskforce would ensure that the province received all the human skills it required to ensure that the reconstruction of the disaster areas moves smoothly.

Manicaland Minister of State for Provincial Affairs Dr Ellen Gwaradzimba said the teams on the ground were making headway in the search of those that are missing, thanks to sniffer dogs that came from South Africa.

She received a donation of $100 000 from staff in the Office of the President and Cabinet, as well as some clothing items.

The Ministry of Energy and Power Development also handed over a cheque of $100 000 from ZESA Holdings, along with clothing and food items.

He was speaking during a tour of some areas affected by the cyclone in Bikita.

"This week, President Mnangagwa will lead a delegation of representatives of various political parties that are currently engaged in dialogue to go to Chimanimani and have an on the spot assessment of the situation on the ground," said Minister Moyo.

"As Zimbabweans, such problems should unite us as people. Forget about which political party that you are from and join hands with other Zimbabweans to help our countrymen who are in trouble. Those who do not want to work with others we will not force them to do so, but we are happy that there are some who are willing to co-operate."

MDC Alliance leader Mr Nelson Chamisa has refused to be part of the ongoing national dialogue.

"I was happy that some MDC mayors responded to the call for help to the flood victims and, unlike their leader, brought some donations which they had mobilised and we told them to go to the affected families and hand over the donations," said Minister Moyo.

He paid tribute to traditional leaders and the country's uniformed forces, particularly members of the Zimbabwe Defence Forces, for actively assisting the victims.

"Our uniformed forces, especially soldiers, also played a very important role in being the first to access some areas that had been cut off following heavy rains and mudslides," he said. "In Chimanimani, some soldiers walked for 40 kilometres to reach a certain place that had been cut off and they deserve praise for this work."

Minister Moyo paid tribute to the Government and people of Mozambique for their assistance by burying the remains of Zimbabweans who had been swept away by floods across the border.

"Right now we are not in a hurry for the interred bodies in Mozambique to be exhumed though that might be done later on when the situation normalises," he said. "We also have a team of pathologists that will help in the identification of some of the deceased through DNA tests on the remains of recovered unidentified bodies."

In his address, Lands, Agriculture, Water, Climate and Rural Resettlement Minister Perrance Shiri said there was need for all buildings, particularly public ones such as schools, clinics and houses, to undergo certification by building inspectors.

He said prospects of more natural disasters in future owing to climate change called for standard buildings approved by inspectors to minimise damage.