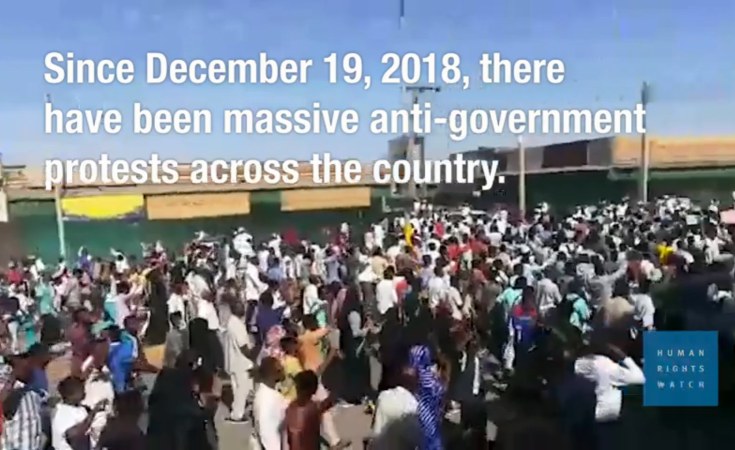 HRW screenshot
Since mid-December, protesters have taken to the streets in towns and cities across the country to protest price increases and to call on President Omar al-Bashir, in power for 29 years, to step down. The protests began in Atbara and have spread to other cities and towns, including Gedarif, Wad Madani, Port Sudan, Dongola, El Obeid, El Fasher, Khartoum, and Omdurman.
Radio Dabanga (Amsterdam)

Abu Hamad — The executive director of the National Mining Union in northern Sudan said that the State of Emergency that has been installed throughout Sudan to curb the organisation of demonstrations has affected the gold production in River Nile state.

Tajelsir Ali Ibrahim, the executive director of the National Mining Union in Abu Hamad in northern Sudan told Sudanese media: "The decrease in gold production in mining areas in the River Nile state is close to 70 per cent."

He cited the ongoing shortage of fuel and liquidity to continue mining operations. Ali Ibrahim added that they were affected by the declaration of the State of Emergency.

The governor of River Nile, El Tayeb El Misbah, acknowledged the existence of a fuel problem in the mining areas. The governor said that it was agreed with gold miners to buy fuel at the commercial price of SDG5,000 ($105) per barrel instead of SDG10,000 on the black market.

Last week traditional miners in Northern State informed this station that the locality imposed annual fees on machinery and deductions on any gold production. They are forced to buy commercial diesel but there is none available in the area, they complained.

Traditional mining accounts for about 80 per cent of Sudan's annual gold production. Recent reports suggest that a large proportion of the gold produced by traditional mining methods in Sudan is being smuggled to neighbouring countries such as Egypt or Eritrea because of poor prices offered by the Central Bank of Sudan (CBoS).