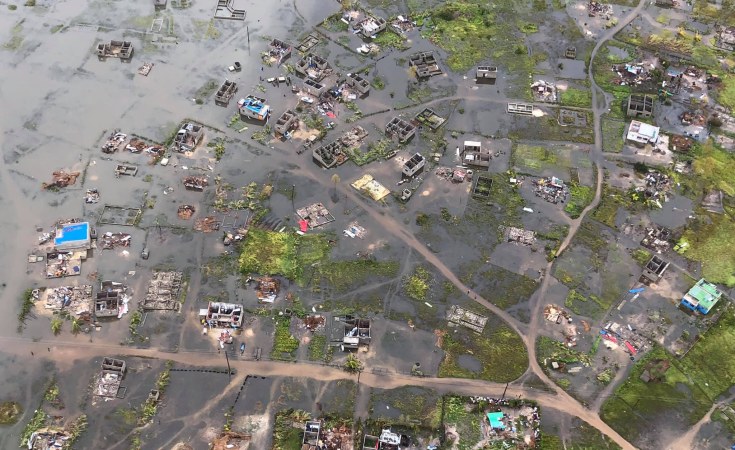 Barcelona — The destruction wrought by Cyclone Idai in southern Africa this month shows weather warnings must spur action and infrastructure has to be built with climate risks in mind if people are to be kept safe on a warming planet, researchers and officials said.

The death toll from the powerful storm packing high winds, which barrelled inland, has risen above 700 across Mozambique, Malawi and Zimbabwe, with nearly 3 million people affected.

The region may also have lost infrastructure worth more than $1 billion in the disaster, including damage to the Mozambican port of Beira, the coastal city where the cyclone came ashore, according to the U.N. Economic Commission for Africa.

Mami Mizutori, head of the U.N. Office for Disaster Risk Reduction (UNISDR), said the devastation in and around Beira - where vast areas were flooded - was "a clear demonstration" of climate change adding to a pre-existing cocktail of risk rooted in poverty, unplanned urbanisation, environmental degradation and weak ability to prepare.

"It is particularly distressing that severe damage has been done to schools, hospitals, health facilities and other key infrastructure as this will have serious consequences for the long-term efforts of these countries to eradicate poverty and hunger," she said in emailed comments.

Scientists are still exploring if and how global warming may have increased the rainfall and storm surge brought by the cyclone, but they have made general observations about how climate change could have worsened the situation.

And in many cases, warmer ocean temperatures fuel more intense rainfall in storms like Idai, with the large amount of rain dumped inland in Malawi, Mozambique and Zimbabwe responsible for many deaths and enormous loss of infrastructure.

Coughlan de Perez and other researchers said forecasts for Cyclone Idai had been accurate and well-disseminated.

What was missing was a detailed understanding of how different areas would be affected, and a joined-up plan to act on the information, they said.

Douglas Parker, professor of meteorology at the University of Leeds, said getting government departments to coordinate their response - something Britain has done to manage flooding emergencies better in recent years - was a tough task.

"Every country in the world faces these challenges. But in countries where the communications or governance of things are not as advanced as they might be... then it can be a greater challenge," he told the Thomson Reuters Foundation.

In Africa, weather extremes tend to be more severe, such as heavier rainfall and fiercer droughts, and people are more vulnerable "so the effects of a breakdown in communication or a lack of action are much more dramatic", he added.

In Mozambique, efforts by local Red Cross volunteers to alert and evacuate people from at-risk communities did help to save lives, said Coughlan de Perez, but there was a limit to what could be achieved at relatively short notice.

"You can't do everything five days before a storm," she told the Thomson Reuters Foundation. "This needs to be coupled with long-term investments - and that is (in) climate change adaptation and that is (in) good development."

UNISDR's Mizutori said that while governments around the world must reduce their greenhouse gas emissions to limit temperature rise, there should be "equal emphasis" on investing in stronger infrastructure for poorer countries that lack the resources to adapt to more extreme weather and rising seas.

"Much more needs to be done in this regard or it will be extremely difficult to achieve the Sustainable Development Goals, many of which depend on a reduction in disaster losses," she added, referring to global targets that include ending poverty and hunger by 2030.

Coughlan de Perez said that when the time came to start rebuilding homes, schools, clinics, roads and other facilities destroyed by Cyclone Idai, factoring in the rising risks of wilder weather would be key.

While she expected aid agencies, authorities and others to have good intentions in that regard, whether there would be enough funding and political momentum to ensure a climate-safe recovery was unclear.

"I think that is where we need to hold ourselves accountable," she added.

Rui Carlos da Maia, director of the disaster risk management unit at the Technical University of Mozambique (UDM), said he feared his country would be slow to learn the lessons of the disaster.

Politicians were poorly educated on the threat climate change poses, while the government lacked the money, equipment, human resources - and will - to build back better, he told the Thomson Reuters Foundation from Maputo.

The city of Beira should never have been constructed in such a flat, flood-prone area, da Maia said, but "from previous experience, they will rebuild in the same places".

Schools and hospitals were unlikely to be made safer as construction contracts often go to the lowest bidder and building codes are not respected, he noted.

In general, understanding of the risks accompanying climate change, and how to address them, was low in Mozambique, he said.

"We have to help African governments embed climate change into public policy," he added.

Cyclone-Ravaged Mozambique Threatened by New Tropical Storm
Tagged:
Copyright © 2019 Thomson Reuters Foundation. All rights reserved. Distributed by AllAfrica Global Media (allAfrica.com). To contact the copyright holder directly for corrections — or for permission to republish or make other authorized use of this material, click here.