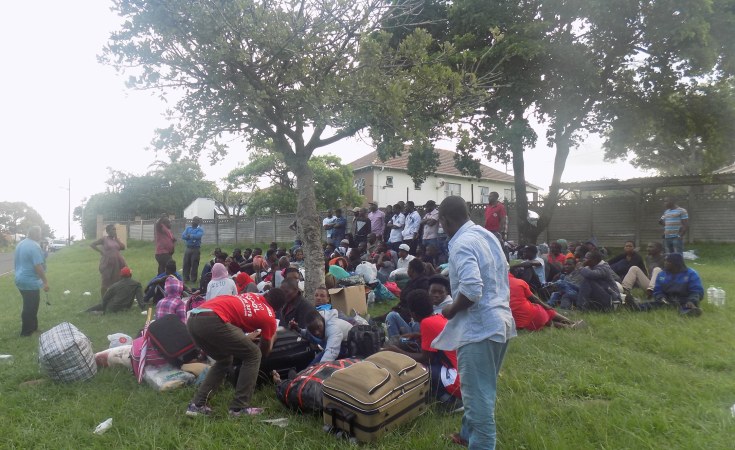 Malawian nationals driven out of their homes in Durban's Burnwood informal settlement last week over theft allegations, wrote a letter of apology on behalf of whoever had wronged the angry locals who rounded on them.

"As a sign of extending an olive branch, the Malawian nationals wrote a letter apologising for those that have committed the act of crime," the statement from the Ethekwini Municipality said on Monday.

"This gesture was overwhelmingly welcomed by the locals who indicated that they were ready to welcome the Malawian nationals back to the community."

This was after a fraught week following accusations that a Malawian national had been found in possession of stolen goods "that belonged to a South African". Over 200 Malawians fled from Burnwood for refuge at police stations and a mosque.

Ethekwini municipality said, however, that the situation over an allegedly stolen item was "hijacked" by a group of locals and criminals.

A meeting was held on Saturday between the community of Burnwood, near Sydenham, eThekwini municipality mayor Zandile Gumede, and the acting Malawian High Commissioner to South Africa Gloria Bamusi.

"...The Municipality is pleased to announce that calm has been restored and majority of Malawians that were forcefully displaced last week have now returned to their homes."

A group of about 105 Malawi nationals have, however, asked to be repatriated. They will be helped by the International Organisation for Immigration and the Malawi High Commission.

Gumede hoped that by Wednesday all the processes would have been concluded.

Bamusi was quoted as saying: "Now that all the issues have been resolved we believe that the community of Burnwood and our people from Malawi will now live in a peaceful co-existence."

Bamusi thanked the local and national government for the assistance rendered and to the community policing forum, NGOs and the Islamic society who came to the rescue.

Municipal spokesperson Simphiwe Dlamini said it was a small minority which rounded on the Malawians.

At the same time, many locals locked up their belongings for them until the situation was resolved.

The original complaint of theft was resolved with an agreement for compensation.