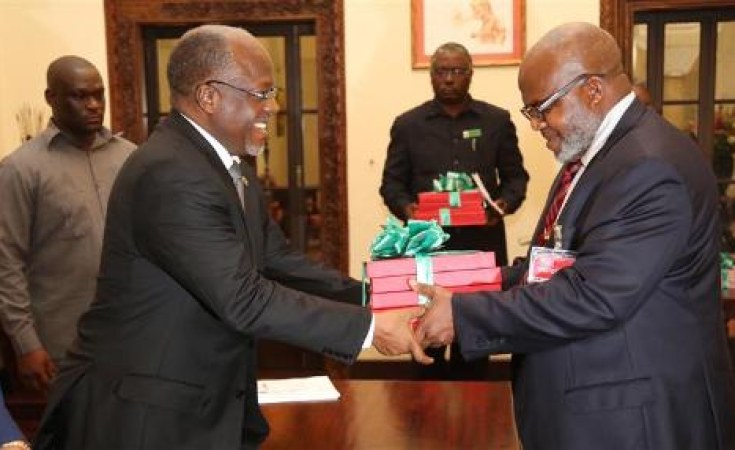 Dodoma — The tabling of the 2017/18 audit report by the Controller and Auditor General (CAG) in Parliament is now in jeopardy after the legislative body resolved in an unprecedented move to stop working with the current head of the National Audit Office, Prof Mussa Assad.

According to Article 143 (4) of the Constitution, the CAG is obliged to submit his audit reports to the President, who then is required to direct its forwarding to Parliament in seven days during the first sitting of the National Assembly for the period.

Yesterday's decision put to question whether the report will be received by Parliament and if it will be tabled by the CAG as has been the case in the past. Usually, the CAG delivered the report to the august House before the traditional press conference to unvail the findings to the media, followed by several days of debate on the report by MPs.

The ruling-party-dominated-Parliament earlier in the morning endorsed a motion by the Parliamentary Privileges, Ethics and Powers Committee that it stops working with Prof Assad whom they convicted of "disrespecting" the Parliament. The report was adopted despite the opposition MPs' plea to reject it. Leader of Opposition Freeman Mbowe led the opposition legislators in a walk-out as the vote was passed.

The vote also raised a frenzy on social media as netizens jumped on the opportunity to largely castigate the ruling party MPs and defend Prof Assad. A twitter hashtag #IstandWithCAG was trending last evening.

Prof Assad was in January interrogated by the committee over remarks he made regarding the competence of the House to respond to audit queries. Asked whether the resolution meant that they will not debate the 2017/18 audit report, Speaker of Parliament, Mr Job Ndugai, told The Citizen:

"We will not work with that person (Prof Assad), that's all. The rest on its implications rests on your interpretation. You, as a journalist, are free to connect the dots."

The bone of contention between the Speaker and the CAG started last year when Prof Assad said in an interview with the UN Kiswahili Service that his institution prepares audit reports which Parliament should work on.

"If we are producing reports and no action is taken, that is a weakness of the Parliament. I believe it is a challenge that should be worked on... Parliament is failing to exercise its responsibility effectively," Prof Assad said.

It was these remarks that angered Mr Ndugai who summoned the CAG to be grilled by the committee, and at one point threatened to have him handcuffed should he fail to appear for questioning.

Prof Assad honoured the summons and appeared before the committee, chaired by Mr Emmanuel Mwakasaka, on January 21, the outcome of which was made public yesterday (Read related story on page 2).

Lawmakers agreed with this resolution, it would be difficult for the CAG's 2017/18 audit report to be tabled in Parliament.

"I think it will be difficult to work on the report which has been signed by Prof Assad," said Mr Daimu Mpakate (Tunduru South - CCM).

Mtwara Special Seats MP Tunza Malapo (Chadema) said: "This creates darkness. I don't know what decision would be made about the CAG report... I never thought that the matter of calling the Parliament 'weak', would bring panic among MPs."

"The CAG acts as a bridge between the Parliament and the government. If that bridge disappears it would be hard for us to fulfill our duties," said Ms Komba.

Previous Story
Analysts Weigh in On Cag-Bunge Rift
Next Story

Analysts Weigh in On Cag-Bunge Rift