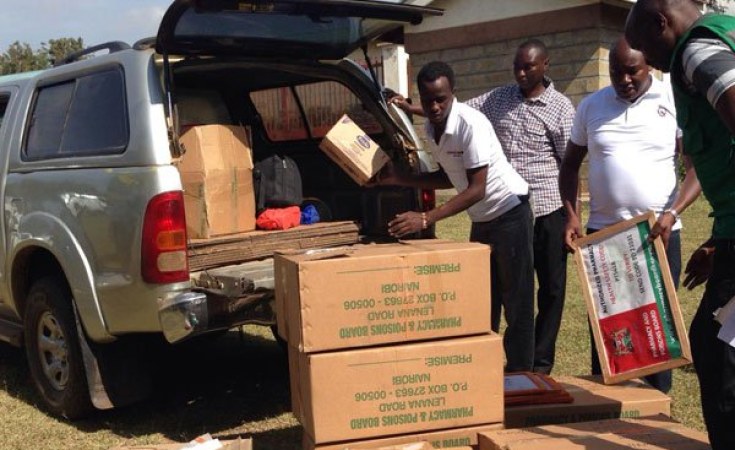 Victor Otieno/Daily Nation
Pharmacy and Poisons Board officials load cartons of counterfeit drugs seized during a crackdown in Nyanza into a vehicle in Kisumu on February 22, 2019.
The Nation (Nairobi)
By Shaban Makokha

The Pharmacy and Poisons Board (PPB) has shut down 86 pharmacies Kakamega, Vihiga, Bungoma and Busia counties over illegal operations.

Dr Dominic Kariuki, the board's officer in charge of surveillance, inspections, enforcement and ports of entry, reported this on Thursday, saying 39 people were arrested - 20 in Kakamega, 10 in Bungoma, seven in Vihiga and two in Busia.

Dr Kariuki said the board also seized poor quality drugs worth millions of shillings from the outlets in the crackdown that kicked off on Monday.

PPB inspectors also confiscated drugs supplied by the government that were being sold to the public.

"Government drugs were found in three private pharmacies in Kakamega County. Those operators were arrested and the chemists closed," he said.

He added that the operators of Amanda, Murhanda and Lugosh chemists in Kakamega town were arraigned.

Those found operating illegal pharmacies were charged with, among others, possession of part 1 poisons and carrying on the business of a pharmacist while not registered and at premises that are not registered.

Mr Kariuki said they were concerned about the absence of superintendents at licensed pharmacies, which he said were left in the hands of unqualified people, putting Kenyans' lives in danger.

"We have summoned professionals who have been found engaging in the malpractices for disciplinary action by the board's disciplinary committee," he said.

The PPB has introduced the use of closure notices (banners) with unique serial numbers that are displayed on the doors of affected chemists.

"We have handed copies of the closure forms to local police to ensure the premises are not opened without permission of the board," Dr Kariuki said.

"The notices acts as a warning to members of the public to keep off such chemists," he also said, and advised to use of the safety codes displayed in registered chemists to verify their legality.

PPB inspectors, who addressed journalists at Golf Hotel in Kakamega town, asked pharmacies with expired drugs to isolate them and get in touch with the board's regional inspectors for safe disposal.

Dr Kariuki also said the board had distributed minilabs to regional officers for random sampling and testing of medicines to ensure they are of good quality.

He added: "We have trained health workers and other stakeholders on how to identify poor quality drugs and use the PPB's reporting tools."