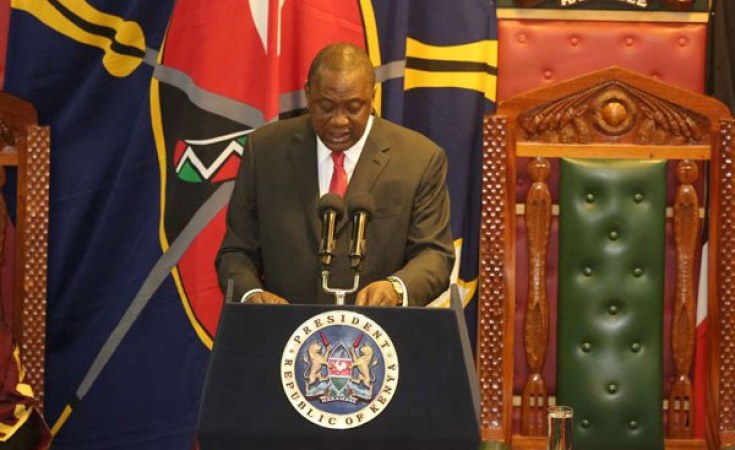 Nairobi — President Uhuru Kenyatta has cautioned Kenyans against what he terms as a "vigilante justice" in the war against graft saying the rule of law must be followed in pursuit for justice.

While expressing his confidence in the investigating agencies and rooting for their support, the President urged them to fight economic crimes but must do so based on evidence and facts.

Speaking during the State of the Nation Address on Thursday, the President noted that he was under immense pressure to fire corrupt Government officials but said no one will be condemned before being heard.

"I must say that I have been under pressure... that who am I sacking," he said, adding that, "I must, however, caution that the pursuit of the corrupt will be undertaken strictly within the remits of the law - and not through vigilante justice and pitchfork protest. Though media narratives rally our resolve as they should, our actions will not be based on condemnation before one has been heard."

"The cornerstone of our democracy is the rule of law, and the principle of due process is a critical anchor."

He insisted that Kenya, "must aspire abidingly to this ideal and ensure that we do not pursue justice in one area through injustice in another. I remain confident in our investigative and prosecutorial institutions to diligently deliver justice on the strength of the evidence and in fidelity to the law."

The President however warned officials whose graft cases will get to court, that they will be removed from their respective positions.

"As I have I done before, I undertake to act and remove from the government any individual who will have a case to answer before a court," he asserted.

His sentiments were supported by former Prime Minister Raila Odinga, who said the rule of law must be followed in the war against graft but insisted that such cases must be expedited.

"The frustration with the people of Kenya is the time that is taken to investigate. There must be an end for investigations and prosecution," he said.

"We need to move with speed and ensure that the people who are continuing to loot the wealth of this country, face the law. The sooner, the better."

On his part, the President urged the Judiciary to deal with graft cases as a matter of priority, to ensure justice is delivered.

"But I must once again make it clear we must work together - the Executive, the Judiciary, the Parliament and the Citizens, if we are to deal effectively with the challenges standing in our way and, in particular, the fight against the corruption jigger. I count on all Kenyans in this struggle," the President said.

He added that "There will be no turning back in the War against Corruption and Impunity. There will be no sacred cows, no compromise. The fight against corruption is a fight for the soul of our nation."

The war on graft has caused major rifts among politicians, with some accusing investigating authorities of being biased and targeting a certain community.

Among the major graft cases include the multi-billion shillings Kimwarer and Arror dams scandals, that have stirred emotions and risked dividing the ruling party Jubilee.

Deputy President William Ruto has found himself on the receiving end, in his attempt to defend the Government from the graft accusations.

-What was in the President's speech-

That Kenyans were fatigued by empty rhetoric, was evident days before Thursday, when President Uhuru Kenyatta made the State of the Nation address.

Some even coined fake breaking news alerts stating what the President would tell Kenyans.

And as expected, the President said he was aware of this and started by saying "I have heard your cries. I will not disappoint you."

The hope of a nation weighed on his shoulders as he assumed the podium at the National Assembly, to face a 45 million populace, who only want a better Kenya, free of graft amid waning optimism.

The President's speech had the slogan "no turning back" to assert his commitment in eliminating some of the perennial challenges facing the country that range from an affordable quality health sector, food security, security and the elephant in the room- corruption.

According to the President "the State of the Nation is strong."

The President spoke at length on the need for the country to remain united while taking a cue from his move together with former Prime Minister Raila Odinga to settle their differences and agreeing to work together.

Govt to Fulfil Dream of Affordable Homes - From Kenyans’ Wages
Tagged:
Copyright © 2019 Capital FM. All rights reserved. Distributed by AllAfrica Global Media (allAfrica.com). To contact the copyright holder directly for corrections — or for permission to republish or make other authorized use of this material, click here.