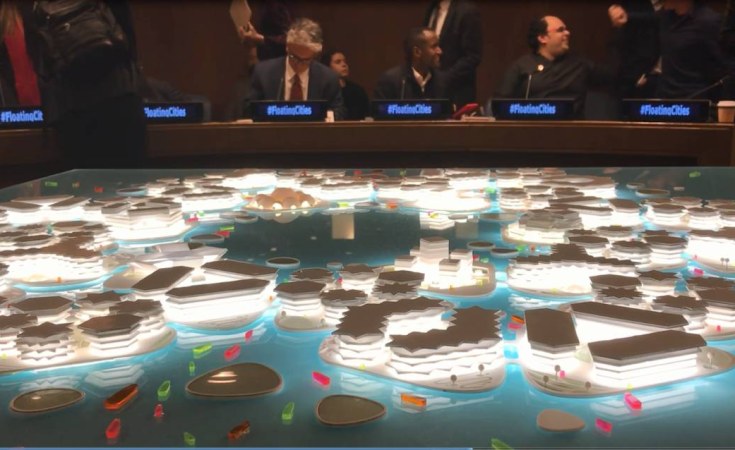 A U.N.-backed partnership will study the futuristic prospect of floating cities, looking at how platforms at sea might help bail out coastal cities at risk of flooding due to climate change.

With 90 percent of the world's largest cities vulnerable to inundation as glaciers melt and seas rise on a warming planet, modular platforms anchored to the sea floor could be connected in a ring to house communities atop the oceans, members said.

UN-Habitat, which works on sustainable urban development, will team up with private firm Oceanix, the Massachusetts Institute of Technology and The Explorers Club, a professional society, to advance the concept, the coalition announced Wednesday.

The partnership plans to build within months a prototype open to the public, which it hopes to dock on the East River next to U.N. headquarters.

Compared with another located in Copenhagen, the New York City version aims to grow its own food and meet its water and energy needs, said U.S. company Oceanix, which will build it.

The vision for floating cities has raised questions over whether they could divert attention from dealing with the root causes of climate change, which by boosting sea levels threatens low-lying coastal communities with storm surges and flooding.

Some have also warned the cities may end up being only for the ultra-rich - such as floating villas currently being sold off the coast of Dubai - a risk the new project aims to address by exploring sea-borne homes for the neediest too.

The concept has prompted cutting-edge research in water management, ocean engineering and farming that could produce floating cities which are self-sufficient and safe from extreme weather like storms, a discussion at the United Nations heard.

Should global average temperatures increase 1.5 degrees Celsius (2.7F) from pre-industrial times, sea levels could rise as much as 77 centimeters (30.3 inches) by 2100, according to the Intergovernmental Panel on Climate Change (IPCC).

The lower 1.5C limit enshrined in the Paris Agreement is likely to be breached between 2030 and 2052 if global warming continues at its current pace and unprecedented measures are not taken to stem the increase, a 2018 IPCC report said.

Nobel Prize-winning economist Joseph Stiglitz told the Thomson Reuters Foundation that much of the technology emerging from research on floating cities could also be used to improve existing cities on solid ground.

"The benefits are not just going to be what you will be doing on water, but on land," he said.