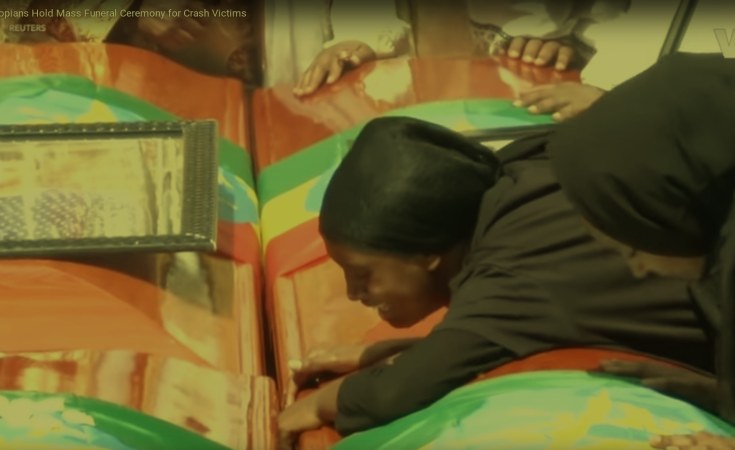 Screenshot VOA
The funeral that was held for Ethiopian victims of the airline tragedy.
This is Africa (Hilversum)
By Socrates Mbamalu

After first blaming the pilot of Ethiopian Airlines flight ET302, Boeing has publicly accepted responsibility for the error that caused the crash.

When the Boeing 737 Max 8 crashed on 10 March 2019 near Addis Ababa, killing everyone on board, blame was ascribed to Ethiopian Airlines. Later on, the blame was shifted to the pilots who flew that particular plane, with many Western media outfits focusing on the number of hours the co-pilot had under his belt.

What this was is a fight for protecting the brand of Boeing and tarnishing the brand of Ethiopian Airlines. Boeing and Western media tried to portray Captain Yared Getachew and his co-pilot, Ahmednur Mohammed as incompetent and not properly trained. The New York Times, Reuters and The Washington Post all cited an anonymous source who said that Captain Getachew had not trained on the 737 Max simulator despite Ethiopian Airlines having had that simulator since January 2019.

In the wake of the recent admittance that Boeing was indeed at fault, the slander against Ethiopian Airlines, its capable pilots and crew brings into question why Western media was so quick to shift blame.

Boeing's public insistence immediately after the disaster that its planes were safe did not sit well. Many lives were lost - the lives of intellectuals, entrepreneurs, doctors, PhD graduates, whole families - leaving a trail of pain as their deaths shook a continent.

A full 26 days later, Boeing's CEO Dennis Muilenburg has offered an overdue apology, which has sparked renewed anger against the company. He said, "We at Boeing are sorry for the lives lost in the recent 737 Max accidents. These tragedies continue to weigh heavily on our hearts and minds, and we extend our sympathies to the loved ones of the passengers, the crew on board Lion Air flight 610 and Ethiopian Airlines Flight 302. All of us feel the immense gravity of these events across our company and recognise the devastation to the families and friends of the loved ones who perished."

Muilenburg went on to explain the cause of the accidents in both flights: "It is apparent that in both flights, the maneuvering characteristics augmentation system, known as MCAS, activated in response to erroneous angle-of-attack information. As pilots have told us, the erroneous activation of the MCAS function can add to what is already a high-workload environment. It is our responsibility to eliminate this risk."

The question that has been raised - and it also stems from prior investigations - is why Boeing sold certain fundamental safety features needed by pilots in the cockpit as "extras"? The New York Times, among others, have reported that the practice of selling fundamental features like communication, navigation or safety systems as "add-ons" is rife in the airline industry. The reason, it seems, is that this practice brings down the cost of the aircraft. Experts say that these "extra" features might have helped the pilots involved in the Ethiopia Airlines and Lion Air crashes to detect erroneous readings and prevent the planes from going down. Clearly, Boeing believed that making money was more important than safeguarding lives.

Boeing May Have Sold Unsafe Plane to Ethiopian Airlines - Lawyers
Tagged:
Copyright © 2019 This is Africa. All rights reserved. Distributed by AllAfrica Global Media (allAfrica.com). To contact the copyright holder directly for corrections — or for permission to republish or make other authorized use of this material, click here.