East Africa: Why People Starve Despite Being Surrounded By Stockpiles of Food

An estimated 23 million people in Kenya, Somalia, Ethiopia and South Sudan do not have enough to eat.

A report released last week by the Climate Prediction and Applications Centre, a department of Inter-Governmental Authority on Development, shows that Ethiopia's southern Rift Valley lakes and surrounding regions, the semi-arid areas of Kenya, Uganda's Karamoja, and northern and eastern Somalia experienced low rainfall in the last season and its residents are at the risk of starvation.

A majority are being sustained by food aid.

In these areas, drought and higher-than-usual temperatures are also affecting forage and water availability for the people, livestock and wildlife.

"Poor October-to-December rains, followed by abnormally high temperatures since January 2019, are leading to rapid deterioration of pastoral resources and have started affecting livelihoods. Dry conditions are persisting into March 2019.

"The tropical cyclone observed across the coast of Mozambique during the first and second weeks of March partially contributed to the current dry conditions," said the report released on March 22.

Death in the dustbowl of the north

While the tropical cyclone has mostly affected the southern African states of Mozambique, Zimbabwe and Malawi, experts say the effects will be felt all the way to East Africa, where the start of long rains has been delayed to the end of March.

The dry conditions have a high likelihood of affecting maize, bananas and sorghum production in Uganda, one of the main food suppliers in the region.

The Integrated Food Security Phase Classification, a tool for food security analysis and decision-making, also cited Karamoja in Uganda, northern and central Somalia and most of South Sudan as East African regions at the highest risk in terms of food security.

In most parts of the Horn, the October to December rains were 55 per cent less than normal.

In northern Kenya, about 900,000 people thousands and livestock at risk of starvation as the dry season persists into the end of March.

The Kenya Food Security Outlook report released by Relief Web in mid-March puts maize production in the marginal agricultural areas at 55 per cent to 65 per cent below the five-year average.

But experts have said that the problem with Kenya is not lack of food but poor government intervention.

"Reports of severe hunger amid plenty highlight the fact that there is co-ordination failure in government," said Timothy Njagi Njeru, a research fellow at the Tegemeo Institute of Kenya's Egerton University.

"The government's failure to co-ordinate the efforts of various actors at both the national and county levels is what has led to this situation," Mr Njeru added.

In Uganda, the World Food Programme has reported that a majority of the households in Karamoja and those in refugee-hosting districts are hungry.

As a result, the WFP has been providing fortified maize to households with young children, pregnant and breastfeeding women, for the prevention of malnutrition.

But the UN body suspended the distribution, after at least 250 people got sick and three died allegedly poisoned by the maize imported from Europe

In Somalia, more than two million people have been reported to face acute levels of food shortage and are in urgent need of humanitarian support, as so the residents of Ethiopia's Dire Dawa and Tigray regions.

Fewsnet, the Famine Early Warning Systems Network, a leading provider of information and analysis on food insecurity, said that most of northern and central regions of Somalia will remain food-stressed in the absence of food assistance.

Experts, however, say that eastern Africa cannot be described as experiencing famine.

International NGO Oxfam defines famine as a situation where one in five households experience extreme lack of food, and where starvation, destitution and death are evident.

But Dr Mahari Taddeke Maru, an expert at the Igad, warned that without proactive management of the current situation in the region, the food crisis could escalate into a famine.

Beatrice Byarugaba, Uganda's acting Director of Agricultural Extension Services, said that most of the country has a food glut due to a bumper harvest from the last season, which cannot be sold due to disruptions in the East African market.

She cited Rwanda's partial closure of its border with Uganda late February, Kenya's reduced purchase of maize and beans from Uganda and Tanzania's rice exports for causing a food glut and a resultant reduction in prices, which affects farmers' incomes.

Dr Mahari said that opening up the borders would also help pastoralists better manage climate related challenges, adding that pastoralism has since time immemorial been used to combat the drought: Herders move to places with water and pasture, allowing households to keep their livestock healthy. Households can sell their healthy livestock and buy food.

Dr Walter Kaelin, a former special advisor to the United Nations Secretary General on the human rights of internally displaced persons, said that opening up borders and allowing free movement of persons makes it possible of people to go out of their countries, work and send home cash for food.

"When there is a drought in parts of the Ecowas (the Economic Community for West African States), people travel to neighbouring countries, find work and send back cash remittances. In that sense, people help themselves and are part of the solution," he said.

According to the 2018 Africa Regional Overview of Food Security and Nutrition, published by the UN Economic Commission for Africa and the Food and Agriculture Organisation in February 2019, remittances are an important livelihood source for rural communities that largely depend on agriculture.

"Remittances from migrants play an important role in reducing poverty and hunger as well as stimulating productive investments," says the report.

As drought ravages parts of the continent, Africa is not on track to meet Sustainable Development Goal 2: To end hunger, achieve food security and improved nutrition and promote sustainable agriculture by 2030.

The 2018 Africa Regional Overview of Food Security and Nutrition report says that the prevalence of undernourishment continues to rise and now affects almost a quarter of the continent's population.

"In sub-Saharan Africa, the upward trend appears to be accelerating, and now 23 per cent of the population is undernourished," says the report.

But the authors of the report hope that the implementation of the African single market will lead to improved nourishment on the continent, as intra-African agricultural exports are expected to raise.

The report shows that intra-African agricultural exports rose from $2 billion in 2000 $13.7 billion in 2013, and they remain relatively modest and often informal.

In the East African Community, the Sectoral Council on Agriculture and Food Security met last December and agreed that all partner states have strategic national food reserves.

To achieve regional food security, the Council also instructed the EAC Secretariat to develop a harmonised regional harvesting calendar for staple crops such as wheat, sugarcane, maize, rice, cassava and sorghum as a monitoring tool for food security.

Meanwhile, meteorological departments have forecast a rainfall deficit during April, with drier-than-usual conditions in western Kenya, Turkana, southern and southeastern Ethiopia, central and northeastern Somalia, the coasts of Tanzania and Kenya, and much of Uganda and South Sudan.

Fewsnet also predicts crop failures of up to 30 per cent in the coming months. 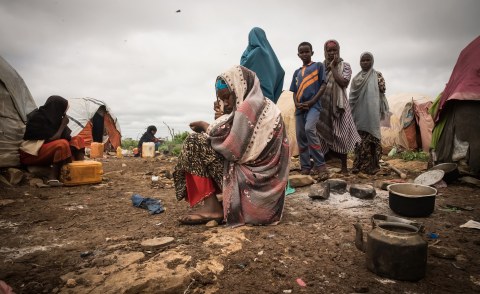 East Africa on Alert as Drought Tightens Grip
Tagged:
Copyright © 2019 The East African. All rights reserved. Distributed by AllAfrica Global Media (allAfrica.com). To contact the copyright holder directly for corrections — or for permission to republish or make other authorized use of this material, click here.