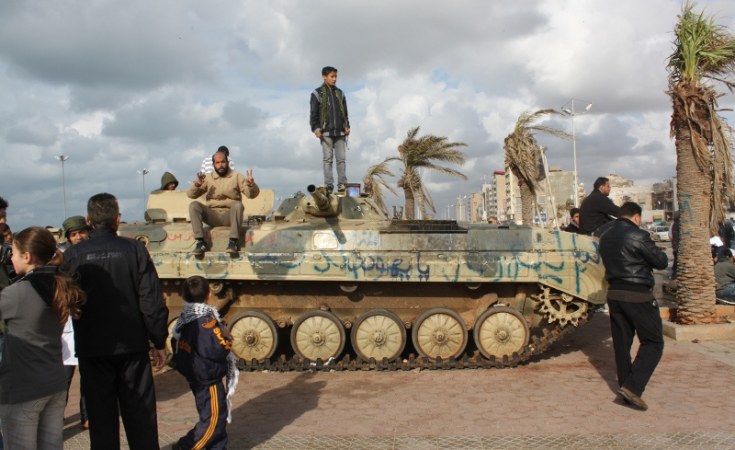 Tunis — All forces taking part in fighting around Libya's capital, Tripoli, should take all necessary action to minimize civilian harm and abide by the laws of war, Human Rights Watch said today. Armed groups loyal to both sides have a record of abusing civilians.

Fighters led by General Khalifa Hiftar, known as the Libyan National Army (LNA), have a well-documented record of indiscriminate attacks on civilians, summary executions of captured fighters, and arbitrary detention. Militias affiliated with the United Nations-backed Government of National Accord (GNA) and based in western Libya also have a record of abuses against civilians.

"Whenever rival armed forces clash in Libyan cities, it's civilians who suffer the most," said Sarah Leah Whitson, Middle East and North Africa director at Human Rights Watch. "All sides need to abide by the laws of war and minimize civilian harm."

On April 4, 2019, LNA forces advanced to within 30 to 40 kilometers of Tripoli in a move to take the capital, according to news reports, after strengthening Hiftar's influence in southern Libya. The western part of the country, including Tripoli, remains dominated by the GNA or militias affiliated with it.

These developments occurred as UN Secretary-General António Guterres was in the capital ahead of a UN-led conference, planned for April 14 through 16 in the city of Ghadames, to reconcile Libyan rivals and chart a course toward elections.

Since the outbreak of conflict in 2014, Libya has had first three, then two, rival governments claiming legitimacy - the GNA in Tripoli, and the "Interim Government" based in the eastern cities of al-Bayda and Tobruk that is allied with Hiftar.

Hiftar has reportedly ordered LNA forces not to target civilians in Tripoli. However, fighters under his command have been implicated in serious abuses against civilians elsewhere in the country, including preventing civilians from leaving areas under siege, looting and burning homes, and carrying out summary executions. Hiftar is not known to have held any LNA forces accountable for war crimes or human rights abuses.

The International Criminal Court (ICC), which has jurisdiction over Libya, has issued an arrest warrant for only one person for crimes committed since the ouster of the Libyan strongman Muammar Gaddafi in 2011: LNA special forces commander Mahmoud al-Warfalli, whose current whereabouts and activities are unknown.

The court issued the warrant on August 15, 2017 for murder, for al-Warfalli's alleged role in the killing of 33 people in seven incidents in and around Benghazi between June 2016 and July 2017. On July 4, 2018, the ICC issued a second warrant for al-Warfalli for his alleged involvement in another incident. He should be immediately surrendered to the ICC.

Under the laws of war, which apply to internal armed conflicts like the one in Libya, warring parties must direct attacks only at military targets. Deliberate, indiscriminate, or disproportionate attacks against civilians and civilian structures are prohibited. Warring parties must "take all feasible precautions" to avoid or minimize harm to civilians and damage to civilian structures.

The laws of war require treating detained civilians and captured fighters humanely. Commanders and prison authorities should communicate clearly to forces under their command that torture and other ill-treatment are prohibited. Anyone taken into custody should be informed of the specific basis for their detention and be able to contest their detention before an impartial authority. Detaining authorities should keep a registry of the names of fighters and civilians known to have been killed or detained as a result of the hostilities, and make the information available to the next of kin.

Serious violations of the laws of war, when committed with criminal intent, are war crimes. Those who commit, order, assist, or have command responsibility for war crimes are subject to prosecution by domestic courts or the ICC.

The ICC has jurisdiction over war crimes, crimes against humanity, and genocide committed in Libya since February 15, 2011, under UN Security Council Resolution 1970. The ICC prosecutor has in the past warned that her office "will not hesitate to investigate and prosecute those who commit crimes under the Court's jurisdiction in Libya irrespective of their official status or affiliation."

Airstrike Closes Tripoli Airport as Battle for Capital Rages
Tagged:
Copyright © 2019 Human Rights Watch. All rights reserved. Distributed by AllAfrica Global Media (allAfrica.com). To contact the copyright holder directly for corrections — or for permission to republish or make other authorized use of this material, click here.