Nigeria: Adeleke is Qualified to Be Governor, Says Appeal Court 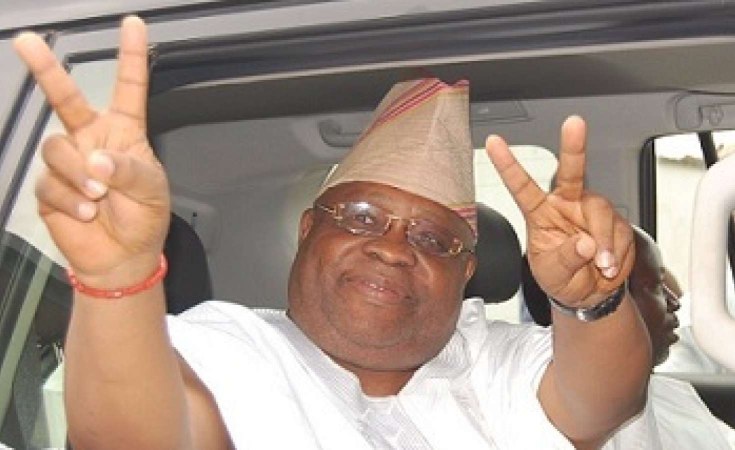 The Akure Division of the Court of Appeal Saturday affirmed the qualification and eligibility of Osun State's governorship candidate of the Peoples Democratic Party (PDP), Senator Ademola Adeleke, to seek election as governor.

Presided over by Justice M.A Danjuma, the court dismissed the appeal against the judgment of an Osun State High Court sitting in Oshogbo which had confirmed the eligibility of Adeleke to contest for the governorship of Osun State.

The court had Justices R.A Abdullahi and P.A Mahmoud as members of the panel.

But the Peoples Democratic Party (PDP), in reacting to the judgment, said it has castrated the judgment of the High Court, Abuja, because it had nothing to stand on.

The Osogbo High Court had ruled that Adeleke was qualified to contest for the governorship having been educated up to secondary school level.

Not satisfied with the high court decision, the runner up in the gubernatorial primary election, Dr. Akin Ogunbiyi proceeded to the appellate court to challenge it.

The appeal court agreed with Adeleke and consequently dismissed the appeal on three grounds.

It held that the trial court had no jurisdiction to entertain the suit and that the sponsored petitioner, one Kingsley Awosiyan from Ife Central had no locus standi to file the case.

The court also held that the matter was brought to court outside the stipulated 14 days after the conduct of the primary election.

The Osun State Governorship Election Tribunal had in a spilt judgment declared Adeleke winner of the governorship election.

Reacting to the judgment, the PDP said the decision was gratifying because the case had no substance.

The PDP reaction was signed by the party's Director of Publicity for South-west Zone, Ayo Fadaka.

The statement read: "We take due cognisance of the victory of Senator Ademola Adeleke at the Court of Appeal, Akure on issues concerning his qualification to contest the gubernatorial elections.

"It is gratifying to note that the matter was resolved in his favour, particularly as there is no substance to this red herring accentuated and sustained by the APC for such a long time. This judgment has most fortunately castrated the curious verdict of the FCT High Court, Bwari.

"While we await hopefully the removal of all roadblocks that the APC has installed to forestall the inauguration of Adeleke as Governor of Osun State, we express our confidence in the Judiciary to do the needful in ensuring that justice and fair play continue to remain as the threshold upon which our democracy is built", PDP said.

However, while the tribunal judgment is pending on appeal, a High Court of the Federal Capital Territory, Bwari, Abuja, nullified his candidature for the election.

The trial judge, Justice Othman Musa held that Adeleke was not qualified to run for the office of a governor for allegedly not being educated up to secondary school level as required by Section 177 of the Nigerian Constitution.

Reacting to the judgment, Adeleke gave four reasons why he believed the judgment of the High Court of the Federal Capital Territory, Bwari, Abuja, nullifying his candidature for the September 2018 governorship election in Osun State, would not stand on appeal.

In a statement titled, 'Flawed Bwari judgment against Senator Adeleke cannot stand', issued on his behalf in the name of his campaign organisation, and signed by a lawyer, Niyi Owolade, Adeleke said: "While we are set to appeal the judgment, we also find it compelling to put the records straight by listing out the fatal flaws in the ruling and why it cannot stand before any court."

According to him, the judge ignored critical evidence to rule against validated facts and submissions.

First, Adeleke said there had been "two rulings delivered in September 2018" which "held that Senator Adeleke satisfied all requirements of the law to contest for office."

He stated that the Tuesday judgment breached the "precept" that "once a court of coordinate jurisdiction has ruled on a matter, court of similar jurisdiction cannot entertain it."

The statement added that the judge "erred in law by failing to take note of the expiration of 180 days for ruling on pre-election matters" adding that "Even when a December 2018 judgment with respect to the issue was presented, the judge chose to ignore it. We note that the judge violated the law by adjudicating over a matter whose filing and hearing period had expired.

Adeleke's third reason for faulting the judgment was that the judgment ignored the evidence produced by the West Africa Examination Council, which listed "all students who sat for the May/June examination in 1981 alongside the senator, in addition to the certified true copies of his school certificate result.

"From the evidence produced by the Council, it is crystal clear that Senator Ademola Adeleke was, indeed, educated beyond the minimum requirement of 'up to secondary school level' as stipulated by law and therefore qualified to run for the office of governor in accordance with Section 177 (D) of 1999 CFRN (as amended). Notwithstanding, the judge still went ahead to rule otherwise.

"The only statutory body empowered by law to determine authenticity of a secondary school results is the West African Examination Council and they confirmed the authenticity of Senator Adeleke's result by producing the CTC of the same result. What evidence did the judge therefore base his ruling on?"

Lastly, Adeleke said, the judge was wrong to conclude that he forged the senior secondary school statement of result, which he submitted to the Independent National Electoral Commission.

He explained that having been shocked by the evidence produced by WAEC showing that he sat for the May/June 1981 examinations, the plaintiffs, again, went on to have the principal of the school to appear in court to confirm the authenticity of the statement of results.

He said the school "owned up to the error, which was not about forgery", and that "From the foregoing, we affirm that the judgment of the Bwari court is a travesty of justice, a purchased ruling designed to negatively affect the outcome of Osun governorship judicial process. We declare unequivocally that the ruling, being so glaringly against tested facts and the law, cannot stand.

"It is also clear that the ruling cannot, in any way, stop the reality that Senator Ademola Adeleke fulfilled constitutional requirements to be Governor of Osun State. We appeal to our numerous supporters and good people of Osun State to remain calm. This is another failed bid in the efforts of detractors and enemies of democracy."

Is Senator Adeleke's Arrest a Plot By Nigeria Ruling Party?
Tagged:
Copyright © 2019 This Day. All rights reserved. Distributed by AllAfrica Global Media (allAfrica.com). To contact the copyright holder directly for corrections — or for permission to republish or make other authorized use of this material, click here.