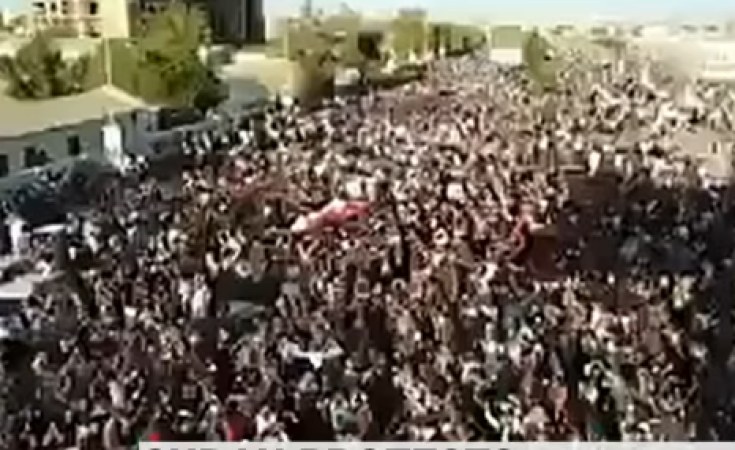 Sudan's President Omar al-Bashir has rejected calls to step down amid growing popular pressure against his rule. For thousands of protesters, the military may be the only option to force him out of office.

Thousands of Sudanese protesters on Sunday rallied outside the army's headquarters in the capital Khartoum for a second day, calling on the military to back their demand for President Omar al-Bashir to step down. The complex also houses the Defense Ministry and the official residence of Bashir, whose nearly 30-year-rule the protesters are determined to end.

"Sudan is rising, the army is rising," protesters chanted. Some demonstrators lobbed stones at security forces, who used tear gas, live rounds and batons in repeated attempts to drive the crowd away from the area.

Security forces killed at least five protesters during the weekend, including one medic, opposition representatives said on Sunday.

State officials say 32 people have died since protests erupted in the east African country after a government decision to triple the price of bread. Human Rights Watch, however, has put the death toll at 51, including medics and children.

The EU voiced concern at Khartoum's response to the protests. "The people of Sudan have shown remarkable resilience in the face of extraordinary obstacles over many years," the EU's foreign affairs arm said. "Their trust must be won through concrete action by the government."

Protest organizers chose April 6 to begin the rally outside the army headquarters, the most heavily-guarded compound in the country, to mark the 1985 uprising that toppled the regime of President Jaafar Nimeiri.

"After what we did yesterday, we will not leave this area now until our mission is accomplished," protester Osama Ahmed, who spent the night outside the compound, told French news agency AFP. "We won't leave this area until he steps down."

On Saturday, police and security forces blocked all bridges leading to Khartoum center across the River Nile, in an apparent attempt to limit the number of protesters. The bridges remained closed on Sunday, causing major traffic jams.

United Nations Secretary-General Antonio Guterres in December called on Sudanese authorities to investigate deaths during violent protests across the country.

Thousands Keep Up Protests At Army Headquarters for Second Day

Sit-In Protest Outside Khartoum Army Headquarters Continues
Tagged:
Copyright © 2019 Deutsche Welle. All rights reserved. Distributed by AllAfrica Global Media (allAfrica.com). To contact the copyright holder directly for corrections — or for permission to republish or make other authorized use of this material, click here.