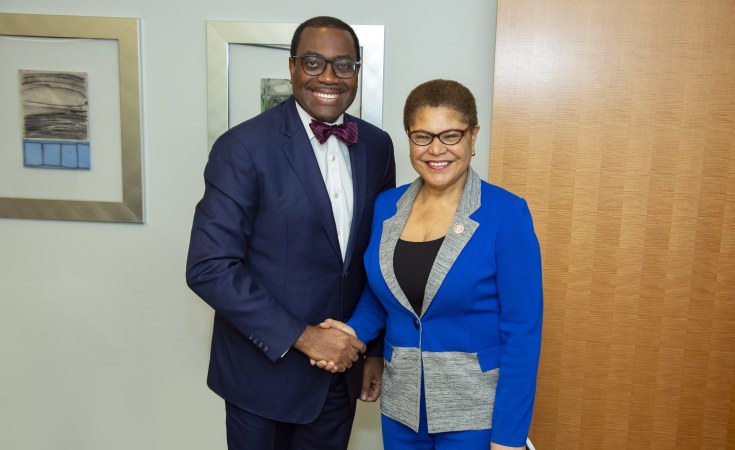 Dr. Adesina and a delegation of senior Bank officials, are expected to meet with US Congresswoman Karen Bass, who serves on the House Committee on Foreign Affairs where she is a Ranking Member of the Subcommittee on Africa, Global Health, Global Huma Rights and International Organisations. The meeting will be attended by other US government officials and investors.

Dr. Adesina took over as chairman of all MDBs in Davos earlier this year. 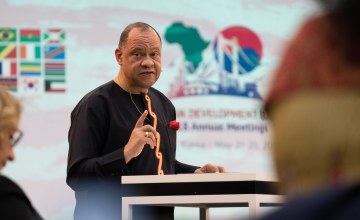 At the end of the African Development Bank's annual meetings held in Busan, Korea, the Bank's Board of Governors saw the Bank's increase in disbursements in 2017--the highest in the Bank's history--and its increased revenue as indication that the Bank was making good on its promise of leading the way in Africa's developmental transformation as well as making inroads on its High 5 priorities. As a result, the governors authorized the opening of consultations with a view to a general increase in the Bank's capital. One of the Bank's High 5 priorities is to "industrialize Africa." During the annual meetings, a number of the Bank's experts gave their take on what accelerating African industrialization really means. Read more about AfDB in this BRIEFING.

On Wednesday, 10 April, the President and his delegation will attend the 3rd Consultative Forum of the Southern African Development Community ministers of finance.

The African Development Bank Governor's Consultative Committee (GCC) Meeting, to take place on the sidelines of the IMF-World Bank meetings on 11 April, is expected to be one of the key highlights of the DC trip. The meeting aims to move forward discussions on the 7th General Capital Increase (GCI-VII) of the Bank group. It follows the December 2018 Regional and Non-Regional Governors Consultation meeting held in Rome.

The President's four-day agenda will end with a ministerial meeting of Finance and Economic ministers from Africa. Dr Ngozi Okonjo-Iweala; a development economist and former Nigerian Finance Minister and Lord Nicholas Stern, professor of economics and chair of the Grantham Research Institute on Climate Change, will be in attendance.