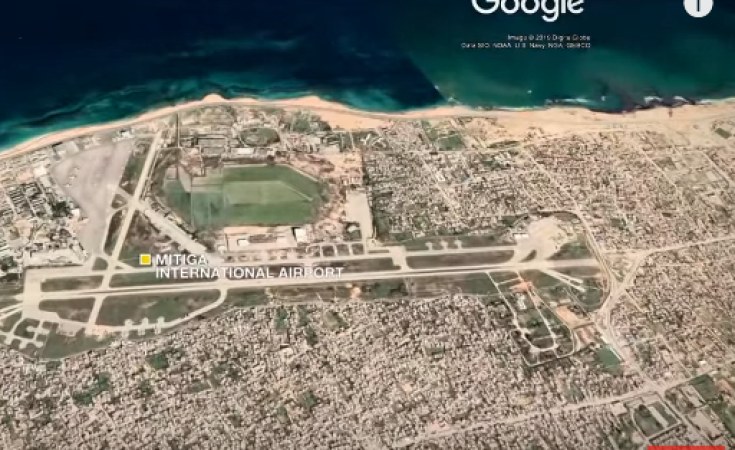 Libyan authorities have closed the only functioning airport in Tripoli after an airstrike Monday, as a battle for the capital continues between rival forces in the country.

Security officers at Mitiga airport east of the Libyan capital said that no side had yet claimed responsibility for the attack, which hit the runway but caused no casualties. Forces loyal to military commander Gen. Khalifa Haftar have been continuing a push aimed at taking the capital.

Libya's U.N.-backed prime minister, Fayez Sarraj, has called the action by Haftar an attempted coup. Haftar and his forces appear to have gained ground along the outskirts of the capital, but Sarraj said government troops are prepared to confront them.

The United Nations issued an "urgent appeal" for a two-hour truce in the suburbs of Tripoli to evacuate civilians.

U.N. spokesman Stephane Dujarric said the truce would allow for "the provision of emergency services and the voluntary passage of civilians, including those wounded, from the areas of conflict." He said the clashes are affecting residential areas, and "an unknown number of civilians are unable to flee these locations."

Dujarric said that 3,400 people have been displaced by the latest violence, which began on Thursday.

U.N. Secretary-General Antonio Guterres, in a statement released late Monday, said "there is no military solution to the Libya conflict" and called on all parties to "engage in immediate dialogue to reach a political solution." He also offered U.N. help to get the dialogue started.

The International Rescue Committee estimates 21 people, including two health workers, have been killed in the fighting, warning that the number of those in need of humanitarian assistance will rise as the conflict continues.

The fighting marks the first surge of unrest in Libya since the fall of dictator Moammar Gadhafi in 2011.

The U.N. envoy to Libya, Ghassan Salame, condemned the attack on Tripoli's airport. In a statement Monday, he called the incident "a serious violation of humanitarian law."

U.S. Secretary of State Mike Pompeo called for an immediate halt to the advance by Haftar's forces and said all of the parties involved "have a responsibility to urgently de-escalate the situation."

In anticipation of violence, the United States has pulled a contingent of troops out of Tripoli.

The U.S. has maintained a small number of troops in Libya to provide support for diplomatic missions, counterterrorism activities and improving regional security.

Margaret Besheer contributed to this report from the United Nations.

Europe Split on Response to Libyan General's Tripoli Offensive
Tagged:
Copyright © 2019 Voice of America. All rights reserved. Distributed by AllAfrica Global Media (allAfrica.com). To contact the copyright holder directly for corrections — or for permission to republish or make other authorized use of this material, click here.