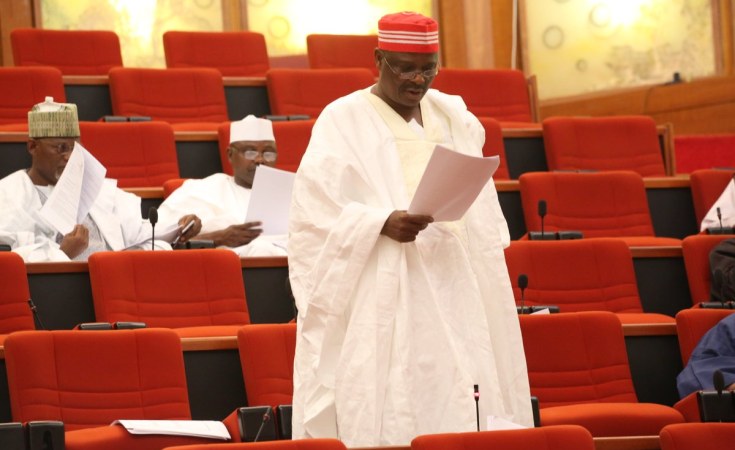 Former Senate leader, Senator Ali Ndume on Monday vowed not to drop his ambition of becoming the Senate President of the ninth Senate.

The meeting started around 3.20pm when Ndume arrived the Vice President's office.

Ndume is one of the frontline aspirants for the position of Senate President for the 9th Senate in June.

He had declared his intention to run for the number three highest political office in the land despite the endorsement of the current Senate Leader, Ahmed Lawan by the ruling All Progressives Congress for the same position.

Though his stiff opposition to some policies of the Senate President, Dr. Bukola Saraki appears to be the obstacle he may face in achieving his dreams.

After the closed meeting, Senator Ndume declined to talk to State House correspondents that waited to know the agenda and outcome of the meeting with the Vice President.

He said that he was still consulting and should not make any comments on the meeting.

When asked whether he would succumb to pressure by his party to step down for the party's candidate, Senator Ahmad Lawan, he rhetorically asked, "Me, step down? I am still consulting."

Also reminded that he was said to be opposition bride, he also replied, "Me that is regarded as enemy by opposition?

Senator Ndume was suspended as a Senate leader because of his opposition to the non confirmation of the acting Chairman of the Economic and Financial Crimes Commission, EFCC and his loyalty to President Muhammadu Buhari.

He was the Director of APC Presidential Campaign for the North East.

Lawan Moves Closer to Senate Presidency As Goje Bows Out
Tagged:
Copyright © 2019 Vanguard. All rights reserved. Distributed by AllAfrica Global Media (allAfrica.com). To contact the copyright holder directly for corrections — or for permission to republish or make other authorized use of this material, click here.