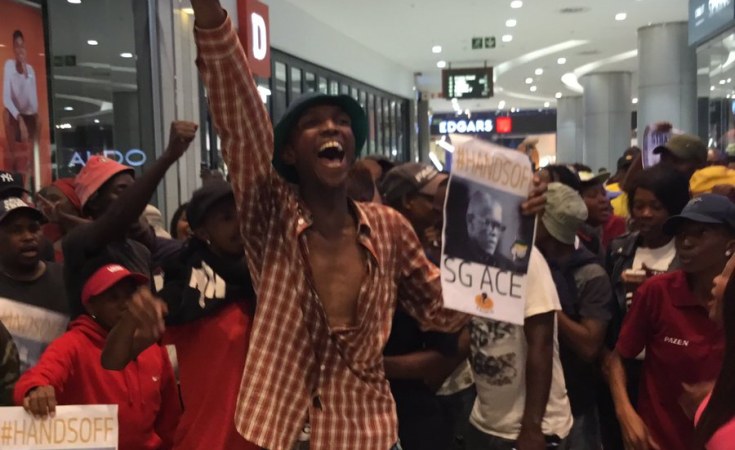 The ANC has distanced itself from the disruption of the launch of Pieter-Louis Myburgh's book, Gangster State: Unravelling Ace Magashule's web of capture , as well as plans to burn copies of the book.

ANC acting national spokesperson Dakota Legoete emphasised that those who disrupted the launch at Exclusive Books in Sandton City on Tuesday night had not done so in the name of the ruling party or on behalf of Magashule, the ANC's secretary general.

He said they viewed the actions in a very serious light.

News24 reliably understands that at least five books were destroyed and, while the store manager was accosted and pushed around, there were no reported customer injuries.

It was earlier reported that the ANC Youth League (ANCYL) in the Free State planned to burn copies of the book, which contains allegations that Magashule led the province with an iron fist.

Announcing the planned burning at the Mangaung dumping site, provincial ANCYL spokesperson Sello Pietersen said: "We therefore urge society to bring along as many copies of this puke as possible, as well as any material that reflects the barbaric past, such as the old apartheid flag, along to our fireplace".

Legoete said the above actions would bring about regression.

"Whatever [Myburgh] wrote there was within his right to express. So if there is any challenge from the SG (secretary general) as an individual, he requested that opportunity to deal with this matter legally."

Protesters earlier sang and danced across Sandton City's fourth floor where Exclusive Books store is situated, after ripping some books inside the store. Some chanted "Ace, Ace, Ace... ".

ANCYL spokesperson in the Fezile Dabi region in the Free State, Thabo Baleni, said they were protesting because they were voicing their "discomfort with the book released by Pieter-Louis Myburgh".

"I actually read the book myself and I could point to it to say many of the pages actually get to speak about undisclosed sources, and these remain allegations."

Baleni said the timing of the release of the book was suspicious.

"This comes not as a shock that it's even just a month before the general elections, because an attack against an ANC leader is the losing of confidence for the voters who are supposed to be [voting] for the ANC."

Kirk added that they had not expected as many people to show up at the launch as it was a private event that could be attended strictly by invitation.

He said the bookstore would be working on what happened at the launch internally and apologised to customers who experienced the disruption.

"I really wish it hadn't happened. It was unnecessary and tragic. The author was very scared and threatened and all he wanted to do is launch a book."

Police spokesperson Captain Mavela Masondo said officers monitored the situation and no arrests were made.

"No case was opened and there were no injuries. We cannot investigate until the owner of the shop opens a case to say there was damage to property. As for now, no case has been opened."

ANCYL in the Free State Plans to Burn Controversial Book