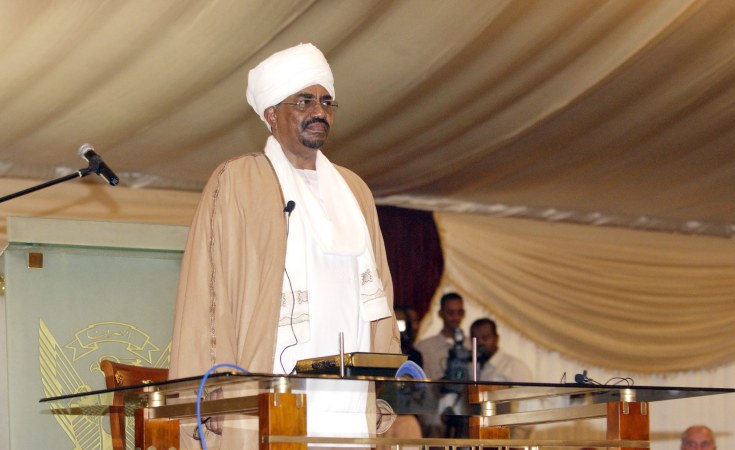 Both the Associated Press and Reuters say they have learned from government sources that the 75-year-old ruler will step down and that consultations are underway to form a transitional council.

Reports of al-Bashir's ouster came hours after Sudan's state-controlled television said the army will make an "important statement" sometime Thursday, but offered no details about the upcoming message.

Thousands of residents of Khartoum poured into the streets of the Sudanese capital and marched to the headquarters of the country's military, where protesters have staged a sit-in since last Saturday. At least 22 people have been killed in clashes with security forces, according to activists.

There are reports that army vehicles carrying troops have surrounded the presidential palace, which is on the grounds of the military headquarters. Reuters and the French News Agency (Agence France Presse) are reporting that soldiers have raided the headquarters of al-Bashir's ruling party.

Al-Bashir, who came to power in an Islamist coup in 1989, imposed a nationwide state of emergency Feb. 22 in an attempt to suppress the protests after an initial crackdown failed. The government said weeks ago that 31 people had been killed, but the group Physicians for Human Rights estimates the death toll is at least 60.

Al-Bashir is wanted by the International Criminal Court on charges of war crimes, crimes against humanity and genocide in connection with atrocities in the western region of Darfur.

Previous Story
What Does the Sudanese Uprising Mean for President Yoweri Museveni?
Next Story

What Does the Sudanese Uprising Mean for President Yoweri Museveni?

Sudanese Opposition Rejects Military Takeover
Tagged:
Copyright © 2019 Voice of America. All rights reserved. Distributed by AllAfrica Global Media (allAfrica.com). To contact the copyright holder directly for corrections — or for permission to republish or make other authorized use of this material, click here.