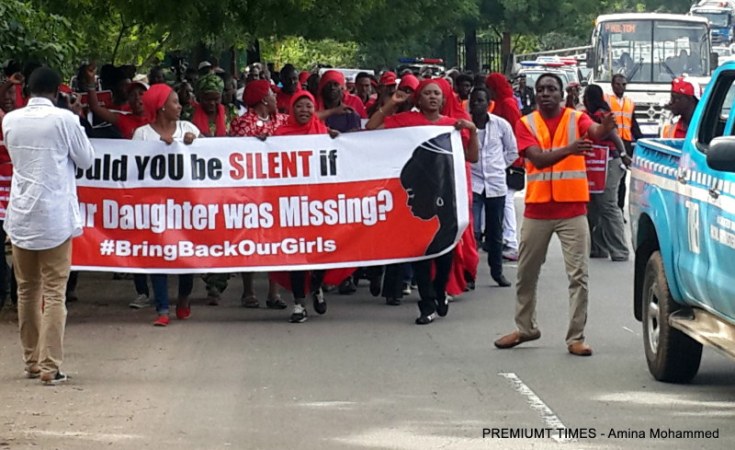 The #BringBackOurGirls (BBOG) advocacy group will today in three continents, begin a three-day event to mark the fifth anniversary of the Chibok schoolgirls' abduction by Boko Haram.

276 schoolgirls were kidnapped from Government Girls Secondary School, Chibok, Borno State, on the night of April 14, 2014, making Sunday, April 14 the fifth anniversary of the event.

In a statement, the #BringBackOurGirls said it will host simultaneous events in Abuja, London, New York and Washington DC "to mark this sad anniversary."

BBOG said it would "mark the fifth year of captivity for 112 Chibok Girls by gathering with members of the Chibok community and members of BBOG from all over Lagos to remind our government and the world that they are still missing."

The activities will come to a climax on Sunday, April 14 with an interfaith vigil at Falomo Roundabout, Ikoyi between 5p.m. and 7p.m.

On Sunday in London, a panel of discussants will consider the topic, #BlackLivesMatter and the #BringBackOurGirls movement: Online struggle for offline justice. This will hold between 4pm and 7pm at The Africa Centre, 66 Great Suffolk Street, London SE1 0BL.

In New York, the event will be marked with an over-night vigil at the Nigerian Embassy from 10p.m. on Sunday, and 10am Monday

The organisers said they would not relent in their advocacy and demands for the rescue of the country's school children and fellow citizens from captivity.

"We demand: justice for the slain, resettlement and rehabilitation for people displaced by the violence, safe schools, the launch of the National Missing Persons Register; and proper welfare, equipment and support for officers and families of our police and armed forces," the organisers said.

Did Jonathan Prevent UK from Rescuing Chibok Girls?
Tagged:
Copyright © 2019 The Guardian. All rights reserved. Distributed by AllAfrica Global Media (allAfrica.com). To contact the copyright holder directly for corrections — or for permission to republish or make other authorized use of this material, click here.