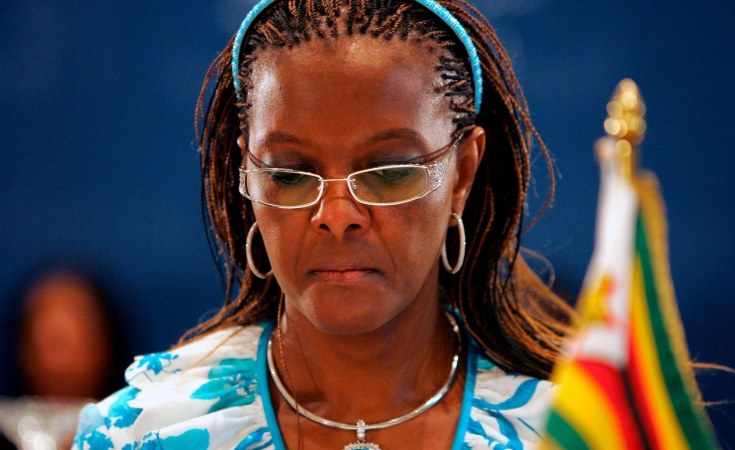 Shortly before the Zanu PF conference held at Victoria Falls in early December 2015, the Women's League proposed a resolution to reintroduce a provision that one of Zanu PF's two vice-presidents would have to be a woman.

A similar clause had been used to deny Mnangagwa's appointment as Vice-President in 2004 when Joice Mujuru had ascended to that office.

Although this time it was not clearly aimed at him, in the context of the other attacks on his supporters it appeared to be designed to frustrate his ambitions again.

The resolution was passed at the conference, generating intense speculation regarding which vice-president would have to make way for a woman, possibly for Grace Mugabe herself. In addition Mugabe issued an unprecedented attack on some veterans at the conference, stating, "Some people brag to others, 'I am so and so, I went to war and you did not go' nonsense. Stop bragging with your war credentials.

Some will ask you, 'Did you go alone?' or 'What did you do there?'" The statement appeared to bolster Grace Mugabe's aspirations for higher office; she was a child during the war and so has no veterans' credentials.

Over the last few years Grace Mugabe's power has grown in inverse proportion to Mugabe's declining health. As he has become more dependent on her, so her influence within Zanu PF has increased.

As 2015 ended Zanu PF, rather like the MDC, was more divided than ever, with three factions emerging from the original entity supporting Mujuru, Mnangagwa and Grace Mugabe.

With the opposition still seriously divided and Zanu PF becoming increasingly incoherent, the beginning of 2016 sees Zimbabwe with an unprecedented and dangerous power vacuum.

Aside from a few low-key remembrances held by white former Rhodesians outside Zimbabwe, the day passed without much comment within Zimbabwe. Fifty years of misrule and abuse of power have ravaged Zimbabwe, leaving its economy in a pitiful state and its political system in chaos.

Zimbabweans have reaped a bitter harvest from that fateful day. After decades of struggle, Zimbabwe's economy is worse off than it was in the mid-1960s and it has made painstakingly slow progress towards a new democratic order.

As the American Civil War drew to a close in March 1865, Abraham Lincoln, in his second inaugural address, made the following comment:

Fondly do we hope, fervently do we pray, that this mighty scourge of war may speedily pass away.

Yet, if God wills that it continue until all the wealth piled by the bondsman's two hundred and fifty years of unrequited toil shall be sunk, and until every drop of blood drawn by lash shall be paid by another drawn with the sword, as was said three thousand years ago, so it must be said, "The judgments of the Lord are true and righteous altogether."

I and many other Zimbabweans have prayed for decades for corrupt and brutal rule to end, but there does not seem any immediate prospect of that.

As Lincoln wrestled with why God allowed a vicious war to drag on, I have battled with the question why a vicious regime has remained in power for so long.

The answer may be found in Lincoln's musings. While colonialism and white rule brought hospitals, schools, roads and railways, it also disrupted an existing culture and humiliated generations of black people. That legacy caused a war which in turn poisoned our entire society. One treacherous legacy resulted in another.

Many of the policies introduced by Zanu PF in the last 15 years have been utterly self-destructive. For example, the ruinous land policies have all but destroyed the most important segment of Zimbabwe's economy.

If ever there was a case of a national cutting-off of one's nose to spite one's face, Zimbabwe provides it writ large.

Intelligent people within Zanu PF have all but destroyed their own legacy. One explanation for this must be the effect that Post-Traumatic Stress Syndrome has had on an entire generation of Zimbabweans.

The reality of that legacy was forcefully brought home to me when I met Zimbabwean war veterans in November 2010. Zimbabwe has experienced similar trauma, indeed even worse, in one respect, than post-Vietnam America.

In Zimbabwe many of the protagonists are still in the same country the war was fought in; nothing has been done to heal the wounds of the 1970s or 1980s, which have been allowed to fester.

We still have tens of thousands of men and women fighting the war. It doesn't justify the gross human rights abuses that have been committed since 1980, but it does explain some of them.

Until we have some process to enable us all to come to terms with our past, our past will continue to haunt us and stunt our ability to develop. Furthermore, unscrupulous politicians will continue to exploit that past to consolidate their power.

A poisoned society is not the only dreadful legacy of Zimbabwe's civil war. Another is that war itself has become acceptable in Zimbabwe, both domestically and internationally.

There has never been a serious debate within Zimbabwe that our civil war was avoidable.

It is just a given that there were never any other alternatives.

While it is mere speculation, and written with the benefit of hindsight, the fact remains that our war was avoidable.

I have no doubt that had Todd remained in power, like De Klerk in South Africa, he would have done everything possible to avoid war.

It is hard to imagine him detaining nationalist leaders rather than talking to them.

Furthermore, the likes of Martin Luther King are not eulogised in Zimbabwe.

It is almost sacrilegious to suggest that had nationalist leaders used non-violent methods, war might have been avoided, even in the face of RF oppression.

Whether the RF could have been defeated by Gandhian methods is a moot point, but the tragedy is that that suggestion is not even up for debate.

War is considered an acceptable means of resolving major national or international problems and that culture is reflected by our ready engagement in Gukurahundi, Mozambique and the DRC since independence. It is also demonstrated in our massive defence spending at the expense of education, health and housing.

I am not a pacifist -- I recognise that some wars, such as World War II was, are unavoidable and necessary. The ongoing tragedy for Zimbabwe is that war is not viewed as a last resort, as an evil that should be avoided at all costs. Rather it remains on the tip of our tongues and its use is readily threatened. The second tragedy is that because war itself is lauded, its child, violence, has become an acceptable means of resolving domestic political problems. In fact, violence is so deeply rooted in our political culture that it has become our default tactic.

Political rhetoric in Zimbabwe is still dominated by threats of violence.

Even today, with all the division and confusion within our political parties, the threat remains that Zimbabwe will plunge back into violence to determine who succeeds Mugabe.

But perhaps the gravest tragedy is that because we have extolled war so much, we have become blinded to the reality that it rarely achieves its intended purposes. Nationalist forces fought the struggle to liberate Zimbabweans from oppression, which in turn was intended to deliver economic and social development for the vast majority of Zimbabweans.

While the war ended racial discrimination and secured some major social benefits, such as the expansion of education, the fact remains that Zimbabweans are still oppressed by a tiny, corrupt ruling elite and the average per capita income is lower now than it was when the war was first started half a century ago. Tied to the debate about whether our war was avoidable is the question about whether greater liberty and economic development might have been achieved had war been avoided. Tragically, this question itself is anathema to many; but until we learn that lesson about our past, Zimbabweans will not fully understand why our nation continues to flounder.