Nigeria: A Look At Nsibidi - the Long Lost Nigerian Writing 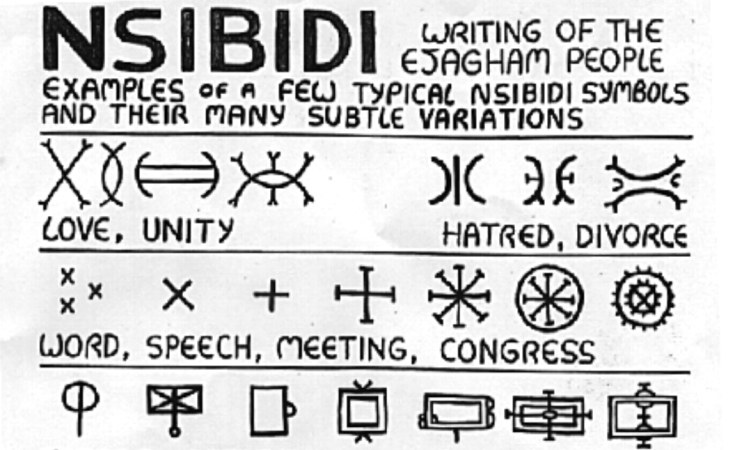 Long before the Europeans and what is today known as the western civilization came to West Africa, the Ekoi (Ejagham) people in present-day Nigeria had developed a unique form of ideographic writing called Nsibidi.

Author P.A Talbot who lived during the colonial times described it as "a kind of primitive secret writing" which was communicated on "cut or painted on split palm stems".

However, historian and Revered J.K Macgregor's in his work, Some Notes On Nsibidi likened it to an ordinary writing. "The use of Nsibidi is that of ordinary writing. I have in my possession a copy of the record of a court case from a town of Enion [Enyong] taken down in it, and every detail ... is most graphically described".

Although there is no generally accepted date, scholars say it has been in use in Ekoi for as long as 400 CE. Its oldest archaeological evidence dates back to 2000 B.C. Nsibidi was used to decorate the skin, calabashes, sculptures, and clothing items, as well as to communicate messages on houses.

Strangely, Nsibidi and the Egyptian Hieroglyphics share some characters. Like the Hieroglyphics, Nsibidi was taught to select secret groups that exuded power and authority. They were largely in control of the arms of government, hence its exclusivity. Among them is the Ekpe Leopard Secret Society. The Ekpe, still found in present-day Abia, are often seen wearing a particular clothing during formal events. This cloth is known as the Ukara Ekpe.

In those times, Ukara Ekpe was woven in Abakiliki and inscribed with the Nsibidi logographic in some Igbo-speaking towns such as Arochukwu and Ohafia in Abia State. The impressions on the Ukara have different meanings. Asides the power symbol, some communicate wealth status.

Although there is no generally accepted date, scholars say it has been in use in Ekoi for as long as 400 CE. Nsibidi was used to decorate the skin, calabashes, sculptures, and clothing items, as well as to communicate messages on houses.

Read More: The Namibian Tribe Where Sex Is Offered To Guests

According to a book, The Foundation of Igbo Studies written by Nnamdi Oraka in 1766, the Igbos witnessed a gradual replacement of the Nsibidi with the Isuama Igbo Alphabet (from Isu in Nkwerre, Imo state and made popular by Olaudah Equiano) with the Union Igbo Alphabets made popular by the Anglican cleric, Rev. Thomas Dennis in 1900. This later morphed into the Central Igbo Alphabets started by Catholic priests in 1929, before its further transformation into the present-day Onwu Alphabets approved by Mazi Onwu alongside other Igbo scholars in 1961.

Nsibidi Outside The Shores Of Biafra

It was not until 1904 that Nsibidi caught the attention of the outside world after T.D Maxwell noticed that it was being used in pottery and body art.

In 1909, Macgregor in his work argued that Nsibidi has its root in the Uguakima, Ebe or Uyanga tribes of the Igbos. According to him, legend has it that this language was taught to the Igbos by baboons. Baboons it is believed are sacred creatures that pose as gods in some societies.

However, this theory has been discarded by historians who say that the Nsibidi originated from the Ekoi people, neighbours of the Efik and Ibibio ethnic groups in Nigeria before it was adopted by the Igbos.

The transatlantic slave trade also saw Nsibidi being exported to the Caribbean islands such as Cuba, Jamaica, Venezuela and Haiti and

Making an ukara Ekpe cloth: an Ezillo Igbo man draws a grid for nsibidi designs resist dyed with indigo, Ezillo, Ebonyi State, Nigeria. Photo: Eli Bentor. Several Igbo groups have hands in the steps of the making of ukara. The nsibidi signs can be ordered by the commissioner. pic.twitter.com/xIBCOKsA42

have become what is today known as the Anaforuana writings of the Akabua and Vévé symbols.

The rejection and death of Nsibidi

Not many Igbos and the Ekoi are aware of the Nsibidi. Unfortunately, the advent of western education reduced the rate of Nsibidi literates leaving a few to have little or no knowledge about this once-scared language. Asides this, much of Nsibidi is attributed to witchcraft hence its abandonment in these areas. While Anaforuana meaning "they took away our land" in the Igbo language is still embraced by the Igbo Cubans, Haiti tells a different tale. Vévé, a religious symbol is now rejected by many Haiti Christians because of what many fear to be voudou (voodoo) connotations especially as it is used as a representation of Loa (the Haitian Spirit) who acts as an intermediary between the Bondye (the Supreme Creator) and humanity.

Despite these, arguments have arisen that rather than neglect our cultural roots, what Renaissance art is to Christians is what Nsibidi should be to Africans.