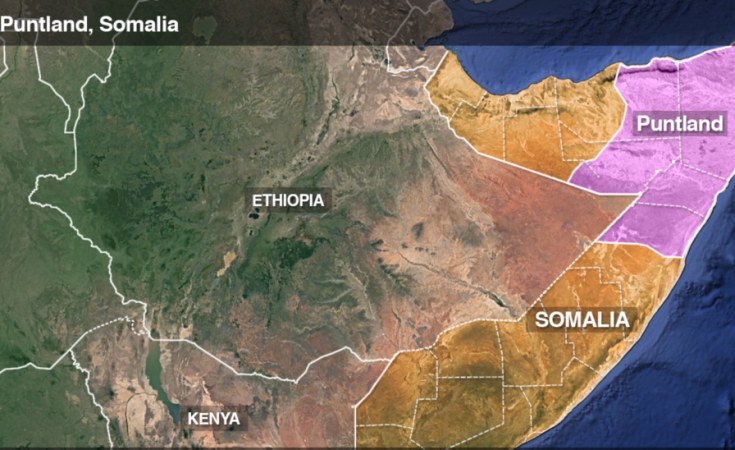 The deputy leader of the Islamic State group in Somalia has been killed in an airstrike, a Somali regional minister told VOA.

Gallan said the strike hit the vehicle Dhoqob and another passenger were travelling in. He said both men were killed but the other person has not yet been identified.

"The vehicle was burned," said a witness who didn't want to be named.

IS Somalia is led by Sheikh Abdulkadir Mumin, a former scholar for al-Shabab. In October 2015 he defected from the group and pledged his allegiance to IS leader Abu Bakr al-Baghdadi.

Dhoqob was Mumin's right-hand-man and has appeared in videos produced by the group. Mumin himself survived another airstrike in his mountainous hideout in Bari region in November 2017.

"Killing one of their top leaders will speed up their eradication," Gallan said.

Puntland officials have not commented on who carried out the attack but the U.S. military in Africa has been conducting relentless strikes against militants in Somalia. This year alone, U.S. has carried out more than 30 airstrikes, all of them against al-Shabab.

IS has 200-300 men in Somalia according to experts. Al-Shabab and IS have recently been fighting in the eastern mountainous areas since December last year.

Al-Shabab has vowed to eliminate its rival IS, accusing it of "dividing the jihadists." Security officials told VOA Somali that IS has lost some of its territory to al-Shabab.

Fadumo Yasin contributed to this report from Bosaso in Puntland.

Al-Shabaab Claims Responsibility for Targeted Blast in Somalia
Tagged:
Copyright © 2019 Voice of America. All rights reserved. Distributed by AllAfrica Global Media (allAfrica.com). To contact the copyright holder directly for corrections — or for permission to republish or make other authorized use of this material, click here.