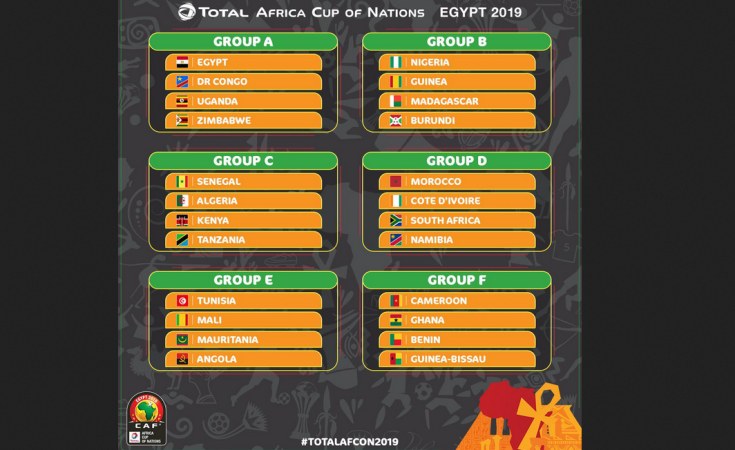 Photo: CAF
AFCON - Which is the most exciting group?
Vanguard (Lagos)

Madagascar, the big island country drawn in the 2019 Africa Cup of Nations' Group B is not losing any sleep of possible annihilation by the two big teams of the group - Nigeria and Guinea.

Rather, the debutants feel they can overcome all the teams in the group including fellow debutants, Burundi. Madagascar, whose national team is called Barea, according to the newspaper, L'Express de Madagascar recalls the tough time their clubs had given Nigerian clubs in the past.

First to be recalled was the 1979 encounter of Bendel Insurance and AS Sotema in the then African Winners' Cup that is now called the Confederation Cup. Bendel Insurance won the first leg match of the quarterfinals encounter, 2-0 in Madagascar only to surprisingly lose by the same margin at the National Stadium, Lagos. Bendel, however, survived 5-3 by penalties.

The newspaper was less flamboyant in recalling the semi-final clash of Bendel United and FC BFV of Madagascar in the 1989 edition. Bendel United won 4-1 at home and forced a goalless draw in Madagascar.

L'Express de Madagascar placed its optimism on the Bendel Insurance match of 1979 while overlooking the fact that in four previous encounters with the Super Eagles' Madagascar did not score a goal and lost three of the matches.

The newspaper also believes Madagascar can also overcome Guinea. Another Madagascar publication, Newsmada, translated from French believes the first steps of the Madagascar side to glory in their maiden Africa Cup of Nations outing is "less laborious than expected".

The newspaper rejoiced that Madagascar had avoided the tough teams of Egypt, Cameroon and Senegal. To the publication, Nigeria and Guinea are better options for Madagascar.

It claims that apart from Nigeria, the other opposition that the Coach Nicolas Dupuis will have to dismiss is Guinea. The newspaper is of the opinion that even if Madagascar is unable to overcome Nigeria and Guinea, it will do the same for Burundi and qualify as one of the best third-placed teams, even though direct qualification was desirable.

All Eyes on Egypt as African Teams Await AFCON Draws
Tagged:
Copyright © 2019 Vanguard. All rights reserved. Distributed by AllAfrica Global Media (allAfrica.com). To contact the copyright holder directly for corrections — or for permission to republish or make other authorized use of this material, click here.