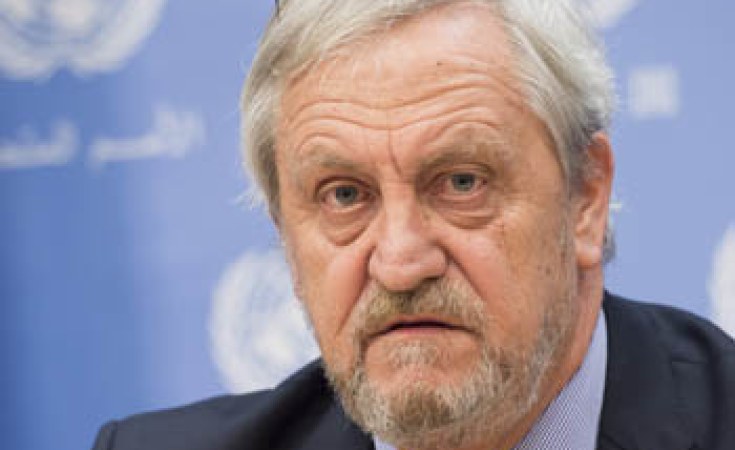 "He is being put at disposal of the African Union, which we understand will be engaged in some mediation capacity between the transitional council in Khartoum and various parts of Sudanese society," U.N. spokesman Stephane Dujarric told reporters Tuesday. "Mr. Haysom will be there to support them in whatever way he can."

He said that U.N. chief António Guterres had spoken Monday with Moussa Faki Mahamat, the chair of the African Union Commission, and told him that Haysom would be available.

"The secretary-general is very attached to his partnership with the African Union and he will do whatever he can to support their efforts," Dujarric said.

Haysom was most recently the U.N.'s top man in Somalia, but was expelled after four months by the Somali federal government, after he tried to intervene on behalf of a former al-Shabab leader who sought to take part in elections but was banned by Somalia's electoral commission.

Haysom, a South African lawyer, was previously the U.N. special envoy for Sudan and South Sudan and was head of the U.N. mission in Afghanistan.

The African Union Peace and Security Council issued a strong statement Monday condemning the military takeover in Sudan as an unconstitutional change of government, and demanding the military hand over power to a transitional civilian-led political authority within 15 days.

Failure to do so, the AU warned, would result in Sudan's suspension from participation in all African Union activities until constitutional order is restored.

Protest leaders have called for the new ruling military council to be dissolved and replaced by a civilian one, in the wake of the military coup that ousted President al-Bashir last week.

Mohamed Naji, a senior leader of the Sudanese Professionals Association (SPA) - the main group behind months of protests against al-Bashir - said the group wants to see a civic council formed that includes representatives from the army.

On Sunday, Sudan's military council said it would name a civilian prime minister and cabinet minister to help run the country but would not name a civilian to the office of the president. A military spokesman also said the council would not stop the demonstrations that are continuing.

The SPA has called for more demonstrations until its demands are met.

Al-Bashir is wanted by the International Criminal Court on charges of war crimes, crimes against humanity and genocide in connection with atrocities in the western region of Darfur. However, the military leaders have said he will not be turned over to the ICC, but will instead be tried in Sudan.

Will Justice Rise With Al-Bashir's Fall?

African Union Decries Arrest of Sudan's Al-Bashir
Tagged:
Copyright © 2019 Voice of America. All rights reserved. Distributed by AllAfrica Global Media (allAfrica.com). To contact the copyright holder directly for corrections — or for permission to republish or make other authorized use of this material, click here.