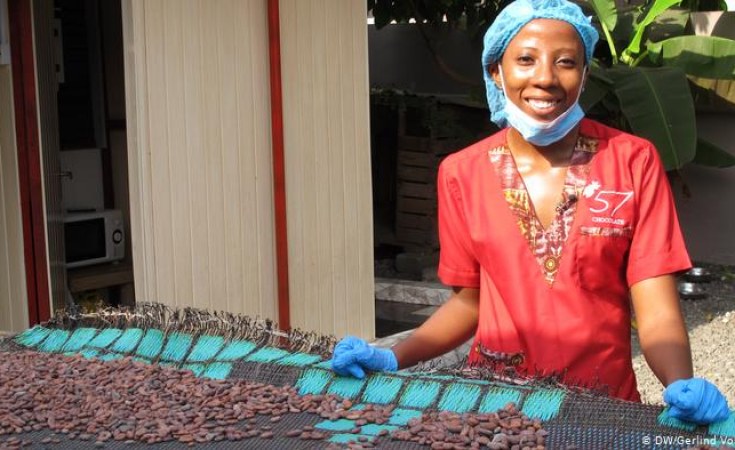 The world's fastest growing economy is located in Africa: Ghana's economic strength is expected to soar in 2019. Many other African countries lag far behind, says the IMF report. What's the secret behind Ghana's success?

Ghana's economy is skyrocketing. That is what the World Bank and the International Monetary Fund (IMF) predict for this year. The IMF talks of a growth rate of 8.8 percent in its World Economic Outlook, which would make Ghana the fastest growing economy in the world in 2019. Last year, the country's economy only grew by 5.6 percent, putting it in sixth position. Where does this new impetus come from and in which sectors is Ghana doing particularly well?

Adu Owusu Sarkodie from the University of Ghana believes the main source of growth is the oil sector. "We have discovered new oil fields [.....] companies have started operating, they have intensified their operations," he said in an interview with DW. In the list of top African countries growing economically, Ghana is closely followed by its neighbor Ivory Coast with 7.5 percent, and Ethiopia with 7.7 percent. It is interesting that the growth rate from 2018 to 2020 of those two countries appears to be consistent, while Ghana's growth is predicted to decline again in 2020.

"I think this is more a one-off,", Papa Ndiaye, Head of the Regional Studies Devision at the IMF's African Department, told DW. "We don't expect this growth rate (of 8.8 percent) to be sustained over the medium term. And when you look at it in per capita, that is still smaller than what countries like China have experienced in the past." Ndiaye confirmed that Ghana's economic growth is expected to slow to a level of around 4.5 to 5 percent.

For Africa's number one growth state, Ghana, oil is not the only factor driving the economy. "The non-oil sectors, agriculture, manufacturing and services, they are also picking up. Now they are all growing positively," Sarkodie said.

The agriculture sector has received a major boost over the past two years, thanks to a strong focus by policy-makers on food and jobs. For example, 200,000 farmers received improved seeds and fertilizers. The sector remains a major backbone of Ghana's economy. According to Agriculture Minister Owusu Afriyie Akoto, the program has led to a good harvest across the country. "We are expecting a bumper crop because of the impact that this great program has had on agriculture, even in its infancy," he said.

But where there are winners, there are also losers. Angola comes in last on the list of African countries, with a predicted economic growth of just 0.4 percent. Last year it suffered a decline of 1.7 percent. South Africa is also far behind, with an expected growth rate of only 1.2 percent, an increase of 0.4 percent on 2018. Third from last is oil giant Nigeria, with a growth rate of 2.1 percent.

"These countries have been hit very hard by the decline in commodity prices," Ndiaye said. "You have to go back to the 1970s to find something of similar magnitude. These countries are now slowly recovering but it will take it will take some time. It also requires for countries to implement reforms to diversify the economy and to boost private sector activity by removing some of the constraints that are the biggest impediments to growth, including restoring a better business environment."

'Economy must be Ghana owned'

Ghana is the world's second biggest producer of cocoa, which is probably also a reason why the West African country is the continent's and the world's leader when it comes to increased economic strength. But unlike the agricultural sector, where a lot of Ghanaians are playing a role, investments in the mining and oil sectors have been largely foreign led. According to Sarkodie, this is a problem, even though these investments have a long term effect.

"My major concern has to do with the source of growth," he told DW. "The GDP is a domestic product, it doesn't matter what is produced by foreigners or Ghanaians. But we know that in Ghana most of our companies are foreign owned." This means, Sarkodie says, that "the impact on Ghanaian lives will be minimal."

To be able to attract investors, countries need well-designed reforms to assure entrepreneurs of returns. That is what Ghana has been trying to do. Three years ago, the government secured a loan from the IMF of $925.9 million (€820 million). The arrangement, which ended in early April, aimed to restore debt sustainability and macroeconomic stability in the country in order to foster a return to high growth and job creation while protecting social spending. Several economic reforms, including reducing the budget deficit and cutting down on corruption, were rolled out. According to Ghana's finance minister, Ken Ofori Atta, some of these measures have repositioned the economy. "Inflation is at a single digit, which is good. The growth has been strong, six percent through the third quarter of last year. Our budget deficit has gone down and we are also getting surpluses in our current account."

Sarkodie agrees that Ghana's domestic economic management has been on the right track. "We went into the IMF program seeking policy credibility; in fact, at the time we went to the IMF program, things were very bad. Now, all the macroeconomic indicators look good. Inflation is down, the exchange rate is a bit rough now, but I am sure it will be stabilized," he said.

What needs to happen now is that conditions for the high growth rate to be sustained are created, says Ndiaye. "And that means containing our abilities. That means boosting private sector activity, making sure that the private sector is leading growth. And it also requires making growth inclusive because that's one of the key requirements for sustaining a high growth rate for a long period of time."

Ghana is now looking to boost technological innovations and get more young people involved in sustaining and improving the country's economic performance.

Isaac Kaledzi contributed to this report.