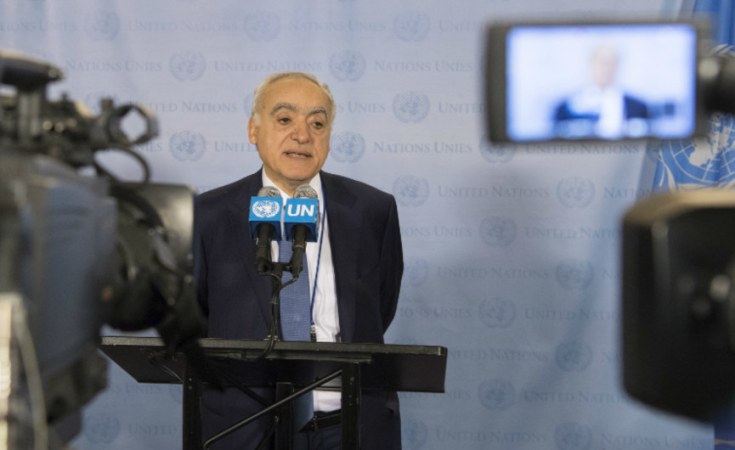 Eskinder Debebe/UN Photo
Ghassan Salamé, Special Representative of the Secretary-General and Head of the United Nations Support Mission in Libya speaks to the press in September 2017.
Deutsche Welle (Bonn)

The council has failed to agree on a joint call for a ceasefire in Tripoli, where rival militias have been fighting for two weeks. Germany, the current council president, has called for a meeting to discuss the conflict.

Germany on Wednesday called for a meeting of the United Nations Security Council to discuss the escalating conflict in Libya after the 15-member body failed to agree on a draft resolution calling for a ceasefire.

Earlier this month, the self-styled Libyan National Army (LNA), under the leadership of General Khalifa Haftar, made a push to take Triopli. The offensive came days before UN-backed peace talks, resulting in them being postponed.

The two-week battle has resulted in the deaths of 189 people, the World Health Organization (WHO) reported on Wednesday. Additionally, more than 25,000 people have been displaced from the conflict zone, the WHO said.

The UN Security Council, which Germany heads this month as part of a dual presidency with France, is expected to conduct a closed-door session on Thursday to discuss how to act as the conflict in Tripoli continues.

The resolution - drafted by the United Kingdom, a permanent council member - called on all sides in the Libya conflict "immediately to recommit" to UN peace efforts. It also urges all council member states "to use their influence over the parties" to ensure the that the resolution is implemented.

Equatorial Guinea objected to the draft resolution on behalf of the three African nations on the council, according to German news agency DPA.

During negotiations of the draft, Russia had been keen not to characterize the LNA as the the force attacking Tripoli, diplomats told DPA. Russia, as well as France, has more or less converted to support Haftar, who has the backing of Egypt, Saudi Arabia and the United Arab Emirates.

Ghassan Salame, the UN ambassador for Libya, on Wednesday called for an immediate halt to attacks on Tripoli.

Migrants Under Threat As Battle for Tripoli Sets in