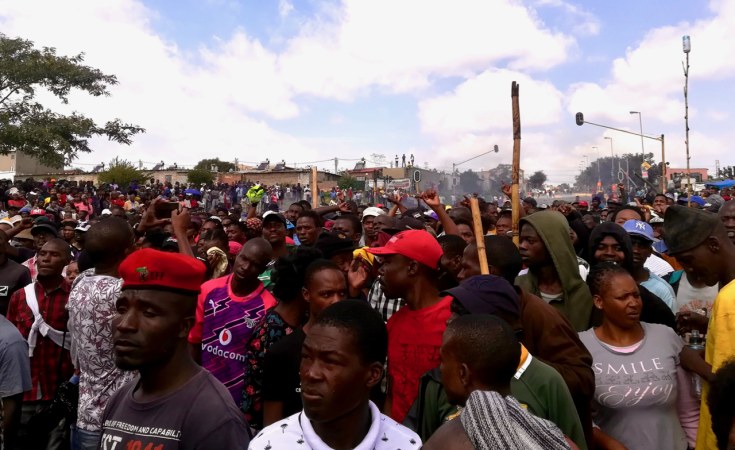 Zoë Postman/GroundUp
Thousands of residents of Alexandra in Johannesburg shut down the township.
The Conversation (Johannesburg)
analysis By Steven Friedman

Poor people in South Africa often feel that the only way they can be heard is to protest. The past few days have shown that not even this gets them a hearing.

Protests in the townships and shack settlements where most poor people live in Johannesburg, Tshwane and Cape Town are in the news. These are the three metropolitan areas controlled by the opposition Democratic Alliance (DA).

The party insists that the protests have been organised by the governing African National Congress (ANC). The DA has has laid a charge against the ANC with the police, claiming that it has proof of the party's involvement.

Much of the media have supported, denouncing the ANC for disrupting the calm of these cities in a cynical attempt to embarrass the main opposition party during the current national election campaign.

The effect is, not for the first time, to denigrate poor people by offering a distorted picture of their lives and to keep alive spurious claims about protest which hail back to the era when the apartheid system governed the country.

The consensus between parts of the media and the DA presents protest in South Africa as something abnormal, which must be organised by sinister forces if it is to happen at all.

Protests are still presented as unusual events - the media insists that there has been a "wave of protest" triggered by the election campaign. But protest is commonplace in townships and shack settlements, where most poor people live.

Every now and then - as now - the media announces that protest has increased. In reality, South Africa has experienced constant high levels of protest since 1973, when workers in the port city of Durban struck for higher wages, with only a brief pause between 1994 and 1997. This was prompted, no doubt, by hopes that democracy had ended the need to protest. So, what the media really mean when they announce a "wave" of protest is not that there are more protests, but that they have noticed them more.

At the same time as attention was fixated on protests in DA controlled areas, Klerksdorp and Potchefstroom in North West province and Steynsrus in the Free State were also gripped by protest. None of the commentaries mention these events, which happened in ANC municipalities and so couldn't have been caused by a desire to embarrass the opposition.

Horror at the fact that the protest was organised harks back to the apartheid period. The authorities claimed then that black people were content with their lot. When protest erupted, it had to be because it was organised by agitators who manipulated people into believing that there was something wrong with legalised racism.

All protest is organised. So are cake sales and shopping expeditions - any activity in which human beings cooperate needs organising. But that doesn't mean, as those who mention organisation claim, that people are forced to protest by the organisers.

Unless there is evidence that organisers forced unwilling people to protest, harping on the fact that a protest is organised is like noting that people won't go to an event unless someone invites them. There's no evidence that anyone has been forced to take part in the current protests.

Anyone who knows life in townships and shack settlements will know that you don't need agitators to persuade people to protest - protest organisers simply channel existing anger. Complaining about this denies the justifiable anger that poor people feel at being ignored by both public and private power holders.

If these protests were organised by the ANC, this also says less than we are told. First, the DA and the country's third biggest party, the Economic Freedom Fighters, sometime organise protests directed at the ANC. It's not clear why these are acceptable but not those which the ANC might organise against them.

Second and more important, in the areas where poor people live, many protests are organised by the ANC - including many which are directed at the ANC.

The ANC has, for many years, dominated the townships. This continues even in those areas governed by the DA. In Johannesburg and Tshwane, the DA governs with only about a third of the vote because the ANC still wins all the wards in these areas. Since this is typical of much of the country, protests often reflect tensions within the ANC - one part is protesting at another. One reason the ANC lost Tshwane in 2016 is that its branches organised protests directed at the mayoral candidate chosen by the party leadership.

Politicians and journalists who find it interesting that the ANC organised a protest are again showing that they have no idea how township protest works. Nor does this, in the absence of other evidence, show that people have been manipulated or forced to protest.

Poor township conditions do not justify another way of denigrating the poor favoured by media and politicians - explaining protests away as "service delivery protests".

The term "service delivery" is deeply undemocratic. It implies that the role of citizens in a democracy is to wait while those in government who know better "deliver" to them. The democratic view is that everyone is entitled to an equal say in the decisions which affect them - including a say in how government serves them. The "service delivery" explanation reduces citizens to people who benefit or suffer from decisions over which they have no control.

More important, the "service delivery" cliché doesn't describe why people protest. The issues vary but, in each case, people are saying that their views and needs are ignored - that they have no voice. They don't want government to "deliver" to them, they want it to listen to them. Journalists often say people are engaged in a "service delivery protest" because they cannot be bothered to ask them why they are protesting.

None of this means that the ANC is the victim of injustice. South African electoral politics are rough and the ANC is guilty of as many assaults on the truth as its opponents.

What it does show is that the default position of the mainstream is to denigrate poor people. They are courted at election time and noticed when their protests spill out of townships, affecting the lives of the insider minority who monopolise public life.

For the rest, the insiders who dominate debate claim regularly that everything they do favours poor people - but never ask the poor what they favour. And, when poor people are persuaded by local organisers or ambitious politicians that they have an opportunity to be heard by taking to the streets, they are reduced by the insiders to passive consumers of "delivered" services or pawns in the hands of agitators.

All of which explains why poor people have been on the streets for more than 40 years.

Three Trucks Burnt As Protests in Kroonstad Spill Over to Steynsrus 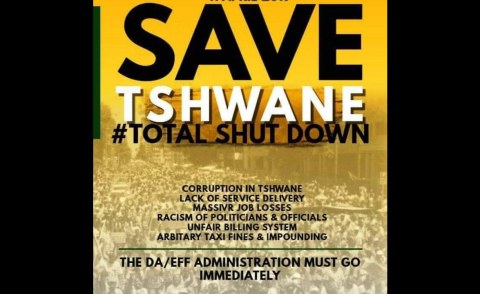 Will South Africa See a 'Watershed' 2019 Election?
Tagged:
Copyright © 2019 The Conversation. All rights reserved. Distributed by AllAfrica Global Media (allAfrica.com). To contact the copyright holder directly for corrections — or for permission to republish or make other authorized use of this material, click here.