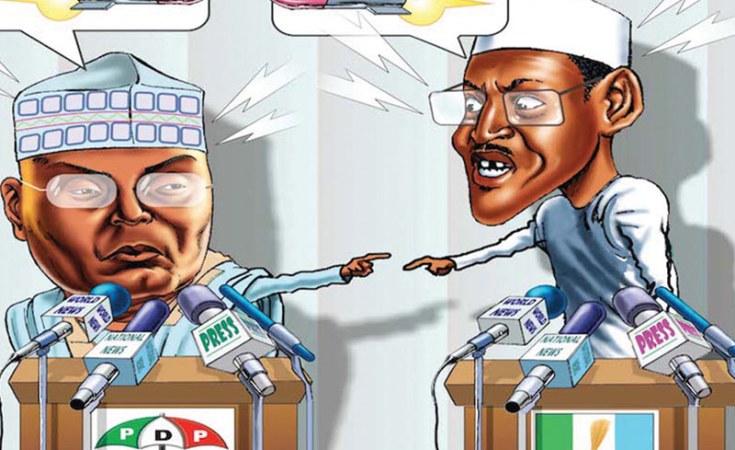 President Muhammadu Buhari has challenged Atiku Abubakar, the People's Democratic Party (PDP), candidate to produce and tender his educational certificates, indicating the schools attended by him, with dates.

The challenge was one of the planks of Buhari's response to Abubakar's petition at the Presidential Election Tribunal.

In the filing by a team of lawyers led by Wole Olanipekun (SAN), Buhari debunked Atiku's and PDP's claim that he was not qualified to run for President.

The President said he was far more qualified than Atiku and on the contrary, it was Atiku that was not qualified to run for the office.

Buhari said he did not, "at any time, provide any false information in Form CF00] submitted to the lst respondent, either in 2014 or 2018.

"The affidavit of compliance to the 2019 Form CF001 was correct in every material particular.

"Petitioners themselves are also not oblivious of the fact that respondent possesses far more than the constitutional threshold expected for a candidate contesting for the office of President of the Federal Republic of Nigeria.

"The respondent avers that he is far more qualified, both constitutionally and educationally, to contest and occupy the office of President of the Federal Republic of Nigeria than the 1st petitioner (Atiku); and that in terms of educational qualifications, trainings and courses attended, both within and outside Nigeria, he is head and shoulder above the 1st petitioner in terms of acquisition of knowledge, certificates, laurels, medals and experience.

"Respondent states further that it is the 1st petitioner, who is not qualified to contest the office of President of the Federal Republic of Nigeria, and challenges the educational credentials and certificates of the 1st petitioner.

"1st petitioner is hereby given notice to produce and tender his educational certificates, indicating the schools attended by him, with dates."

Buhari faulted the entire petition filed by the PDP and Atiku,noting that they are more about pre-election issues, which the Court of Appeal, sitting as a tribunal lacked jurisdiction.

He also argued that the petitioners told lies against themselves in the petition and made conflicting claims which the tribunal cannot grant.

Buhari argued that by virtue of Section of 137of the Electoral Act, petitioners cannot question the results of elections in states where they claim to have won and still retain themselves as petitioners.

Buhari faulted the petitioners' claim that the election was marred by corrupt practices and substantial non-compliance with the Electoral Act.

The President also faulted the petitioners' claim that they won the election, insisting that, by the result announced by the Independent National Electoral Commission (INEC), he and his party, the All Progressives Congress (APC), won the last presidential election election.

"The entire reliefs are not justifiable, as the petitioners, who claim to have scored majority of lawful votes in substantial number of states, are also questioning their own return in those states.

"The alternative relief sought is self-defeating, apart from being frivolous.

"The election to the office of President on 23rd February, 2019, was conducted in substantial compliance with the provision of the Electoral Act, 2010 (as amended)," he said.

Buhari, challenged the petitioners to produce "specifics of website: www.factsdontlien .com, including its domain owner, proprietor, lessee, lessor, etc., pleaded in paragraph 29 of the petition.

"Details of the electronic data on the servers of the 1st respondent (Inec), including the time, the details were downloaded, the person who downloaded them and the means of downloading (paragraph 29 of the petition).