South Africa: 'We are a people for whom others have died' - Archbishop Thabo Makgoba 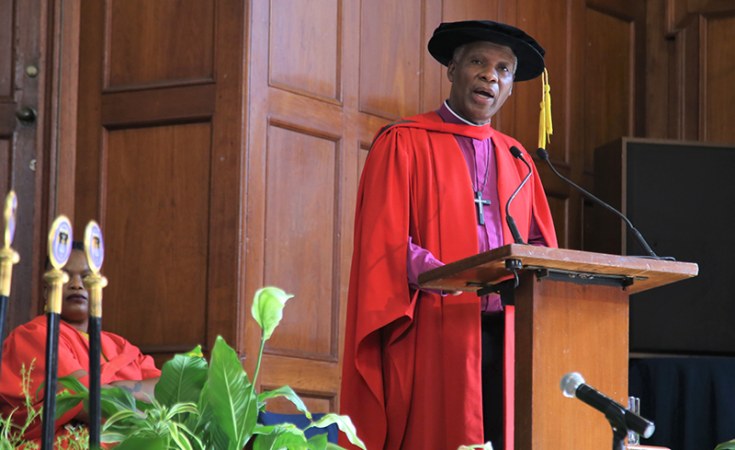 Cape Town — It was a time of reflection for Anglican Archbishop of Cape Town Thabo Makgoba as he addressed Humanities graduands on the final day of the University of Cape Town's (UCT) autumn graduation season.

Makgoba's son Nyakallo Masilo Makgoba was among the jubilant students capped at the morning ceremony, graduating with his honours in politics, philosophy and economics.

Makgoba urged the graduands to draw inspiration from their "forebears", including Black Consciousness Movement leader Steve Biko and a list of other anti-apartheid activists like Abram Onkgopotse Tiro, Mthuli kaShezi and Mapetla Mohapi, who he said were committed to their studies while simultaneously fighting for liberation – but lost their lives in the process.

"I share these reflections to remind us that students graduating today follow in a proud tradition, the only difference between then and now being that your forebears learned under extremely trying conditions in which, as well as studying, they also carried the burden of fighting for freedom," he said.

But despite the sacrifices of so many, Makgoba said South Africa remains a wounded nation, which has not yet fully healed from the atrocities of apartheid.

"We are still a hurting nation. The scars we carry still cut deep. The flashes of joy that come with graduation ceremonies on campus are tempered by [a] flare of unpleasant emotions on another," he said.

Makgoba was referring to an incident at the University of Johannesburg (UJ) earlier this month when a student, in an on-stage protest, refused to accept his degree and accused the institution of racism.

"[It was] such an unpleasant episode. But we also celebrate the burst of exhilarating dance that punctuated this year's graduation ceremonies of the University of the Western Cape, the University of KwaZulu-Natal and Mangosuthu University [of] Technology."

He urged the graduands to "cherish moments such as this", to lead by example and to always aspire to be leaders who will leave a lasting legacy, and who the coming generation will look up to.

Students celebrate their achievements with their families, teachers and friends at the penultimate ceremony of the 2019 graduation season.

Speaking directly to his son, Makgoba said: "Nyakallo should appreciate the difference that the years of struggle [of] the generation that came before him has made so that he can be where he is."

He added that while he was in no position to "prescribe" how graduates should celebrate their achievement and success, he hoped they would choose to "uphold common standards of public decency".

"Look at yourself and the learning times of your life. As the American novelist Alice Walker said: 'We are a people for whom others have died'."