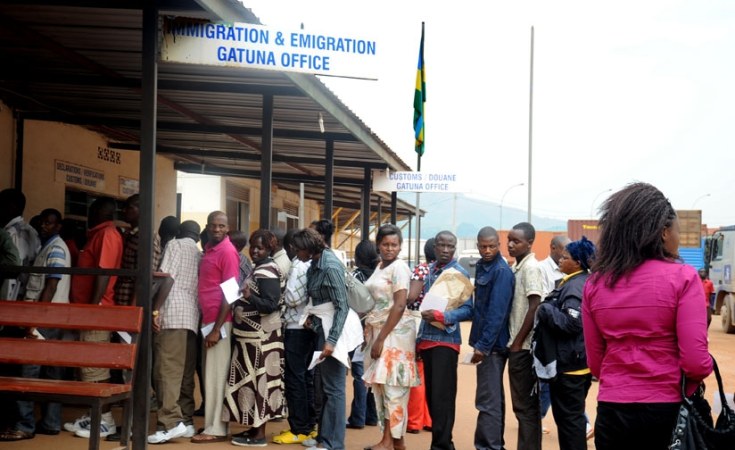 Rwandans living in the Gatuna border town can now cross over to Uganda without much restrictions, for the first time in two months, as tensions between the two neighbours begin to ease.

However, Rwandans from other border points are still barred from crossing, seven weeks after Rwanda issued a warning against travelling to Uganda.

Rwanda stopped its citizens from crossing into Uganda, accusing Kampala of illegally arresting, torturing and deporting its citizens.

Uganda on the other hand, is accusing Rwanda of spying on its territory and infiltrating its security agencies.

The two countries further accused each other of economic sabotage.

But as both countries seek to end the impasse behind closed doors, signs have emerged that tensions are easing, particularly for individuals living around Gatuna border.

Cleared cargo stranded at Gatuna as Uganda pleads with Kigali

"We are allowed to cross to Uganda, but for only a few hours, into buy what we need and return in the evening. In order to sustain this, we have to respect this arrangement, otherwise they can stop it," Simon Aharisimi, a Rwandan who lives in Gatuna told The EastAfrican.

Border authorities told this paper this arrangement has been ongoing for about two weeks.

"Those we allow to cross into Uganda are locals who reside in nearby areas; some of them we know by sight. Those coming from other parts of Rwanda are not allowed to cross. We will wait for authorities to direct us on the way forward," an immigration official told The EastAfrican.

Gatuna was until its closure the busiest border crossing serving Rwanda and Uganda, receiving hundreds of cross-border travellers each day.

It serves Rwandan exporters to Uganda, Kenya and South Sudan, as well as being imports from those countries, including cargo trucks to DRC and Burundi.

However, taxi drivers said were experiencing increased demand for their services because buses are not operating.

"We have replaced buses for now. It has been good business for us the past few weeks. We can now cross till Kabale as long as we return the same day. This means more money for us," Francois Niyomugabo, a Rwandan taxi driver, told The EastAfrican.

But the same cannot be said for locals in Kagitumba, another busy border town. Residents said the travel restriction is now in 7th week, has led to loss for livelihoods and scarcity of basic commodities.

While Ugandans can travel to Rwanda unhindered, they are not authorised to bring back goods with them, which has resulted in a supply deficit in local Rwandan markets.

Now with no work opportunities, I don't know how many people can afford that," said Alex Mugisha, a Rwandan residing in Kagitumba cell, in Nyagatare district.

Rwanda, Uganda Traders Resort to Smuggling as Borders Remain Shut
Tagged:
Copyright © 2019 The East African. All rights reserved. Distributed by AllAfrica Global Media (allAfrica.com). To contact the copyright holder directly for corrections — or for permission to republish or make other authorized use of this material, click here.