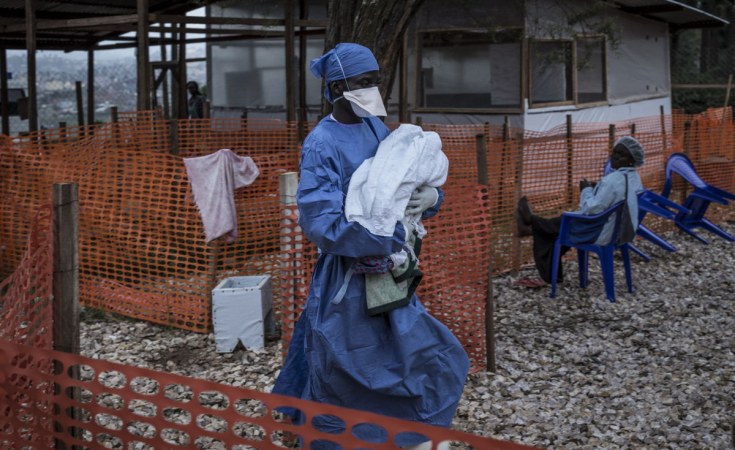 Rebels in the Democratic Republic of the Congo attacked a hospital on Saturday, in the latest in a series of attacks on Ebola treatment centers and hospitals in the region.

One of the militants was killed and four more arrested after the attack on the Katwa hospital in the city of Butembo in the northern province of North Kivu, said Butembo Mayor Sylvain Kanyamanda.

Butembo city's deputy mayor, Patrick Kambale Tsiko, told the Associated Press news agency that the attackers were armed with machetes and tried to burn down the center.

The attack came one day after a World Health Organization doctor, Richard Valery Mouzoko Kiboung, was shot dead in an assault by armed militiamen on Butembo University Hospital, according to the WHO.

WHO said the epidemiologist had been deployed to help combat Ebola in the region.

Tsiko cited witnesses as saying the Friday attackers wrongly blamed foreigners for bringing the deadly virus to the region.

The attacks by rebels, as well as community resistance, have further complicated efforts to contain what has become the second-deadliest Ebola virus outbreak in history.

The number of new cases jumps each time treatment and prevention work is disrupted -- the disease can spread quickly and can be fatal in up to 90% of cases.

DRC declared its tenth outbreak of Ebola in August 2018, in northeastern North Kivu province, before the virus spread into the neighbouring Ituri region.

The DRC's North Kivu region had never faced an outbreak of the hemorrhagic fever before, and health workers have battled misinformation and rumors.

Some residents did not even believe Ebola was a real disease, while others try to avoid treatment if they fall ill.

"The fear of being forcibly hospitalized adds to the poor public image of Ebola treatment centers," Natalie Roberts, head of emergencies for the medical charity Doctors Without Borders, wrote earlier this month. "These structures are associated with a life-threatening illness, isolation and the use of protective equipment which makes the staff unrecognizable and intimidating."

In North Kivu and Ituri, around 1,300 people have already contracted Ebola, and more than 850 have succumbed to the virus.

In an attempt to curb the outbreak, around 100,000 people have already received an experimental Ebola vaccine in the region.

WHO Ebola Responder Killed in Attack on the Butembo Hospital

Ebola Not a Problem for DR Congo Alone - Uganda Minister
Tagged:
Copyright © 2019 Deutsche Welle. All rights reserved. Distributed by AllAfrica Global Media (allAfrica.com). To contact the copyright holder directly for corrections — or for permission to republish or make other authorized use of this material, click here.