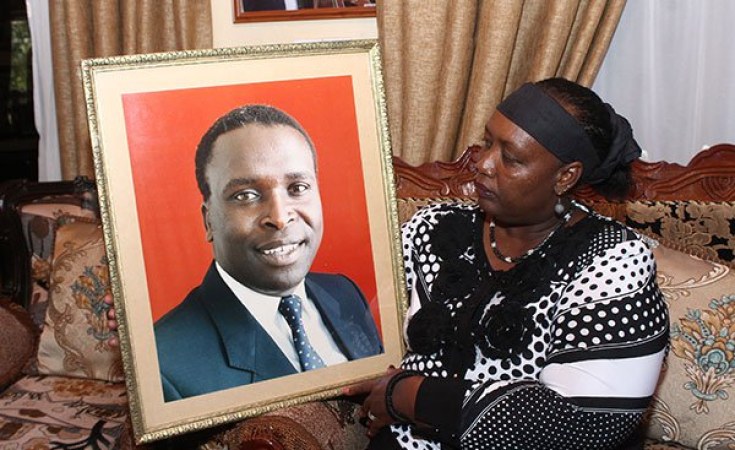 As the family makes burial arrangements, friends and relatives continued trooping to the deceased's home in Kabimoi village in Eldama Ravine, Baringo County.

Jonathan, 64, a celebrated rally driver, died in a Nakuru hospital on Friday.

Governor Kiptis said his administration will work with the national government to give Jonathan a befitting send-off.

He said the county, Kenya and the world was mourning Jonathan, fondly known as JT, a talented rally driver. "We condole with the family and pray that God gives them necessary fortitude to bear the loss," Mr Kiptis said.

Mr Noah Chebii, a brother-in-law and co-driver of Jonathan between 1989 and 1992, described him as a generous and kind colleague.

He said the Jonathan put family first and had established various businesses, creating employment for many. Together with Mr Chebii, Jonathan won the Sanyo Rally in 1992. "He was a jovial personality who never wanted others to suffer. We have lost a great person and it will be hard to replace him," said Mr Chebii.

He revealed that, at one time, Jonathan paid hospital bills for nearly 100 patients at the Mercy Hospital in Eldama Ravine.

When the Nation visited his home in Kabimoi, workers were busy erecting tents and arranging seats for mourners with a condolence book has been opened in one of the tents.

Meanwhile, the family through former President Moi's Press Secretary Lee Njiru, Sunday said they were touched by the tributes and condolences that have been pouring in.

"We, the entire Moi family, have been touched by the messages of condolences and expressions of sympathy from Kenyans and friends from all over the world. We thank you all for grieving with us following the passing on of Jonathan.

"The family, with heavy hearts, wishes to inform all friends that our patriarch, Mzee Daniel arap Moi, might not be able to personally receive those wishing to offer their condolences. This inevitable stand does not in any way lessen our gratitude," read the statement.

Mr Njiru said the family had asked for prayers and understanding as they mourned JT.

They promised to give updates on the burial arrangements.

Coincidentally, Jonathan died at the beginning of the Easter holiday, which is the period during which he used to participate in the Safari Rally.

Several leaders, including President Uhuru Kenyatta and Opposition leader Raila Odinga, have condoled with the family.

Baringo Senator Gideon Moi, who is Jonathan's younger brother, eulogised him as a "selfless family man, amiable, social and down-to-earth and an industrious human being", through a public statement.

Jonathan attended Prince of Wales (Nairobi School) and studied agriculture in Delaware in the United States. He was a farmer and businessman.

Ill Health Forces Daniel arap Moi to Watch Son's Burial From Afar
Tagged:
Copyright © 2019 The Nation. All rights reserved. Distributed by AllAfrica Global Media (allAfrica.com). To contact the copyright holder directly for corrections — or for permission to republish or make other authorized use of this material, click here.