A new pressure is being mounted here for the release of Agnes Taylor, the ex-wife of former President Charles Taylor from a British prison 2 years after she has been detained.

Ms. Agnes Reeves Taylor, like her ex-husband Taylor who is facing a 50 year jail sentence in a British prison is being charged with alleged war crimes committed here during the Liberian civil war.

But a group calling itself the Patriotic Consciousness Association of Liberia (PACA), which has mounted the campaign for her release says she committed no such crimes and is calling on the Liberian Government to intervene for her immediate release.

"... We are re-echoing our appeal to him [President Weah] to please invite the British ... Ambassador here to get detailed information so as to take immediate step to bring relief to Madam [Agnes Reeves] Taylor and her family," PACA National Executive Chairman Mr. E. Frederick Baye told a press conference Monday, 22 April in Monrovia.

Madam Agnes Taylor was arrested in east London in early June 2017 for four torture offences allegedly committed between 1989 and 1991 during Liberia's civil war.

The British authorities charged her with three counts of intentionally inflicting severe pain or suffering on an individual in the performance of her official duties.

Additionally the British authorities charged Madam Agnes Taylor with allegedly agreeing to conduct that amounts to the commission of torture.

An estimated 250,000 people were reported killed during Liberia's civil conflict, properties destroyed and many more displaced by the bloodshed.

But the head of a campaign launched in Liberia and dubbed "Free Agnes Taylor," Mr. Baye calls on President Weah to see reason to respond to the inquest from the British government through Liberia's Ministry of Foreign Affairs.

He claims that this call seems not to have claimed government's attention, prompting PACA to reecho its appeal through the press conference held Monday.

During the press conference, PACA also released copies of letters it has written Liberia's Minister of Foreign Affairs Gbehzongar M. Findley and the Chief of Mission at the Embassy of the United Kingdom near Monrovia, detailing their request for the release of Dr. Taylor.

Addressing the press conference, Mr. Baye notes that Dr. Taylor was never named as person of interest on Liberia's Truth and Reconciliation Commission (TRC) list, yet she is being treated as a common criminal in British cell.

According to Mr. Baye, PACA got information that Madam Agnes Taylor is being held in solitary confinement in British cell in category "A" prison which denies her of going anywhere without a bodyguard.

Mr. Baye raises suspicion that somebody somewhere is using this means to amass wealth at the expense of Dr. Taylor, even though he fails to name the person involved.

For now, he says PACA is making a passionate plea to the "invincible hands," but warns however that the next time the group appears, "we will be naming individuals" that are allegedly involved in hunting the Taylor family.

By the statement, Mr. Baye announces that the "Free Agnes Taylor" campaign has been launched here to seek the release of Dr. Taylor from British cell.

He vows on behalf of PACA that the group will extend the campaign to parts of West Africa, and if need be, it will take it as far as Great Britain.

According to him, PACA will use every means available to solicit help to facilitate extension the Free Agnes Taylor campaign to Great Britain to let the British authorities know that Dr. Taylor "does not have any criminal record."

Also addressing journalists at the press conference, a sister of Madam Agnes Taylor, Madam Laurice Reeves Bryant calls on the Liberian government to come to the rescue of its citizen to end her continuous detention by the British authorities.

She argues that Dr. Agnes Reeves Taylor's name is not on the list of the 200 persons published by the TRC.

"Liberia has never charged her or accused her of any crimes. If she was, she would have been on that list of TRC listing of all of those people ... ; she's not on that list, but yet then still she's being held in prison for almost two years," says Madam Bryant.

She argues that if her sister had committed a crime, somebody would have raised it during the TRC deliberation that went on for a year.

In furtherance of her argument, Madam Bryant indicates that her sister Dr. Taylor is a Liberian, and the incident for which she is being held did not happen on British soil while the victims are also non- British people.

She believes that her sister should be sent to Liberia if the Liberian government says she committed a crime.

But under international law-any country can apply jus cogen to bring perpetrators of war crimes and crimes against humanity to book regardless of where the crimes were committed and who were the victims.

Madam Bryant acknowledged that under international jurisdiction law, [an accused may be held by another country if that person's country did not take action after being accused of alleged international crimes-such as torture, murder or any war crimes or crimes against humanity].

But she insists on the call for her sister's release because she has not been accused of committing any crime in her country Liberia. "But yet then still she's been picked up," Madam Bryant laments.

What appears to worry Madam Taylor more is that her sister is placed in category "A" in the British cell, which according to her puts the detainee in the "same category as a terrorist."

She says her sister has been denied bail by the British authorities four different times.

"This extra judicial undertaking on the part of UK judiciary, leaves us with the conclusion that the UK judicial system is a direct part of a politically motivated ploy to invoke guilt by association against Dr. Agnes Reeves Taylor, on account of her past affiliation as the former wife of Ex Liberian President Charles Ghankay Taylor," PACA complains in a letter to Minister Findley dated 16 April 2019.

"Your Excellency, let me bring to your attention that Dr. Agnes Reeves Taylor has never been a subject of any indictment and/or inquest or person of interest in Liberia's Truth & Reconciliation Commission (TRC) Report," PACA says in a letter to the UK Embassy here on 16 April.By Winston W. Parley 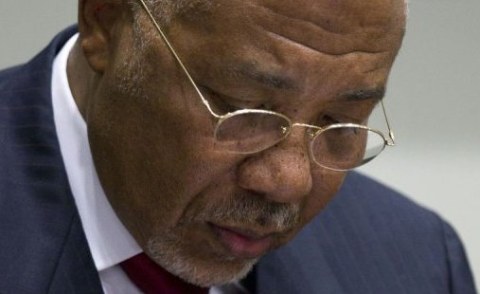 Britain Charges Ex-Wife of Former Liberian President
Tagged:
Copyright © 2019 The New Dawn. All rights reserved. Distributed by AllAfrica Global Media (allAfrica.com). To contact the copyright holder directly for corrections — or for permission to republish or make other authorized use of this material, click here.