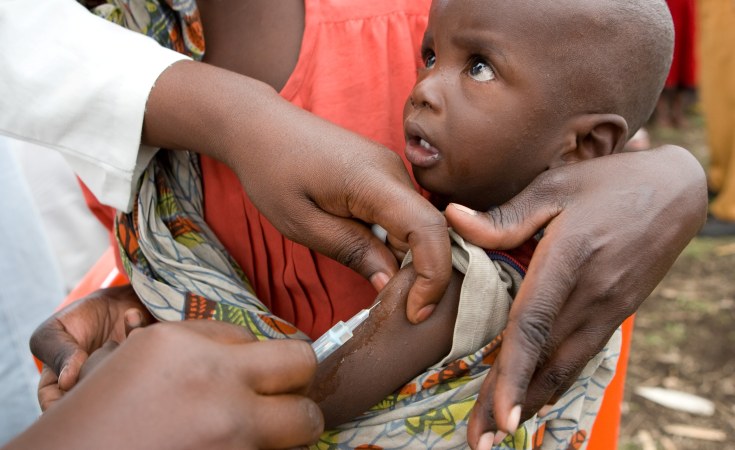 The United Nations Children's Fund (UNICEF) says an estimated 169 million children missed out on the first dose of the measles vaccine between 2010 and 2017 or 21.1 million children a year on average.

UNICEF's Executive Director, Ms Henrietta Fore made this known on Thursday in commemoration of the World Immunisation Week marked annually between April 24 and 30.

According to her, widening pockets of unvaccinated children have created a pathway to the measles outbreaks hitting several countries around the world today.

"The ground for the global measles outbreaks we are witnessing today was laid years ago; the measles virus will always find unvaccinated children.

"If we are serious about averting the spread of this dangerous but preventable disease, we need to vaccinate every child, in rich and poor countries alike, " she said.

The director said that two doses of the measles vaccine were essential to protect children from the disease.

She said, however, due to lack of access, poor health systems, complacency, and in some cases, fear or scepticism about vaccines, the global coverage of the first dose of the measles vaccine was reported at 85 per cent in 2017.

According to her, this figure has remained relatively constant over the last decade despite population growth.

"Global coverage for the second dose is much lower, at 67 per cent; the World Health Organisation recommends a threshold of 95 per cent immunisation coverage to achieve so-called 'herd immunity'.

"In high income countries, while coverage with the first dose is 94 per cent, coverage for the second dose drops to 91 per cent, according to the latest data.

"The United States tops the list of high-income countries with the most children not receiving the first dose of the vaccine between 2010 and 2017, at more than 2.5 million.

"It is followed by France and the United Kingdom, with over 600,000 and 500,000 unvaccinated infants, respectively, during the same period.

"In low- and middle-income countries, the situation is critical.

"In 2017, for example, Nigeria had the highest number of children under one year of age who missed out on the first dose, at nearly 4 million.

"Worldwide coverage levels of the second dose of the measles vaccines are even more alarming.

"Of the top 20 countries with the largest number of unvaccinated children in 2017, nine have not introduced the second dose.

"Twenty countries in sub-Saharan Africa have not introduced the necessary second dose in the national vaccination schedule, putting over 17 million infants a year at higher risk of measles during their childhood, " Fore said.

She said that UNICEF in partnership with the Measles and Rubella Initiative and Gavi, the Vaccine Alliance, was helping to address this measles crisis by negotiating vaccine prices; the cost of the measles vaccine is now at an all-time low.

She said also that the partnership would help countries identify underserved areas and unreached children; procure vaccines and other immunisation supplies.

"Working with relevant countries to introduce the second dose of the measles vaccine in the national immunisation schedule; Cameroon, Liberia and Nigeria are on track to do so in 2019.

"Finally, we are introducing innovations like the use of solar power and mobile technologies to maintain vaccines at the right temperature.

"Measles is far too contagious; it is critical not only to increase coverage but also to sustain vaccination rates at the right doses to create an umbrella of immunity for everyone, " Fore said. (NAN)

Ebola's Not The Only Deadly Virus in DR Congo
Tagged:
Copyright © 2019 Vanguard. All rights reserved. Distributed by AllAfrica Global Media (allAfrica.com). To contact the copyright holder directly for corrections — or for permission to republish or make other authorized use of this material, click here.