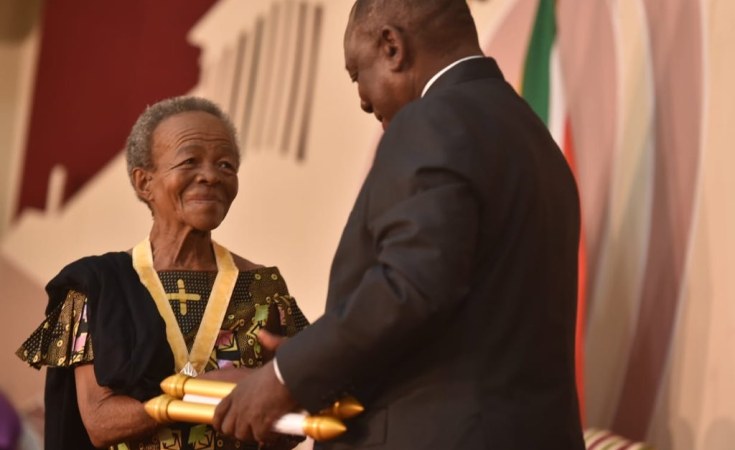 President Cyril Ramaphosa has bestowed the 2019 National Orders Awards on distinguished local citizens and eminent foreign nationals who contributed towards the improvement of South Africans' lives in various ways. The Presidency's official Twitter account shared images of several of the recipients.

"A member of society merely exists. A citizen embraces the concept of civic virtue - of dedication to the common welfare of their community and their country."

These were the words of President Cyril Ramaphosa as he awarded the six National Orders on distinguished South Africans and eminent foreign nationals on Tuesday.

The orders are the highest awards that the country, through the President, bestows on citizens and eminent foreign nationals who have contributed towards the advancement of democracy and who made a significant impact on improving the lives of South Africans.

The awards took place at the Sefako Makgatho Presidential Guesthouse in Pretoria in an investiture ceremony led by the President as the grand patron of the awards.

"We have among us today the very best of such citizens. You have gained recognition for your dedication to personal, professional and other improvement; to putting yourselves at the service of your country; and for your willingness to do your part to make South Africa a better place," said President Ramaphosa.

The family of the late Environmental Affairs Minister Edna Molewa, who received the order of the Baobab in gold, also attended the ceremony and received the award on her behalf.

Speaking ahead of the investiture ceremony, President Ramaphosa reflected on the floods that have ravaged KwaZulu-Natal and claimed the lives of an estimated 70 people. He visited the affected areas on Wednesday.

He said the various acts that he saw in Durban of ordinary citizens rallying around those affected, demonstrated the possibilities of what citizens of the country can do.

His reflections on the heroic acts were an introduction to the award for the Order of the Mendi for bravery. Thapelo Tambani, a selfless nine year old boy who lost his life on 28 February 2018 after a successful effort to save the life of his friend Mulalo Sien Muelelwa, received the order in silver.

Tsedu, who received the order of the Ikhamanga which recognises South African citizens who have excelled in the fields of arts, culture, literature, music, journalism and sport, emphasised that the onus is on each and every citizen to build the country.

"This is the only country we have and this South Africa has to work and for it to work it means each one of us has to do the best we can in whatever field.

Tsedu said in citizens being the best version of themselves and giving their all to the work that they do, South Africa will move forward.

"Whatever you do, do it the best way you can. That way, collectively, we move ourselves forward," said Tsedu.

Father of Heroic Boy, Who Gave His Life to Save Drowning Friend, Receives National Order for Bravery 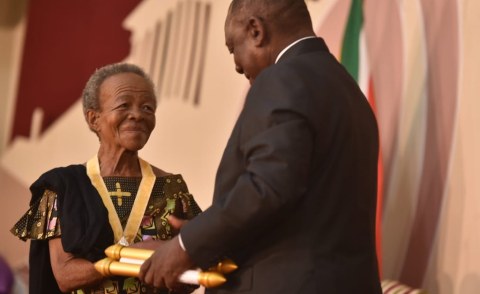 South Africa's President Bestows 2019 National Order Awards
Tagged:
Copyright © 2019 SAnews.gov.za. All rights reserved. Distributed by AllAfrica Global Media (allAfrica.com). To contact the copyright holder directly for corrections — or for permission to republish or make other authorized use of this material, click here.