Sudan: In Sudan, Tens of Thousands March for Civilian Rule 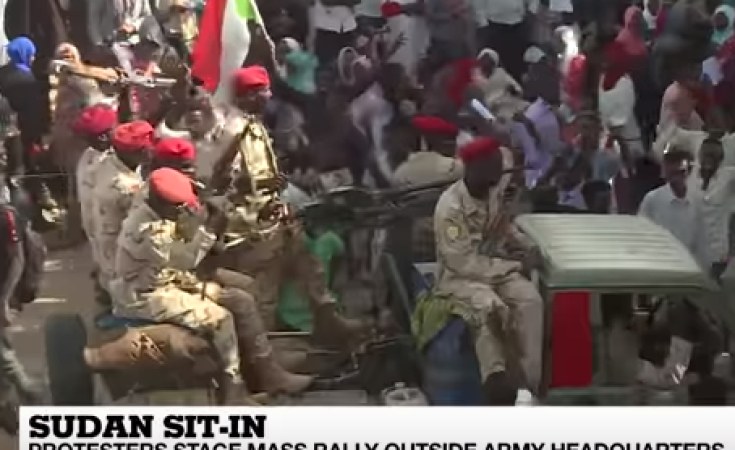 France 24/YouTube
An army vehicle rides though the April 25 protest in Khartoum.
Voice of America (Washington, DC)
By Naba Mohiedeen

Khartoum — Tens of thousands of people marched in Sudan's capital Thursday for what organizers called a "million strong march" in support of civilian rule. The rally took place even though Sudan's ruling Transitional Military Council (TMC) and opposition groups agreed to form a committee to resolve their disagreements.

Three members of the TMC resigned late Wednesday after the SPA called for the march.

The TMC identified them as Lieutenant-Generals Omar Zain al-Abideen, Jalal al-Deen al-Sheikh, and Al-Tayeb Babakr Ali Fadeel. But their resignations were not immediately accepted.

Mohamed al-Wasilla took part in Thursday's protest and has also been part of a two-week sit-in outside army headquarters in Khartoum. He said the timing of the resignations is no coincidence.

He said the military council has realized the effectiveness of their sit-in; it puts pressure on them. The people are the power now, he said, but the military thinks they can defuse them by playing games with time.

The SPA was demanding the three lieutenant-generals be dismissed and tried over their alleged roles in a crackdown that killed dozens of protesters.

Sudan's opposition and the TMC agreed late Wednesday to form a committee to try to resolve their disagreements.

The spokesman of TMC Shams Eldin Kabashi stressed in a press conference after that they agreed in principle to push the situation forward.

He said the TMC and the protesters’ Forces for Freedom and Change are complimentary to each other. They’re looking forward to establish what fulfills Sudanese ambitions, said Kabashi.

Political analyst Mutasim Ahmed said the military resignations and meetings with protesters are a good sign.

He said now that trust has been restored between the two main forces, Freedom and Change forces and the TMC, and that those two forces have changed the former regime. But their mission now, said Ahmed, is to get rid of the former regime’s roots.

After four months of anti-government protests, the military ousted Bashir on April 11 after he spent three decades in power.

Military leaders took over, promising elections within two years. But protesters are demanding immediate civilian rule and have refused to leave the streets.

On Thursday, Reuters news quoted opposition leader Sadiq Mahdi as saying Sudan could face a counter-coup if military rulers and the opposition don’t reach an agreement on transition.

Sudan's Military and Opposition Agree on Joint Council
Tagged:
Copyright © 2019 Voice of America. All rights reserved. Distributed by AllAfrica Global Media (allAfrica.com). To contact the copyright holder directly for corrections — or for permission to republish or make other authorized use of this material, click here.