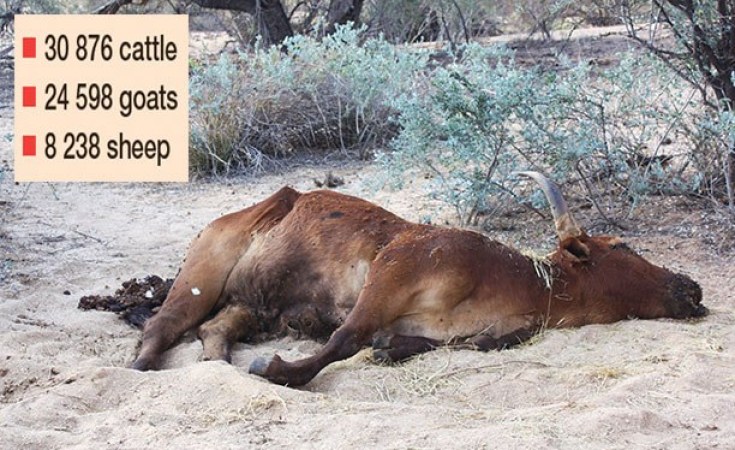 Paulus Kiiyala Shiku/Nampa
The carcass of an ox lies on the ground at the Okombahe settlement in the Erongo Region in 2016. Communal farmers in Okombahe, Omatjete, Okaumbaha and other areas in the region are losing animals on a large scale due to the drought.
The Namibian (Windhoek)
By Luqman Cloete

NAMIBIA'S aggregate cereal production for the 2018/2019 season is woefully short of the national requirement as the country expects a substantial reduction of at least 53% of last season's harvest, and over 42% below the average production.

This was revealed in the latest crop prospects, food security and drought situation report compiled by the agriculture ministry's agro-business unit, titled 'National Early Warning on Food Security' this week.

The report states that the maize production forecast for the Zambezi, Kavango West and Kavango East regions showed a considerable reduction of 79% of last season's harvest, and 78% below the average production.

It also predicted a considerable reduction in the expected millet harvest of at least 78% of last season, and 68%% below the average output.

Sorghum production is the hardest hit with a reduction of over 75% of last season's harvest, and about 86% below the average production.

The report attributed the country's poor agricultural production, which leaves Namibia's two million plus population vulnerable to any food price increases, to extremely poor rainfall in the 2018/19 season, compounded by extremely high temperatures that exacerbated evaporation of the little moisture received.

According to the Namibia Meteorological Services' rainfall report, March 2019 was the fifth consecutive month with suppressed rainfall over a larger part of the country.

The report states that pockets of food insecurity are also being reported in various areas which suffered poor agricultural production due to long dry spells or floods during the 2017/18 rainfall season, a situation worsened by the drought conditions prevailing in the country.

Grazing conditions thus continue to deteriorate in most parts of the country, amidst poor and below average rainfall experienced countrywide.

The central, southern, north-central and north-western regions of the country are the most affected by poor rainfall, and livestock mortalities as a result of malnutrition were reported.

"In most areas, grazing is reported to vary from fair to poor (in the Zambezi, Kavango West and Kavango East regions) to very poor elsewhere in the country," the report states. 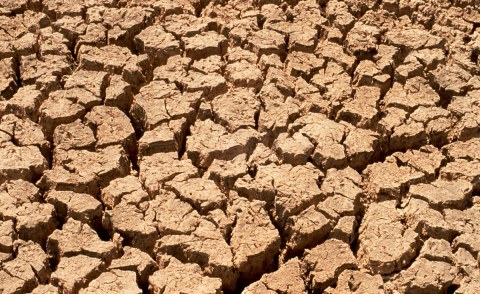 What You Need to Know About the Threats to Life on Our Planet
Tagged:
Copyright © 2019 The Namibian. All rights reserved. Distributed by AllAfrica Global Media (allAfrica.com). To contact the copyright holder directly for corrections — or for permission to republish or make other authorized use of this material, click here.