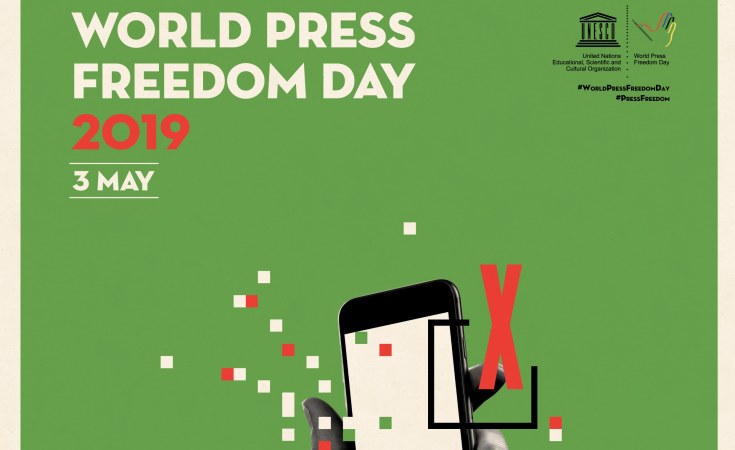 Sub-Saharan Africa has not avoided the latest international decline in press freedom. Hatred towards journalists, attacks on investigative reporters, censorship (especially online and on social networks), and economic and judicial harassment all undermined independent reporting and quality journalism in a continent where press freedom saw significant changes in 2018.

The situation in Namibia (23rd), newly restored to its position as Africa's best-ranked country, Burkina Faso (36th) and Senegal (49th), which all have pluralist media, has little in common with the situation in Eritrea (178th) and Djibouti (173rd), which are information black holes where no independent media are permitted. As in 2017, the situation in 22 of sub-Saharan Africa's 48 countries is classified as either "bad" (red on the map) or "very bad" (black).

Marked progress by some, disturbing decline by others

Ethiopia (110th), which used to be near the bottom of the Index, has soared a spectacular 40 places following a change of government. Between releasing journalists and bloggers, lifting the ban on several hundred websites and media outlets, and embarking on an overhaul of legislation that is extremely repressive for journalists, the new prime minister, Abiy Ahmed, has taken swift and promising steps to improve press freedom and, for the first time in more than ten years, no journalist was in prison at the end of 2018. Gambia (92nd) has jumped 30 places, confirming the promising evolution seen after dictator Yahya Jammeh's departure. New media outlets have been created, journalists have returned from self-imposed exile and the criminalization of defamation has been declared unconstitutional.

Angola (109th), which also had a change of government in 2017, has seen more moderate progress. The justice system recognized the right to inform when it acquitted two journalists who had been prosecuted at the behest of a former prosecutor general. But the prohibitive cost of operating licences and the lack of political will to open up broadcasting to new operators limits pluralism and prevents a faster rise in the Index. Unfortunately, regime change does not always mean progress. In Zimbabwe (down 1 at 127th), the security apparatus clings to its bad habits under Robert Mugabe's successor, the now elected President Emmerson Mnangagwa, and RSF registered many, often violent, attacks on journalists.

In Tanzania (down 25 at 118th), the change of president in 2015 was accompanied by unprecedented attacks on the press and the country continued its disturbing decline in 2018. President John "Bulldozer" Magufuli is in the process of joining the club of press freedom's predators. Journalists are being attacked with complete impunity and the authorities have made no serious attempt to find Azory Gwanda, a journalist who went missing in November 2017. Two press freedom defenders who were investigating his disappearance were arrested in November 2018 and forced to leave the country.

Mauritania (down 22 at 94th) has continued its precipitous fall by failing to release Mohamed Cheikh Ould Mohamed Mkaitir, a blogger defended by RSF.  His initial death sentence for apostasy in 2014 was commuted to two years in prison in November 2017. He should have been released a year and a half ago, but is being held incommunicado, ostensibly for safety reasons. He was arrested over an article condemning the use of religion to justify slavery, which is illegal but still practised in Mauritania. The subject is off limits for journalists. The deportation of a foreign journalist in March 2018 for trying to cover the story was the second such case in the space of a year.

As in 2017, Somalia (164th) has continued to be Africa's deadliest country for the media. Three journalists were killed in 2018, two by Al-Shabaab's Islamist militants and one by a police officer. A similar death toll was registered in the Central African Republic (145th), which fell 33 places in the Index after the triple murder of three Russian reporters who had gone there to investigate the presence of Russian mercenaries.

Investigative journalism continues to be very dangerous in sub-Saharan Africa, even in countries far from the death throes of the civil war that threatens journalists in the CAR. Ghana (27th), Africa's best-ranked country in 2018, has lost this status for failing to protect a group of investigative journalists who were threatened, especially by a ruling party parliamentarian, after making a documentary about Ghanaian soccer corruption. One of its members was gunned down on an Accra street in January 2019.

In the Democratic Republic of Congo (154th), the African country where RSF registered the most press freedom violations in 2018, a filmmaker and his cameraman had to flee their homes to escape assailants after making a documentary about the eviction of villagers from land claimed by then President Joseph Kabila. Félix Tshisekedi, elected as Kabila's successor in January 2019, needs to prioritize the protection of journalists and to reform the legislation under which press offences are punishable by imprisonment if he wants the Congolese media to be the "real fourth estate" that he promised in his inaugural address.

Liberia (down 4 at 93rd) has decriminalized press offences but the authorities often target Front Page Africa, the country's leading investigative newspaper, whose staff were arrested in April and whose publisher was threatened by a government minister with imprisonment at the end of a year after exposing several corruption cases allegedly involving the government. In Nigeria (120th), the police questioned a journalist with Premium Times, a leading daily, for several days in an attempt to identify his sources. In Mozambique (down 4 at 103rd), the governor of a northeastern province with an Islamist insurrection, told journalists that they were no longer allowed to cover attacks and violence in the province. The order was immediately implemented.  A well-known investigative journalist was briefly arrested in December, while a local media journalist has been held since the start of the year.

Clamping down on election coverage

The latest African elections have seen many attempts to restrict reporting, including arrests of journalists, disruption of social networks and Internet cuts. In Cameroon, where the former head of the state-owned radio and TV broadcaster, Amadou Vamoulké, has been arbitrarily detained for more than two and a half years, President Paul Biya's reelection for a seventh term was accompanied by many cases of intimidation, attacks and arrests of journalists often labbeled as opponents. During the DRC's presidential election, the authorities withdrew the accreditation of the correspondent of the French public broadcaster RFI, which has a large audience in the DRC, banned local broadcasting by RFI, and disconnected the Internet.

Suspending media outlets, especially international ones, continues to be a widely-used weapon to suppress critical coverage and a public debate. In Burundi, the initial six-month ban imposed on two foreign radio broadcasters, the BBC and VOA, ahead of a referendum on a change to the constitution, was extended in early 2019, while a local radio station was illegally shut down in Mali (112th) by the governor of the capital, Bamako, between the first and second rounds of the presidential election.

In Sudan (175th), RSF has registered 100 arrests of journalists and scores of  confiscations of newspaper issues since late December 2018, which saw the start of the biggest protests in more than 30 years calling for President Omar al-Bashir's removal and new elections. Sudan's National Intelligence and Security Service (NISS) keeps on seizing entire newspaper issues as they come off the press, in part to throttle the publishers economically.

The three methods traditionally used to harass and gag the media – violence, arrests and closures – are nowadays often bolstered by a new, growing range of economic forms of pressure. Tanzania passed a law requiring payment of a 900-dollar fee to register a blog or news website – an exorbitant sum whose sole aim is to limit online news and information as much as possible. In neighbouring Uganda (125th), President Yoweri Museveni, who often insulted journalists in 2018, has imposed a daily tax on use of online social networks and their associated messaging services that is unprecedented in Africa. On the pretext of combatting gossip, the tax penalizes journalists and bloggers who frequently use these services to produce and share information.

A similar proposed tax has been announced in Zambia (down 6 at 119th). One was considered and then abandoned in Benin (96th). The strongest economic pressure has been seen in Mozambique where, one year ahead of general elections, the authorities decided to introduce a prohibitive range of media accreditation charges under which it could cost several thousand dollars to come and film in Mozambique or base oneself there as a foreign correspondent. These charges are still being discussed but, if they are applied, Mozambique would become Africa's most expensive country for reporters.