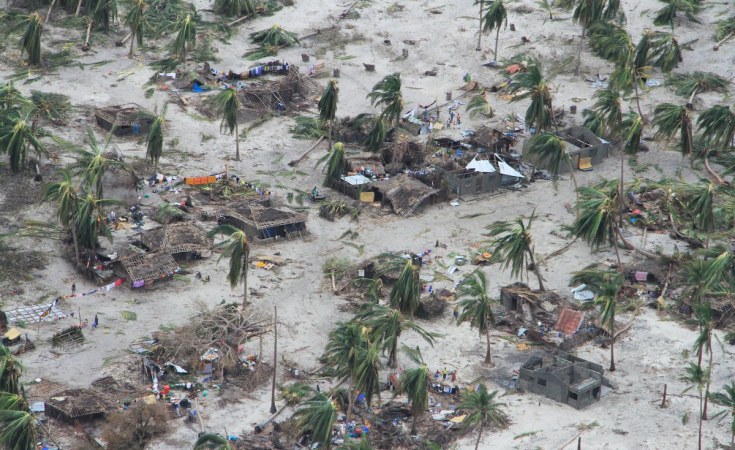 Thousands of people in remote areas of storm-lashed Mozambique were homeless Saturday and bracing for imminent flooding, food and water shortages as Cyclone Kenneth flattened entire villages, leaving rescuers struggling to reach them.

Kenneth, which has killed five people, struck northern Mozambique late Thursday, barely a month after the country was hit by one of the worst storms in its history, which claimed hundreds of lives.

"Too many small communities are completely destroyed, not a single house is standing anymore. I could see around 10 communities in this situation," said Saviano Abreu, a spokesman for the UN's Office for the Coordination of Humanitarian Affairs (OCHA).

"On Ibo (island), not only the main village but also other communities are destroyed," he added after a first air reconnaissance mission.

In the village of Nacate, south of Macomia in the cyclone-ravaged Cabo Delgado province, many homes were destroyed, leaving families to fend for themselves in the open.

Maria Mendosa and Assan Madal and their young children Pizere, Naturesa, Ancha, Ida and Luigi managed to salvage a few chairs, a table, a mattress and cooking pots from their ravaged home.

"This will be a very complex humanitarian operation. I would say shelter is a huge priority, as rains are forecast in the coming days and water and food will be urgently needed," Abreu said.

The UN's children's agency UNICEF said about 368,000 children were "at risk and potentially in need of lifesaving humanitarian support" following the second storm.

The first reported death was caused by a falling coconut tree in Pemba.

"Tropical Cyclone Kenneth has now 'stalled' over Cabo Delgado... where it is expected to bring heavy rains in the coming days," the OCHA said.

"The stalling of the weather system is likely to cause significant flooding in Cabo Delgado, as well as high rainfall in southern Tanzania, over the next 10 days," the agency warned.

In the coastal Macomia district, people were beginning to repair the damage by Saturday evening.

Engineers were busy repairing power lines, while, in the light of a lorry's headlamps, others set about reconstructing a bank which had been destroyed.

It said Kenneth -- which has receded into a tropical depression -- had damaged or destroyed 3,300 homes, and about 18,000 people were housed in emergency shelters.

On Saturday morning, emergency workers including Brazilian soldiers, OCHA personnel and officials from UNICEF, arrived in Pemba to assess the damage.

"We really need to know about the cities with 90 percent damage. Now we look for some aircraft and evaluate all the locations," Captain Kleber Castro of the Brazil rescue service told AFP on the tarmac at Pemba airport.

On Ibo, home to 6,000 people, 90 percent of homes had been flattened, a spokesman for the INGC, Antonio Beleza, said Friday.

"It looks like the island has been bombed... It is biblical," said Kevin Record, a South African tour operator and owner of a hotel on Ibo.

The work of rescuers has been hamstrung by damaged infrastructure and communications lines.

"A lot of people can be impacted in the region where the flooding is large and widespread," said Castro.

"The most difficult thing is transportation -- we don't have helicopters yet. We need a lot of support, if you can help us we need support from helicopters."

Communities in central Mozambique are still reeling from Cyclone Idai, which hit on the night of March 14-15, causing killer floods that swept away homes, roads and bridges.

The storm also smashed into Zimbabwe and Malawi. In the three countries, more than a thousand lives were lost, and damage is estimated at around $2 billion (1.8 billion euros).

Cyclone Kenneth Death Toll Rises in Mozambique
Tagged:
Copyright © 2019 The Citizen. All rights reserved. Distributed by AllAfrica Global Media (allAfrica.com). To contact the copyright holder directly for corrections — or for permission to republish or make other authorized use of this material, click here.