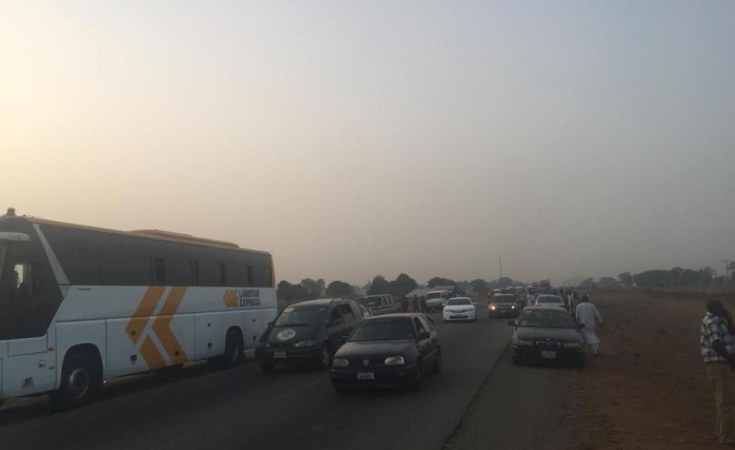 Kidnappers on Monday afternoon blocked the Kaduna-Abuja Expressway, forcing several motorists to abandon their vehicles and head for nearby bushes to avoid being abducted.

The development has left many motorists and passengers unaccounted for just as their belongings were carted away by the kidnappers.

A correspondent of the News Agency of Nigeria (NAN), who narrowly escaped the attack by the kidnappers, reports that the incident happened a few kilometres to Katari village in Kagarko Local Government Area of Kaduna State at about 3.30 p.m.

NAN also reports that hundreds of motorists travelling from Kaduna to Abuja as well as those going the other way found themselves stranded for more than 40 minutes as both lanes of the express way were blocked by cars hastily abandoned by their owners.

A NAN correspondent gathered that the bandits left the scene of the incident and moved into the bush with some of their victims before the arrival of some security men, who later cleared the road for the motorists to continue on their journeys.

Commenting on the incident, owner of the popular Shagalinku Restaurant in Abuja, Umar Shagalinku, lauded the prompt intervention of the security personnel.

He, however, called on relevant security authorities to use modern technology including helicopters to track kidnappers.

"I have been hearing about this robbery and kidnapping along Kaduna - Abuja road but today I witnessed - this is terrible and ungodly.

"I sincerely pray that authorities concerned will do something about these criminals so that motorists will feel safe while plying this important road," he said.