Nigeria: Women and Girls 'Preyed On As the Spoils of War'

Maiduguri — "They forcefully took us away and kept us like prisoners," Lydia Musa, a former Boko Haram captive who was abducted at the age of 14 during an attack on her village in Gwoza, in Nigeria's north eastern Borno State, tells IPS. Musa and two other underaged girls were captured and forced to marry Boko Haram fighters in spite of their protests that they were too young to marry.

"You must marry whether you like it or not they told us as they pointed guns at us," the now 16-year-old girl recalls.

Boko Haram's violation of the rights of women and children paints a larger picture of human trafficking, forced marriages and enslavement in Nigeria.

As the extremist group enters the 10th year of its insurgency, it remains formidable enough to abduct women and children at will, continuing "to prey on women and girls as spoils of war," Anietie Ewang, Nigeria country researcher at Human Rights Watch, said in a statement.

This West African nation has the highest incidence of Africans being trafficked through the Sahara Desert and the Mediterranean Sea to Europe. The north and north eastern parts of the country, where Boko Haram is active, have high incidences of forced marriages, while across the country there are frequent cases of young girls being 'traded' as modern day slaves.

The group, whose name means 'Western education is forbidden', is reputed to be among the five-deadliest terror groups in the world. It has been involved in a violent campaign for strict Islamic rule in north east Nigeria and in parts of the neighbouring states of Cameroon, Chad and Niger. More than 20,000 people have been killed since the start of the insurgency in 2009.

Boko Haram is also involved in the kidnapping, trafficking and enslavement of children and women. Hundreds of women and children have been abducted since the group's insurgency started. But Boko Haram's most well-known abduction occurred in April 2014, when 276 female students were taken away from their dormitory at the Government Secondary School, Chibok, in Borno State.

A few months after the Chibok girls were abducted, Boko Haram's leader, Abubakar Shekau, said he would sell them. "I am the one who captured all those girls and I will sell all of them," he said in an online video in which he justified human slavery. "Slavery is allowed in my religion and I shall capture people and make them slaves."

Consequently there have been other mass abductions of children in the region since the Chibok incident. In March 2015, Boko Haram fighters abducted more than 300 children from Zanna Mobarti Primary School in Damasak; while 116 female students from the Government Girls Science and Technical College, in Dapchi, Yobe State, were abducted in February 2018 during an attack on the school.

"The way Boko Haram hold women and children against their will is by itself a form of slavery," Rotimi Olawale of the group Bring Back Our Girls (BBOG) tells IPS. The group is involved in a powerful campaign for the speedy and effective search and rescue of the Chibok girls and other abducted women and children.

Olawale says Boko Haram is also using captives, like the Chibok girls, as "valuable bargaining chips" to collect ransoms and secure the release of their members held in Nigerian prisons. While many of the Chibok girls are still missing five years after their abduction, others escaped or were released by Boko Haram in deals made with the Nigerian government. But 112 girls are reportedly still missing.

In an apparent reference to Boko Haram, the United Nations Children's Fund (UNICEF) says that since 2012, non-state armed groups in north east Nigeria have recruited and used children as combatants and non-combatants, raped and forced girls to marry and committed other grave violations against children.

Accounts by others who escaped from Boko Haram's captivity confirm this.

Ali Mohammed is also a former Boko Haram captive. He tells IPS that while in captivity he saw Boko Haram members using captive girls as sex slaves. "At night they freely go to where the girls are kept to pick them for sex," he explains.

Another former Boko Haram captive who preferred to be called Halima says male children born through sexual slavery are being breed to be the new generation of Boko Haram fighters. Halima, who gave birth to twins (a boy and a girl), tells IPS how Boko Haram members always celebrate when a baby boy is born in their camps.

"Once they realise it is a male baby they will start shooting their guns into the air in happy mood saying that a new leader has been born," she says.

"After I delivered the babies, they carried the male in jubilation and were chatting Allah Akbar, in contrast, they did not show any joy with the female, they did not even touch her."

Boko Haram's abduction of young persons are in part aimed at turning them into fighters. UNICEF says between 2013 and 2017 more than 3,500 children, most of whom were aged 13 to 17, were recruited by non-state armed groups who used them in the armed conflict in north east Nigeria. UNICEF says the true figures are likely to be higher because its figures are only of those cases that have been verified.

Musa confirms that while in captivity she saw abducted boys being trained to be Boko Haram fighters. "In the mornings, they normally teach them how to shoot guns and carry out attacks," she says, adding that some of the boys were just 10 years old.

Boko Haram is also known to train children to become suicide bombers. A UNICEF report in 2017, says between January and August of that year, 83 children, mainly girls, were used by Boko Haram as suicide bombers. The UN's children agency said this figure was four times higher than it was for 2016.

Attempts to use legislation to address such abuses as child marriage, sexual abuse, trafficking and abduction have failed in the past. In 2003, Nigeria adopted the Child Rights Act as a legal documentation to protect children from these abuses. Currently the country's constitution does not have a minimum age of marriage. Though the Child Rights Act set the marriageable age as 18, it failed in part because a number of Nigeria's 36 states refused to domesticate the law.

"It was also a failure in states where it was adopted because it only existed on paper and was not enforced," Betty Abah, a women and children's rights activist, tells IPS.

In 2016, Nigeria's male-dominated senate voted against a Gender and Equal Opportunities Bill. The bill in part prohibits trafficking, sexual abuse and exploitation of women and children. The bill, which also prohibits forced marriage, set 18 as the minimum legal age for marriage.

According to UNICEF, 43 percent of girls in Nigeria are married off before they turn 18. Some of the lawmakers who voted against the bill cited such grounds as their religion which permitted underaged marriage.

"It sends a very bad signal that we have a long way to go if those who are supposed to make laws to protect women and children feel these laws are not necessary," Abah says.

In the meantime, Musa, may have fled the captivity of Boko Haram but she is too terrified to return home. She now lives in Maiduguri, which is also in Borno State and about 130 kms from Gwoza.

She tells IPS she is home sick. "I am always praying for the crisis to end so that I can return home, for now I cant go back because I don't want to risk being taken away by Boko Haram again."

The Global Sustainability Network ( GSN ) http://gsngoal8.com/ is pursuing the United Nations Sustainable Development Goal number 8 with a special emphasis on Goal 8.7 which 'takes immediate and effective measures to eradicate forced labour, end modern slavery and human trafficking and secure the prohibition and elimination of the worst forms of child labour, including recruitment and use of child soldiers, and by 2025 end child labour in all its forms'.

The origins of the GSN come from the endeavours of the Joint Declaration of Religious Leaders signed on 2 December 2014. Religious leaders of various faiths, gathered to work together "to defend the dignity and freedom of the human being against the extreme forms of the globalization of indifference, such us exploitation, forced labour, prostitution, human trafficking" and so forth.

The Fine Line Between Cultural Norms and Child Trafficking 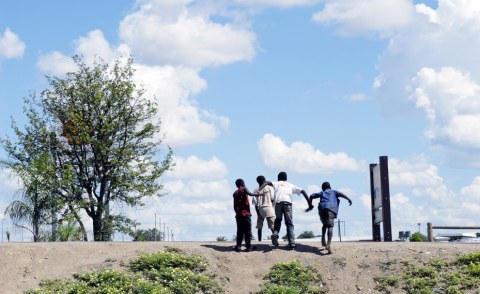 The Exploitative System That Traps Nigerian Women in Slavery
Tagged:
Copyright © 2019 Inter Press Service. All rights reserved. Distributed by AllAfrica Global Media (allAfrica.com). To contact the copyright holder directly for corrections — or for permission to republish or make other authorized use of this material, click here.