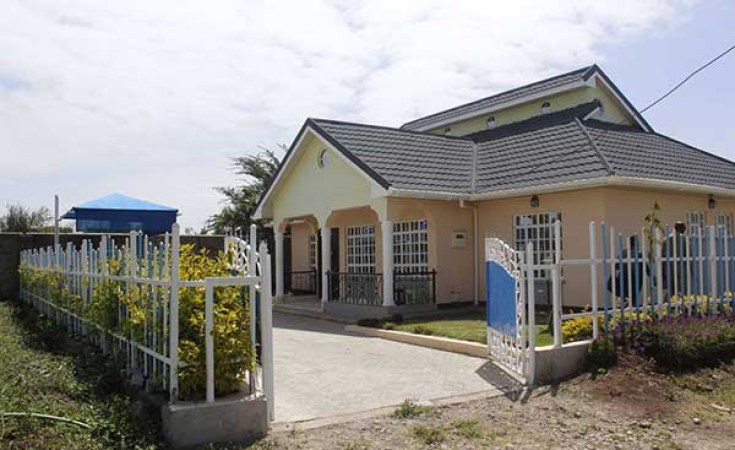 Daily Nation
A newly-built house. Kenyans have opposed the plan by the government to deduct part of workers’ salaries to fund its housing project.
The Nation (Nairobi)
By Paul Wafula

The government plans to spend Sh2.7 trillion in the next financial year.

It will also splash more billions on stalled projects, such as dams and failed irrigation projects, even as its budget hole deepens.

The deficit will grow to Sh607.8 billion from Sh559 billion this year, which means that the government will be forced to borrow more to plug the shortage.

Most of the money will go to running of the government after Sh1.7 trillion was set aside for recurrent expenditure, which finances salaries, fuel for cars, stationery and refreshments.

The second biggest cost in the 2019/20 budget is repayment of debts and devolution. Treasury plans to spend Sh551 billion in interest payments for loans and pension. This is Sh61 billion more than the Sh490 billion this year.

Salaries and wages will take Sh470 billion in the new budget, up from the Sh425 billion the government is spending in 2018/19.

In the current financial year, the government is spending a total of Sh2.5 trillion, meaning that the next budget will expand by at least Sh252 billion.

The spending plan presented in Parliament on Tuesday showed that the Jubilee government will spend Sh450.9 billion in projects under its Big Four Agenda.

From this, about Sh76.7 billion will go towards what the Jubilee administration calls the driver projects while the remaining Sh374.1 billion will be pumped into enablers of the Big Four projects.

It notes that the allocations to other critical sectors, such as education, infrastructure, energy and social protection will remain protected in order to achieve the targeted objectives.

Dam construction will cost the taxpayer another Sh25.1 billion this year, despite having received nothing from the billions spent in previous projects.

Among the interventions is Sh2 billion set aside for the value chain support and Sh3 billion for the cherry coffee revolving fund.

Miraa farmers will have something to smile about after Treasury allocated Sh1 billion for the miraa revitalisation project, while sugarcane farmers should only expect Sh300 million to clear their debts.

Irrigation projects will get another Sh7.9 billion despite previous interventions being dogged by controversy. In total, Sh15.6 billion will be used to enhance food and nutrition security.

The affordable housing programme will get a total of Sh10.5 billion, while the manufacturing sector will receive Sh3.8 billion worth of interventions.

To plug the budget deficit, the Treasury says it will, once again, be seeking to pile up more debts.

This will see it borrow Sh324.3 billion from external markets. Another Sh289.2 billion will be borrowed from domestic markets, while the remaining Sh5.7 billion will come from other domestic receipts.

"The external debt sustainability indicators illustrate that Kenya's risk has increased from low to moderate, but this is expected to be short-term as government continues with its fiscal consolidation reform and implements liability management strategy aimed at restructuring short-term commercial loans by replacing them with long dated maturities," the budget document adds.

Treasury has however revised the deficit figures for the current financial year, increasing it from Sh559 billion to Sh608 billion.

Counties have been allocated Sh371 billion, a drop from the Sh376.5 billion allocated in the 2018/19 financial year, which has now been revised downwards to Sh367.4 billion through the supplementary budget.

The Kenya Revenue Authority (KRA) will have a rough year from end of June when the new budget rolls out.

It will be expected to collect Sh1.8 trillion as ordinary revenues. The total revenue collections, including Appropriation in Aid (AIA), will be Sh2.1 trillion.

The Contingencies Fund will receive Sh5 billion while the Equalisation Fund has been allocated Sh5.8 billion.

From the Sh68.9 billion allocated to the energy sector, Sh8.6 billion will go towards geothermal development, while power transmission will receive Sh54.3 billion.

The Sh190 billion allocated for the National Security docket will see the National Intelligence Service receive Sh37.7 billion while defence will get the lion's share at Sh104.5 billion.

Other monies will be spent on leasing of police motor vehicles, the national communication and surveillance system, as well as equipping of the National Forensic Laboratory.

From the Sh202 billion allocated to the education sector, Treasury plans to spend Sh59.4 billion on free day secondary education, including NHIF for students.

The free primary education and the school feeding programmes will get Sh13.4 billion and Sh1.8 billion each.

The other billions will be spent on recruitment of teachers (Sh2 billion), digital literacy (Sh2.4 billion) and subsidy for KNEC for examination fees waiver (Sh4 billion), among others.

Higher education will get Sh96.4 billion while the higher education's loans board will receive Sh12.8 billion to run its operations.